The lecture, titled “An Examination of Hate Speech and Free Speech on College Campuses,” was widely criticized by members of the Vassar community, who accused Jacobson of being a white nationalist.

“The lecture originally was advertised as ‘Hate Speech’ is Still Free Speech, Even After Charlottesville,’” Jacobson wrote in a blog post. “The name was changed because the sponsoring student group filed for funding under another title, so we were asked to use that approved title.”

Jacobson says the topic of the planned discussion of hate speech “sent a portion of the campus into a vicious smear campaign against me,” with hundreds of students, faculty, and staff “whipped into a frenzy by false and malicious accusations, originating it appears with a student group Healing 2 Action, but also spread by the Vassar Student Association.”

“In addition to maligning me personally, accusations were spread falsely claiming White Nationalist supporters might come to campus to target students of color, LGBT students, Jewish students, and others,” he added.

According to the Vassar Conservative Libertarian Union, a chapter of Young Americans for Liberty that sponsored Jacobson’s speech, the vocal opposition to the October 25 lecture continued even after Jacobson’s appearance, VCLU President Pietro Geraci told Campus Reform in an email, reporting that several members of the club have been targeted by flyers posted all around campus.

“While there were protests outside, the lecture went forward as planned with no interruptions,” Geraci said. “However, today posters...were discovered that targeted members of the group. Non-members were also depicted.”

The flyers, titled “VCLU Loves Hate Speech,” include pictures of more than a dozen YAL students and a caption saying, “If you see them on campus, TELL THEM WHAT YOU THINK.” 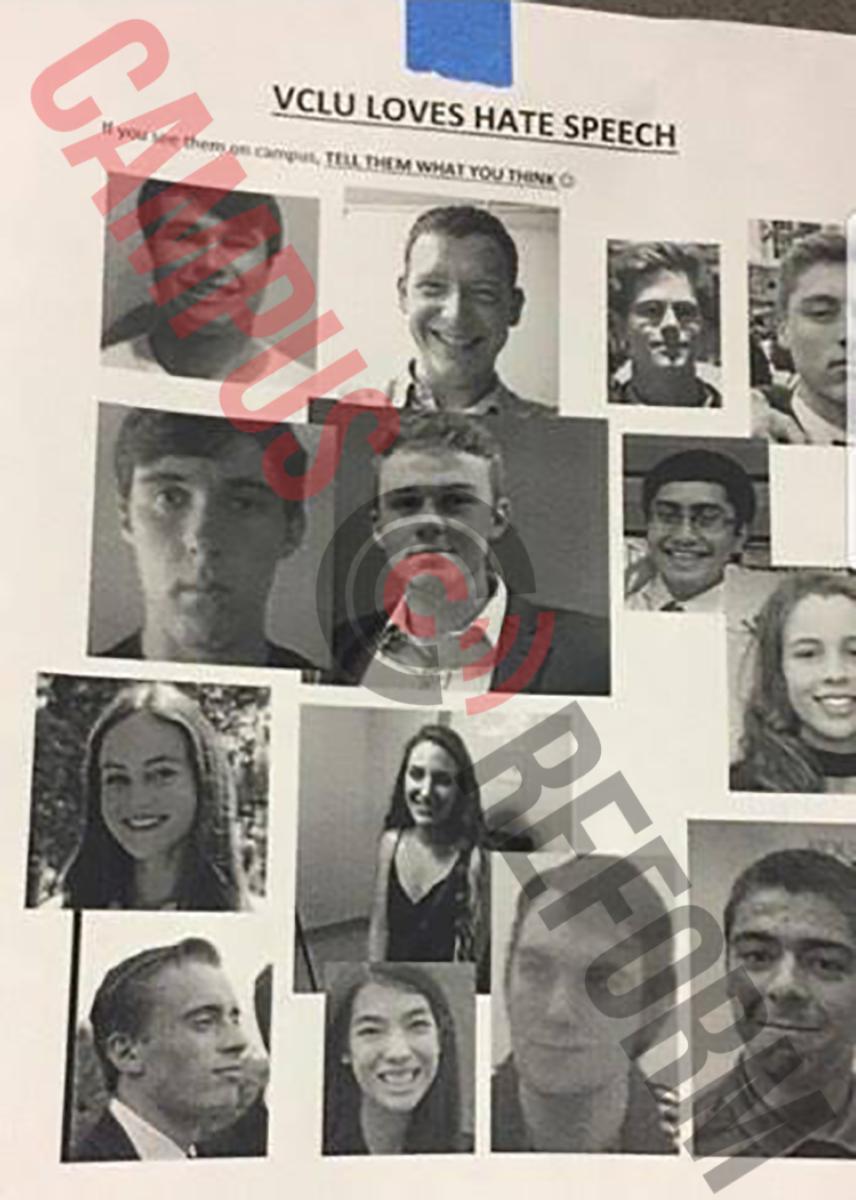 Geraci told Campus Reform that the administration “is taking this very seriously” and that he has been in contact with the college president and the school’s Safety and Security department.

UPDATE: Amanita Duga-Carroll, Vassar's director of media relations, confirmed that the school is taking steps to address the issue and support the students.

"We are taking this matter very seriously. The posters were immediately removed, and campus security has been engaged and are investigating," Duga-Carroll told Campus Reform. "The President and Dean of the College as well as support staff are reaching out to each of the students shown in these posters to provide support and point them toward available College resources."