A professor at a prestigious private university is expressing remorse for a provocative tweet about the Texas church shooting, saying “frustration” led him to lash out at the GOP and NRA.

The tweet—posted Sunday night in response to the mass-shooting at a Texas church which left at least 26 dead—suggests that the National Rifle Association and the Republican Party secretly desire such massacres.

"Now that my emotions have cooled somewhat, I do not actually believe the GOP or NRA wants mass shootings."

“There is no rational alternative. The GOP and NRA must, in fact, want mass shootings,” the professor postulated, reasoning that “It serves their interests.” 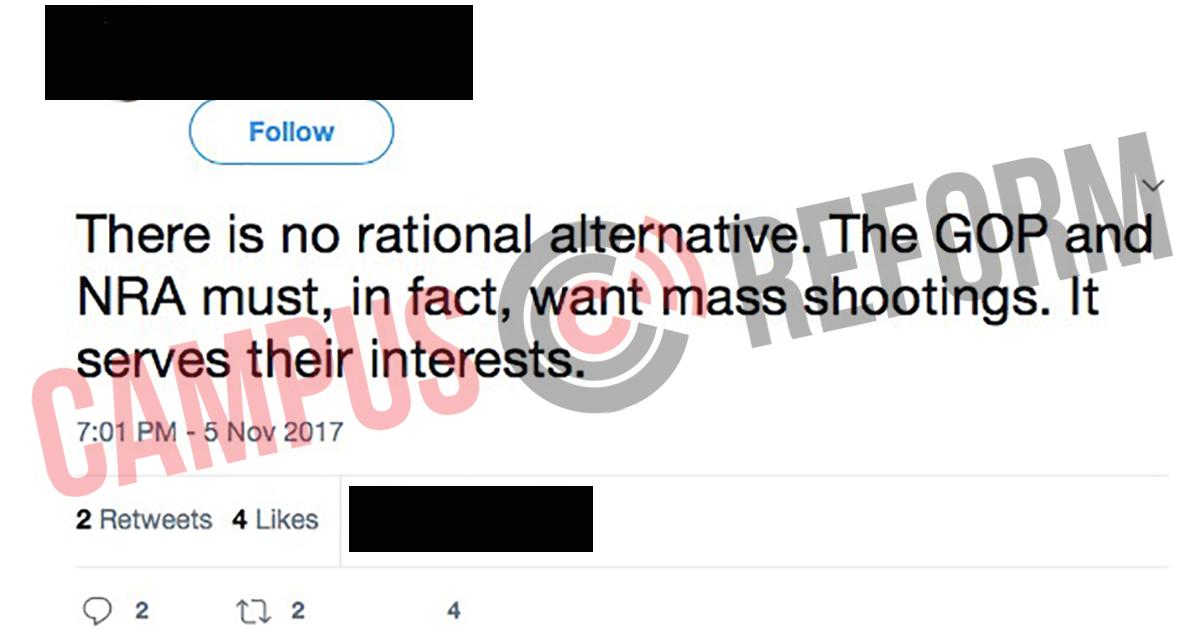 Campus Reform reached out to the professor, whose name has been redacted, in an attempt to get additional context for his comment, and received a thorough and contrite response, which is published in its entirety below:

“The tweet was sent in a moment of supreme frustration and sorrow after hearing the news of the shooting in Texas. I kept asking myself why the GOP and NRA would not support some more aggressive efforts at gun control to stop these increasingly frequent mass shootings.

“There is so much death, so much violence, so much heartache that results from these massacres. And it seemed all we could get from the GOP, which controls most of the levers of power in the country, was ‘thoughts and prayers.’ That did not seem like an adequate response. So I asked myself, if the GOP and NRA were acting rationally and in their own interest, why would they not do more? I concluded not doing more must somehow be in their rational interest.

“Upon reflection, now that my emotions have cooled somewhat, I do not actually believe the GOP or NRA wants mass shootings. I do believe, however, that gun control is a losing issue for Democrats, and opposition to gun control tends to be a winning issue for Republicans. So although the GOP and NRA most certainly do not want mass shootings, they welcome the gun control debate because it energizes their base and helps with fundraising. So that’s what I meant when I said it was in their interest.”

The professor also added that “I do not bring my political views into the classroom” and that “my tweets are my own and do not represent my employer.” The employer is, however, listed in the professor’s Twitter bio.

When asked whether this incident might be informative in more general terms, the professor said that he thinks “we should all do what we can to live up to our highest values at all times,” but also acknowledged that, “we are all human, and sometimes, in the heat of the moment, we fall short of our own highest aspirations.”

“It is very difficult to know what the right thing is to do on social media,” the professor continued. “The default mode for Twitter discourse is vitriolic anger, and I fall into that mode myself sometimes. Twitter especially, because of the 140 character limit, encourages brief, snarky jibes over thoughtful analysis.”

The professor went on to contend that the problem is not confined merely to social media, pointing out that political rhetoric in all forms has grown increasingly harsh in the current political climate.

[RELATED: Marxist prof doubles down on ‘Trump must hang’ tweet]

“One way of thinking about angry rhetoric is to say it's divisive, failing to unite us. Another way, often espoused on the Right, is to say this is a free marketplace of ideas, and that an adversarial system allows the best ideas to rise to the surface,” the professor explained. “I think any realistic appraisal of the current situation would have to conclude that the country is, in fact, quite badly divided along ideological lines. Under such circumstances, it is hard to imagine what language could unify us.”

The professor concluded by noting that there is perhaps no perfect response to tragedies with relevance to political debates, remarking that “To say nothing seems to endorse the status quo (mass shootings, thoughts and prayers). To attack the GOP and NRA strikes you as divisive. To offer only sympathy for the victims and families seems too weak a response, especially if one believes, as I do, that policy solutions could minimize future harms.”