Prof: 'The modern GOP is nothing but white supremacy'

A Virginia Tech professor declared Monday that “the modern GOP is nothing but white supremacy” in response to a leadership squabble within a College Republicans chapter.

Matthew Gabriele, an Associate Professor of Medieval Studies at Virginia Tech University, posted the tweet Monday morning in response to an article in The Chronicle of Higher Education reporting that the Washington State University College Republicans had repudiated the re-election of its president, James Allsup, who was spotted at the white supremacist rally in Charlottesville, Virginia.

Prof: "The modern GOP is nothing but white supremacy."

[RELATED: Prof: ‘ALL white people are racist,’ ‘ALL men are sexist’]

After pictures of him at the rally surfaced, Allsup faced pressure to resign from prominent Republicans, and while he ultimately retained enough support within his own group to win re-election, his impending graduation disqualifies him from serving in that role next year.

When other users criticized Gabriele’s assertion, the professor fired back in a separate tweet, saying that “a lot of white dudes have found this tweet and they are proving, once again, that the right is SO BAD at trolling other white dudes.” 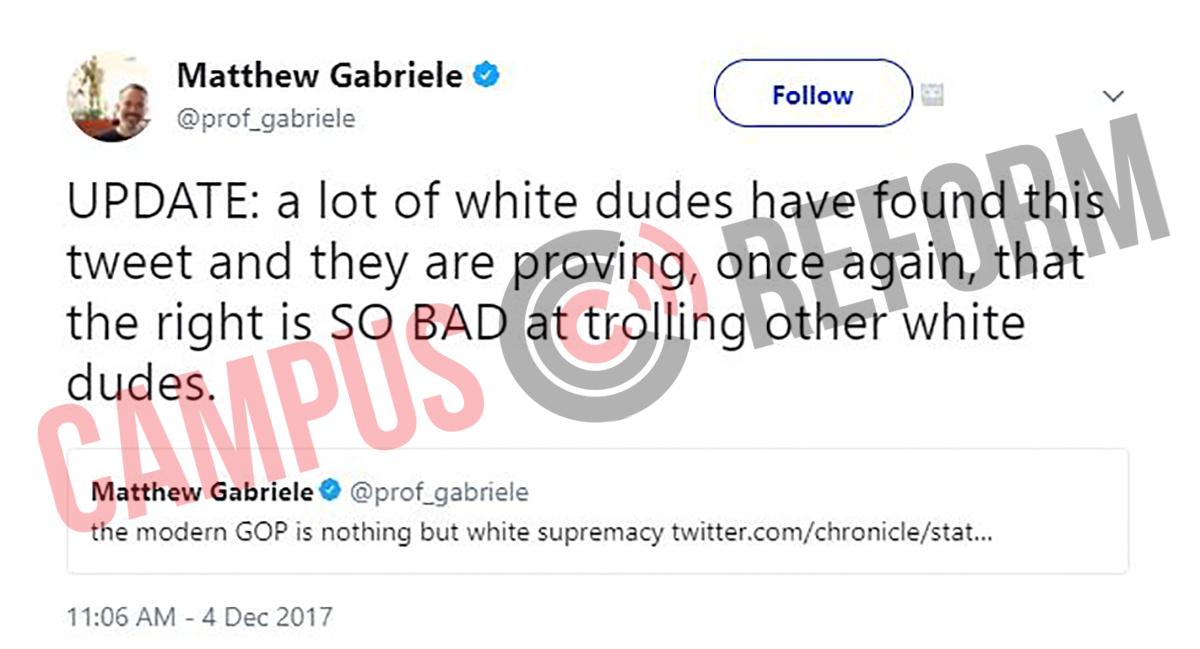 However, this is not the first time that the professor has likened the GOP to white supremacists. During the 2017 Virginia gubernatorial election, he cast similar aspersions against Republican candidate Ed Gillespie.

In a November tweet, for instance, he stated, “so @edwgillespie is incompetent and running a racist campaign! Two-fer! #VAGov.”

Going even further, he elaborated in another tweet that “@EdWGillespie is running a racist campaign. Kneeling. Confederate statues. BS immigration fears. Pedophiles. Gillespie has no honor #vagov.”

Another user seized the opportunity to turn the argument around on Gabriele, though, responding with a link to an article about the controversial Latino Victory Fund ad against Gillespie and asking, “Why don’t you admit your entire party runs racist, fearful campaigns?”

According to Open Secrets, Gabriele donated $750 to Barack Obama’s campaign in 2012.

Campus Reform reached out to Gabriele for comment, but has not received a response.