Yale University psychiatry professor Bandy Lee has deleted her Twitter account amid mounting allegations that she is not licensed in  Connecticut, her current state of employment.

Accusations have been circulating on Twitter that the prominent Yale professor, known for her public diagnosis of President Donald Trump as having a “mental impairment” and who recently met with lawmakers on Capitol Hill to discuss the issue, isn’t actually a licensed psychiatrist.

"We at the APA call for an end to psychiatrists providing professional opinions in the media about public figures whom they have not examined."

In fact, Campus Reform discovered that according to the State of Connecticut, Lee’s “physician/surgeon” license expired in 2015, and her application for reinstatement has been “pending” ever since. 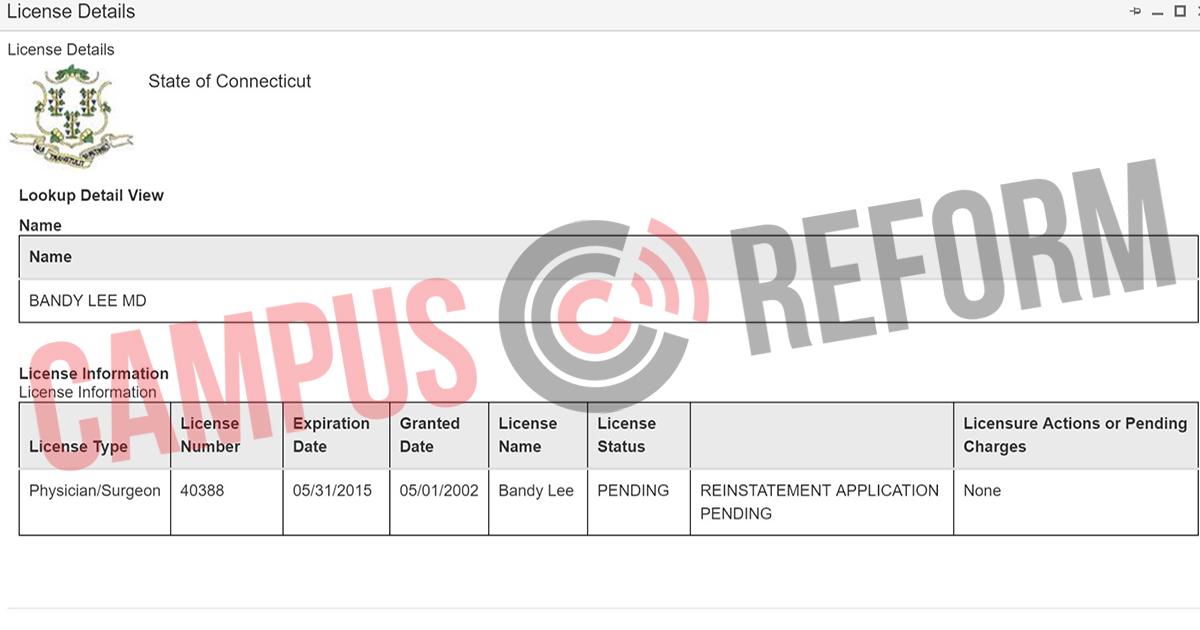 In response to Campus Reform’s inquiry on the matter, Lee simply stated that “I need only one license,” but declined to elaborate for nearly three weeks despite Campus Reform's requests for clarification.

Without mentioning Lee specifically, the American Psychiatric Association (APA) put out a recent statement in which it condemned the diagnoses of public officials whom psychiatrists have not personally examined, invoking what is commonly referred to as the Goldwater Rule.

“We at the APA call for an end to psychiatrists providing professional opinions in the media about public figures whom they have not examined, whether it be on cable news appearances, books, or in social media,” the statement read, according to The Washington Examiner.

Lee and a colleague, however, responded to criticisms in a Wednesday POLITICO piece, in which they claim that “it’s perfectly OK to question the president’s mental state,” since they are “psychiatrists.”

UPDATE (January 30, 2018): Lee has informed Campus Reform that she is licensed in New York, where she practices, rather than Connecticut, where she teaches.

"It does not matter for my academic affiliation. I occasionally do assignments in Connecticut, at which time I reinstate my license; it takes all of two weeks to do so, as long as I have a license elsewhere," she told Campus Reform January 29.

Additionally, Lee told Campus Reform that she deleted her Twitter account due to threats that were made against her, and not because of questions surrounding her license.