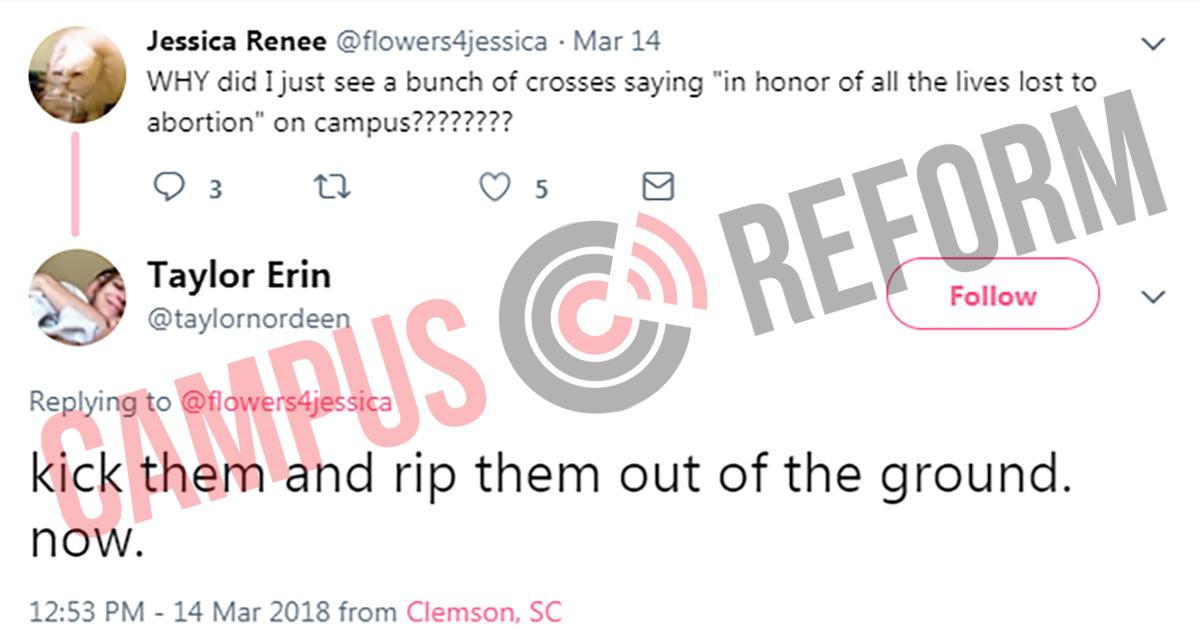 Yet another pro-life display set up by a conservative student group was destroyed by vandals last week, this time at South Carolina’s Clemson University.

The school’s Young Americans for Freedom (YAF) chapter set up the March 14 display, which consisted of 202 white crosses, each one equalling “30 babies killed by abortion in South Carolina,” according to signs accompanying the display, which was dedicated “In memory of the lives lost to abortion.”

"[The vandalism] shows that conservative views and beliefs aren’t always welcomed on campus even if you go to a school where the student body is fairly conservative."

YAF Chairwoman Morgan Bailey told Campus Reform that the vandalism occurred when she “had to leave the display for a short amount of time,” saying, “I ran outside and saw that the crosses were gone except for a few,” at which point witnesses “told us it was a person with long blonde hair.”

According to Bailey’s account, most of the signs were discovered a short time later crumpled in a men’s restroom.

Bailey later emailed a Clemson University dean about the incident and filed a report with the school’s police department in the hopes that the vandal would be caught.

“I hope that CUPD catches who did this and that the university makes it clear that students should not shut down another student’s’/organization’s speech just because they disagree,” Bailey added, saying, “we would’ve reset it up on Thursday but we only had like 30 crosses leftover.”

Bailey said she had hoped that her classmates “would be tolerant of our views and would not vandalize our displays or posters,” but that the experience proved her optimism about Clemson’s campus to be misplaced.

“My YAF members and I knew it’d be a possibility that our display would be torn down but we didn’t think it would actually happen,” she remarked, saying the vandalism “shows that conservative views and beliefs aren’t always welcomed on campus even if you go to a school where the student body is fairly conservative.”

Before the vandalism occurred, some Clemson students took to social media to express their disgust with the display.

“WHY did I just see a bunch of crosses saying ‘in honor of all the lives lost to abortion’ on campus????????” Clemson student Jessica Renee tweeted on March 14, around the time that the crosses were vandalized.

“[K]ick them and rip them out of the ground. now,” student and Chief Campus Editor of The Black Sheep Taylor Norden tweeted in response, saying, “I’m actually PISSED and I haven’t even seen them.”

“[T]hey were located on the grassy area between bracket and sikes. I would've taken them down but the people were still there putting them up when i saw it. some young americans for freedom bulls---,” Renee responded.

“The university was made aware of the damage to the YAF display shortly after it happened, and Clemson University police continue to investigate this act of vandalism, which runs counter to the university’s core values of treating each other with dignity and respect,” Denny said.