Bradley Devlin California Campus Correspondent on May 03, 2018 at 4:40 PM EDT 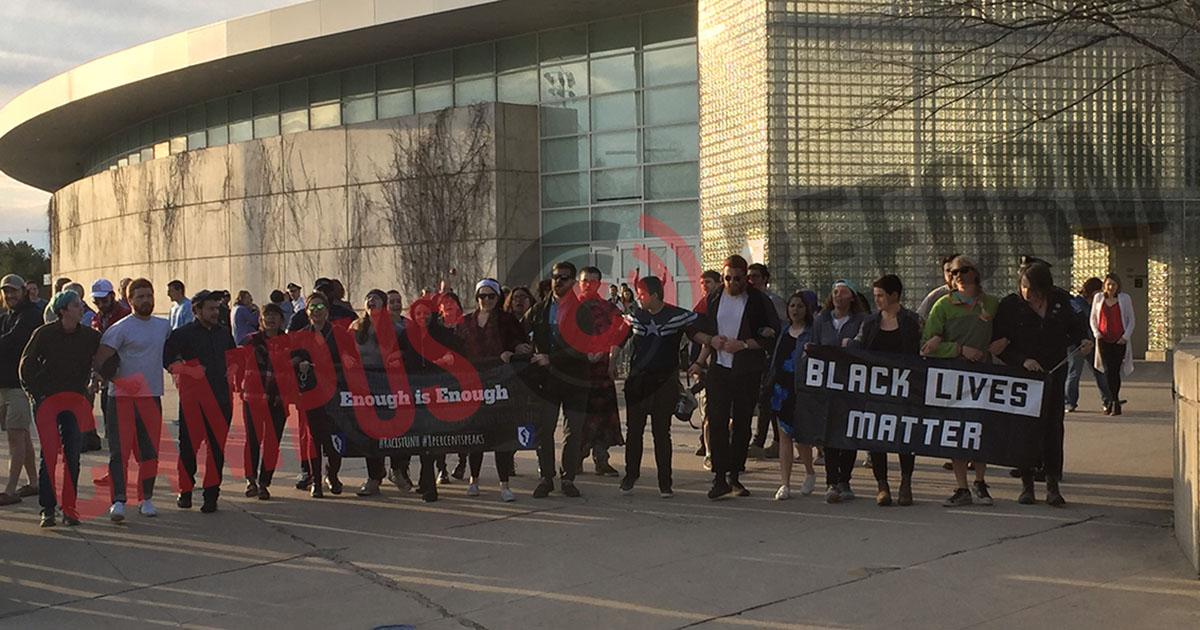 Activists at the University of New Hampshire attempted to derail a lecture by journalist Dave Rubin on Tuesday by blockading and disrupting the student-organized event.

The event was hosted by the University of New Hampshire’s Turning Point USA chapter and caused an uproar among liberal students who vowed to protest at the venue. The talk was originally slated to be a panel featuring two other Turning Point speakers, including the group’s founder Charlie Kirk, but they had to cancel their appearances due to “unforeseen travel complications.”

"Protesters formed a human chain to block entrance to the venue, forcing attendees...to scale a fence in order to exercise their right to participate in the event."

“Dave Rubin will be visiting University of New Hampshire for a special discussion panel on cultural appropriation, social justice, and free speech,” the organizers wrote in the description of the event. “This panel will focus on cultural appropriation and address the nationwide 'Cinco de Mayo' issue that transpired at the University of New Hampshire.”

Several hours prior to the event, the law enforcement officials decided to move the location of the talk to the Whittemore Center hockey rink, citing security concerns after demonstrators threatened to blockade and protest the lecture.

Moments before the event, the organizers of the lecture posted a video of the venue, claiming that hundreds of students were not being allowed to enter the building.

“[We are] here at the Whittemore center where they have capped our seating at 160 people and are not letting in the 200 people waiting outside to be let [in],” the organizers wrote. “UNH Police are currently not letting anymore students or community members inside of the arena that has a capacity of 7000 people.”

On Wednesday, the TPUSA chapter penned a letter to UNH President Mark Huddleston, detailing their grievances with how the administration handled Rubin’s lecture.

“Far from attempting to provoke outrage or create disruption, our objective in facilitating this event was to begin a respectful conversation on campus about whether ‘cultural appropriation,’ or any other speech that the university community may find reprehensible, is, nevertheless, worthy of protection,” the students explained.

“Yet, despite our best efforts, our collective attempt to initiate this dialogue was frustrated by several dozen of our fellow students, protesters not attempting to engage us with their own ideas but to use the heckler’s veto to silence any speech that they found upsetting, unpopular, or difficult to understand,” they added.

According to the letter, “student protesters formed a human chain to block [the] entrance to the venue” before the start of the lecture, “forcing attendees, including several individuals who were elderly or physically disabled, to scale a fence in order to exercise their right to participate in the event.”

The students also claimed that multiple protesters successfully entered the building and proceeded to intimidate members of the audience by shouting down the speaker.

“We are sad to report that not one member of the UNH Police Department, nor any of the several administrators in attendance, took any action either to attempt to disperse the human chain blocking the entrance to the event or to remove the protesters inside who were harassing attendees and attempting to disrupt the speaker,” the group noted.

“When we inquired with Chief of Police Paul Dean about the possibility of allowing all students waiting outside to enter, he chastised us for being ‘disorganized,’” the statement added. “One presumes, however, that he knew that it was his department that had directed a venue change shortly before the event began.”

The students concluded by offering Huddleston an opportunity to “provide us with some justification of the Administration’s actions at our event,” telling him that they are also “interested in your thoughts about the future of free speech on campus.”

UPDATE: A UNH spokesperson told Campus Reform that the school is investigating the incident, but has not yet determined whether any students violated the code of conduct.

"Administrators will review information available from the student organization and other sources to determine whether or not any students attending the event violated provisions of the student code of conduct. They will do so with the legal rights of all students and the educational mission of the university firmly in mind,” the university explained.

"The university worked with police and students on both sides to ensure the event could safely proceed and we were pleased that it did," the spokesperson added. "We are committed to balancing the need to protect free speech while protecting the health and safety of every member of our community.”

Bradley Devlin is a California Campus Correspondent, and reports liberal bias and abuse on campus for Campus Reform. He studies Political Economy at the University of California, Berkeley, where he serves as the External Vice President of Berkeley College Republicans.