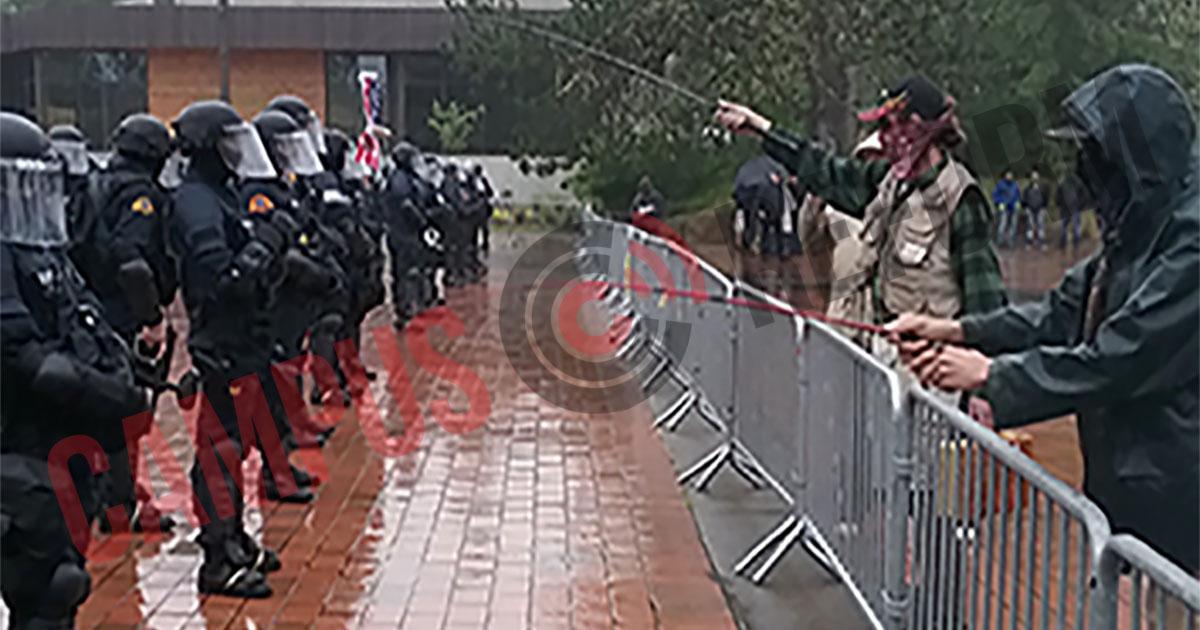 Evergreen State College released a 38-page “Independent” report on the protests and riots of last spring that is far from “independent,” claims a former administrator at the college.

Last spring, Evergreen State was engulfed in riots after a Bret Weinstein, a former professor, sent an email questioning the school’s “day of absence,” which called for white students to leave campus for a day of diversity workshops while students of color stayed on campus to participate in a different form of diversity programming.

"If Evergreen’s looming financial crisis becomes fatal, we now have a historical document placing blame not on Bridges, but on [Weinstein]."

After accosting Weinstein in class and verbally berating him to the point that the campus police chief suggested he leave campus for his own safety, the student protesters then held several high-ranking administrators hostage until they agreed to comply with a list of demands.

The report was commissioned to review the situation and provide feedback on how the college could prevent and control a recurrence of similar disruptions.

President George Bridges nominated people to conduct the “Independent” review, which was then followed by vetting and approval of the nominees by the Board of Trustees.

Multiple faculty members and a former high-ranking administrator, however, claim that the report is far from “Independent.”

In particular, the fact that Bridges allegedly “handpicked” members of the “Independent External Review Panel” made some faculty question the validity of the report.

Michael Zimmerman, former Provost and VP of Academic Affairs at Evergreen State, told Campus Reform that because members of the panel were handpicked by Bridges, the report could not be considered “Independent” in any way.

In addition, Zimmerman claimed that Bridges and his Chief of Staff, John Carmichael, saw a “draft report” of the panel’s findings before the final draft was released.

Further, the panel conducting the report interviewed 15 people, 12 of whom were faculty, staff, or administrators at Evergreen State. All three of the students who were interviewed, meanwhile, expressed a positive view of the protests last spring, and none had a neutral or negative perception.

As Zimmerman pointed out, the former chief of campus police, Stacy Brown, was not interviewed, nor was Bret Weinstein.

Peter Dorman, an economics professor at Evergreen State College, concurs that the panel should have interviewed people from all sides of the controversy.

Dorman also believes that it would be mistaken to think that the college blew up over a “radical social justice agenda,” asserting that the demonstrations and official Equity Plan that the campus supported “were long on attitude and rhetoric but limited in actual demands for institutional change, even though there are obvious (from my point of view) equity gaps that ought to be addressed.”

Naima Lowe—the Evergreen State professor who berated white colleagues on campus, declaring that “You are now those motherf***ers that we’re pushing against”—was also not interviewed for the report, and was only mentioned once.

While the report does not mention Bret Weinstein by name, it does place much of the blame on him, referring to a “faculty member” who conducted interviews with national media outlets, including Fox News, “that were used to make a political point, magnify the events’ significance, and ended up drawing to campus radical groups from the left and right, intent on causing further disruption and attracting more media attention to the Evergreen events.”

Perhaps the most egregious error in the report, according to Zimmerman, is when the panel deliberately lied about campus events, even commending the administration for avoiding “physical injury and damage to property.” In fact, there was at least one physical assault, which student protesters prevented campus police from investigating, and damage to property in excess of $10,000.

“We are also impressed that in the handling of the events in real time—while controversial for many—the administration kept its cool and managed the situation (sometimes despite withering criticism) in a way that avoided physical injury and damage to property,” the panel stated in the report. “We commend all of these actions, and noted from our interviews that additional initiatives are under consideration as well.”

Zimmerman told Campus Reform that he lost all faith in the integrity of the panel after reading that statement.

“Although I had very little belief in the integrity of the panel or the panel’s work, when I came to that, I realized that I had nonetheless given them too much credit,” he remarked, adding that the panel’s conclusion was “unbelievable” because Evergreen State’s own police reached the exact opposite conclusion.

Dorman, for his part, said the report solidified “the standard narrative about a campus gone wild with violent ultra-leftism,” explaining that “by avoiding all the uncomfortable questions, it leaves their answers to right wing ideologues.”

“Since there were no organizations or elected leadership behind the demonstrations,” he added, it is also worth asking, “how well did the demonstrators represent students concerned with social justice at Evergreen?”

Dorman said he doesn’t know why the administration wasn’t willing to condemn some of the more abusive behavior by protesters, pointing out that this caused great harm to the college and suggesting that students should seek about more effective approaches when they want to bring about change.

“This is the aspect of the events that caused the greatest harm to the college, so it should have been explored in detail. My view is that students normally go through a learning process in many aspects of their life, including activism,” he explained. “I would like students to be more effective in promoting change than what we saw last spring, but I am willing to cut them a lot of slack.”

Another Evergreen State professor, Mike Paros, even compared the report to an “April Fools” joke of some sort.

“Somehow I must have missed the customary ‘April Fools!’ proclamation that normally follows these types of hoaxes, fake stories, and practical jokes,” Paros remarks in an op-ed provided to Campus Reform, asserting that faculty and staff members are scared to speak out because they fear losing their jobs if they do.

“Faculty and staff are also embarrassed but remain silent out of fear of losing their jobs,” he writes, saying school employees are well aware “that the college President himself will ultimately decide how to implement the twelve percent budget cuts needed to make up for plummeting enrollment.”

Paros notes that Evergreen professors enjoy being granted “unprecedented autonomy to create curriculum,” and that they “resist recommendations for more ‘student-centered’ courses,” as suggested in the report.

However, the professor stresses that most of the students he teaches “don’t want to be shielded from ideas and content they find discomforting and challenging,” saying they “resent being stereotyped as intellectually and emotionally fragile due to their skin color, gender, sexual orientation, socioeconomic class, veteran status, and age,” and that “Many feel humiliated by the vulgar behavior of fellow students and the administration’s cowardly reaction.”

Zimmerman agreed that the report shows that Evergreen State is playing the “blame-game” in order to minimize damage to the college, trying to blame Weinstein for most of their falls.

“What they’re trying to do is blame Bret for inciting most of this, by being a racist, and then going public,” said Zimmerman. “[Weinstein] is not a racist. He is no more racist than anyone else on the campus.”

“If Evergreen’s looming financial crisis becomes fatal, we now have a historical document placing blame not on Bridges, but on [Weinstein],” Paros states in an unpublished local newspaper op-ed. “Nor do I support the panel and Bridge’s prejudicial and paternalistic view that the current Evergreen student can no longer handle innovative, interdisciplinary, and thought provoking courses simply on the basis of belonging to a particular category of people.”

Evergreen State College did not respond to a request for comment from Campus Reform.