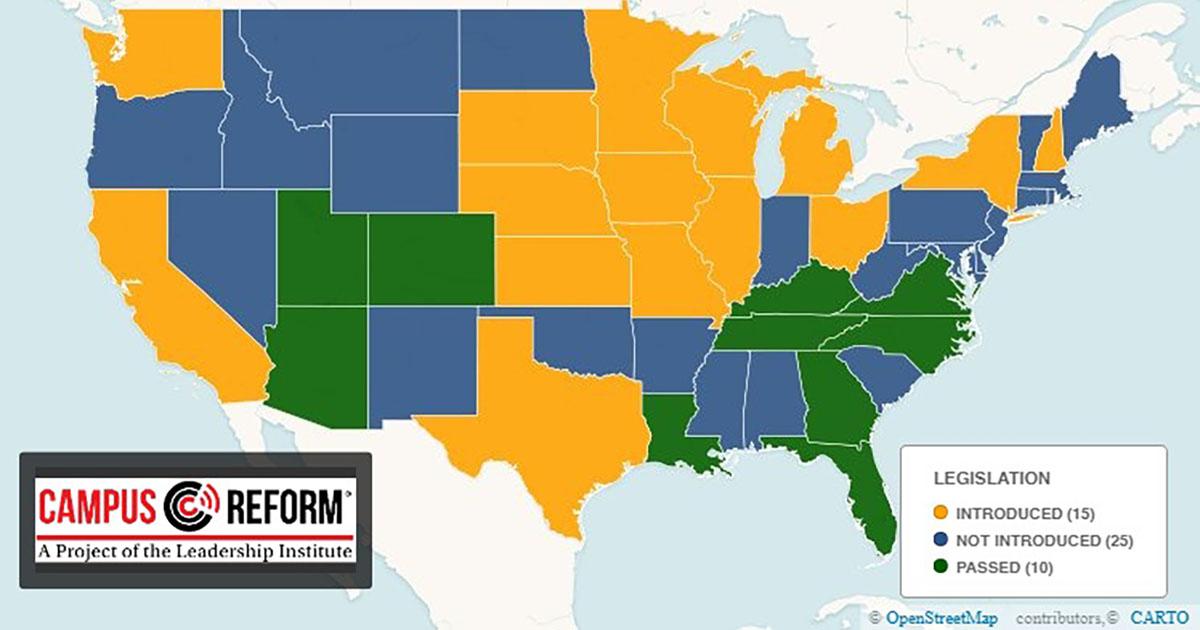 Half of all U.S. states have now either passed or introduced legislation to defend the First Amendment on college campuses.

The law further requires those policies to “be made public in the institution's handbook, on its website, and through student orientation programs,” “be incorporated in the materials, programs, and procedures provided to all employees and students,” and “provide information regarding the procedures whereby a person aggrieved by a violation of...the institution's policies on free expression may seek relief.”

Notably, the new legislation mandates that the policies on free expression must contain at least seven provisions, including “a statement that it is not the proper role of an institution to shield individuals from speech protected by the First Amendment of the Constitution...including without limitation ideas and opinions they find unwelcome, disagreeable, or even deeply offensive.”

In total, half of all U.S. states have now either passed or introduced similar bills to defend the First Amendment in higher education.

Despite signing the latest free speech bill, Louisiana’s Democratic governor had vetoed similar legislation almost exactly a year earlier, remarking that the bill "is a solution in search of a problem.”

When asked to explain why the governor decided to approve the second bill, Edwards’ spokesperson told The Advocate that "these are two very different bills that seek very different outcomes,” asserting that the first measure “was unnecessary and created an overly burdensome structure for the evaluation of the freedom of speech on college campuses.”

The governor was critical of a provision of the previous free speech bill that would have required a 15-member panel to regulate and supervise its guidelines, as well as a provision that “would have placed sanctions on students who interfered with other students expressing their constitutional right,” the spokesperson added.

Unlike last year’s bill, which was sponsored by House Republican Caucus Chairman Lance Harris, the recent legislation was spearheaded by GOP State Senator Rick Ward III and does not appear to have a mandate for an oversight committee. The Advocate notes that Harris was a political opponent of the governor, specifically regarding the state’s $648 million shortfall.

Ward, meanwhile, told the publication that he had voted for Harris’ legislation, and did not seek to draft a bill that was substantially different from the one introduced by his House colleague.