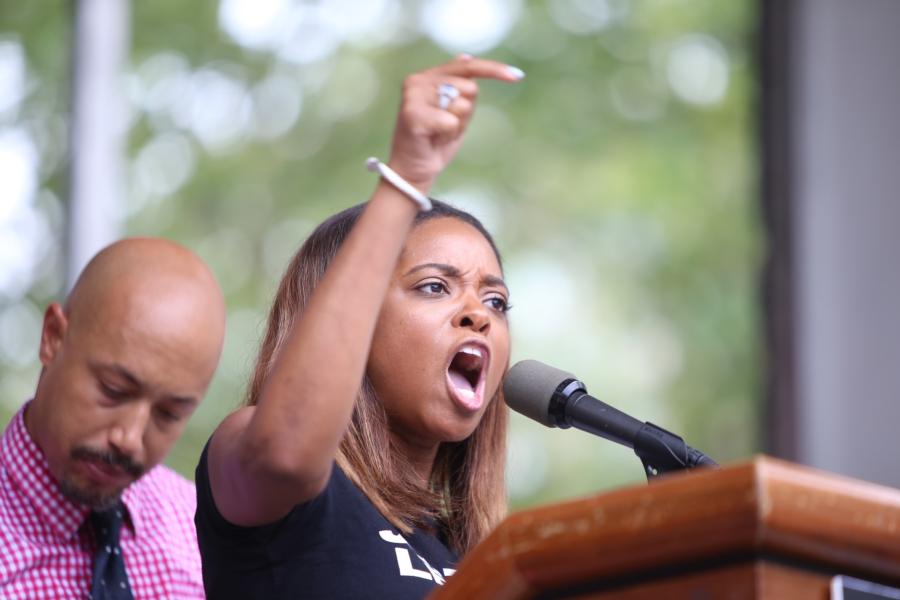 The University of North Carolina-Asheville is defending a decision to host Women’s March co-president Tamika Mallory for a lecture, despite concerns of alleged anti-Semitism on her part.

Mallory will be giving the keynote address during UNC-Asheville’s Martin Luther King, Jr. Week and will be allocated an hour-and-a-half to speak.

"the university’s invitation to an individual speaker at a university event in no way implies endorsement..."

On one occasion, Mallory called black nationalist minister Louis Farrakhan “the GOAT,” or “greatest of all time” in a social media post, according to the New York Times. Farrakhan is the leader of the Nation of Islam. He has called Adolf Hitler a “very great man” and compared Jewish people to “termites” on Twitter.

Mallory has worked with Farrakhan’s group, the Nation of Islam, but said she does not agree with “everything” the minister said regarding Jewish people.

After concerns were presented to the university regarding Mallory’s troubling history with anti-Semitism, UNC-Asheville issued a “reminder” stating that the university is committed to free speech and open dialogue.

But the school clarified that its decision to host Mallory for the keynote address did not represent an endorsement of the Women’s March co-president’s views.

“The Constitutional and democratic principles of freedom of thought and expression are central to our mission as a university, especially during the day honoring the legacy and enduring values of Dr. Martin Luther King Jr. As has been our custom, the university’s invitation to an individual speaker at a university event in no way implies endorsement of that speaker’s comments, critiques, views, ideas, or actions,” the university said. “Further, the university’s fundamental principles reject bias in all of its forms including anti-Semitism and discrimination.”

The university added that there will be opportunities for the campus community to “engage in dialogue around the keynote address” and reiterated that the university is committed to free inquiry.

Freeman Slaughter, vice president of UNC-Asheville College Republicans chapter, told Campus Reform that he believes the university is being hypocritical in inviting Mallory to be the keynote speaker.

“The Dean of Students, Jackie McHargue, stated in her commencement speech that ‘hate speech is not free speech,’” Slaughter said. “And I fail to see why this situation should be any different. Mallory is anti-Semitic and anti-Israel, but she’s being given a pass due to her work with the Women’s March.”

Slaughter agrees with the university that free speech is one of the most important rights but argues that does not mean that Mallory is free from the fallout of what she says and does.

“Personally, I think that UNC has made a poor political move with inviting Mallory, and urge them to reconsider,” Slaughter told Campus Reform. “What viewpoint can she offer that we could not read about in early-1900’s German literature? Imagine requesting a Neo-Nazi to speak on campus, and how much backlash that would incur? Truly, the difference is nothing more than skin-tone.”