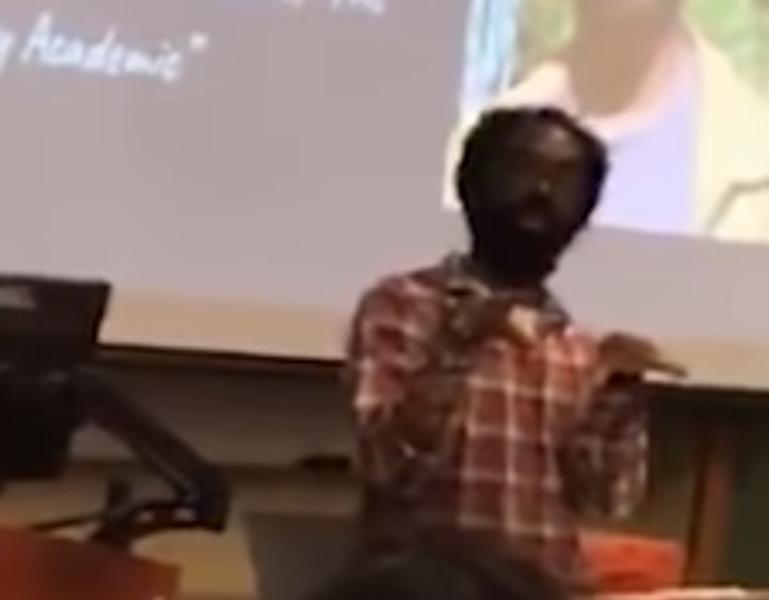 UPDATE: The University of Georgia released a statement Sunday with regard to Frimpong's comments.

"You look at white country culture like that. Everyone's got a gun and posing with it and that gun is to shoot you"
— UGA (@universityofga) January 21, 2019

The University of Georgia teaching assistant under scrutiny for racially charged comments about white people is back at it.

After Campus Reform reported Thursday on Irami Osei-Frimpong saying that “some white people may have to die for black communities to be made whole in this struggle to advance to freedom," Frimpong took to his YouTube channel on Friday. At the beginning of his 45-minute long video, he addressed how he had gotten himself into "hot water." Minutes later, he made even more racially charged comments.

Specifically, Frimpong said that white people in the country who pose with their guns on social media are "terrorists."

[RELATED: Georgia TA: 'Some white people may have to die...']

"Make no mistake. If you think I'm going on to say, 'well, just kill all white people,' no I'm not saying that. I'm saying that the person on your Facebook who has, who's posing with a gun in their profile picture, that person's a terrorist," Frimpong said. "And that works with a lot of black people. That's why we don't say anything and I will tell you a few things. I will tell you there are more white people posing with guns on their social media then there have been in every single hip-hop video in the history of hip-hop."

Frimpong's comments came just days after he tweeted that "fighting white people is a skill."

"So they say, they're like, black hip-hop culture, it's violent. No,  you look at white country culture like that. Everyone's got a gun and posing with it and that gun is to shoot you," Frimpong said, just before going on to mock white people.

"Make no mistake, if you think the ghetto youth are violent gent like Cletus and JimBob and Jackson, like no, they name their kids out of like Confederate generals,  so you have to understand that yes fighting white people is a skill and it's a skill that we don't take seriously and every single black institution in these United States is shaped by the fear of white people," Frimpong added.

A UGA Equal Opportunities Office spokesperson told former Campus Reform correspondent Andrew Lawrence that no action would be taken against Frimpong for his comments because the statements were his "personal opinion," made in his "personal capacity," on a private platform.

Campus Reform asked Frimpong for further comment on his most recent statements but did not receive a response in time for publication.

Editor's note: Campus Reform encourages civil discourse and acknowledges professors' First Amendment right to free speech. The purpose of this article, like any other, is to present the facts and allow our readers to form their own opinions.