VIDEO: Police do nothing as protester shuts down College Republicans event 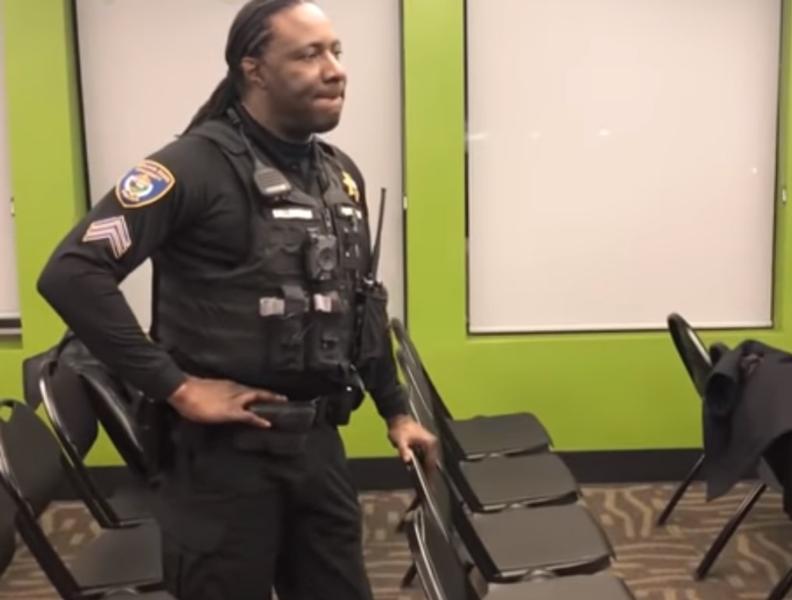 After police refused to intervene, an individual successfully shut down an event held by the Portland State chapter of College Republicans.

The group had invited conservative blogger Michael Strickland to speak Tuesday night about an incident in 2016 during which he was arrested and convicted after brandishing a gun at a mob that was targeting him.

However, Strickland’s entire speech was shut down due to the disruption of one protester. According to a report by journalist Andy Ngo, one man up-ended the entire event by following Strickland around with a bell, shouting over him when he attempted to speak, and standing in front of a projector. Police refused to intervene with the non-violent disruption.

Video shows the disrupter announcing that the last time Strickland came to campus, several transgender people were attacked by people attending his speech. When Strickland responds that he has never been to Portland State’s campus before, the disrupter shouts “Oh weird. That’s so weird. I wonder what gave me that source. Oh yeah, I just f**king made it up, ‘cause I can make sh*t up if I want.”

[RELATED: Panel on ‘civil discourse’ shut down by uncivil protesters]

Video shows police present, witnessing the entire incident, and allowing it to continue.

Strickland eventually attempts to circumvent the disruption by giving his speech directly to a live stream instead of the room, but the disrupter continues to shout over him and drown him out with a bell.

The protester "made it clear that his sole intention was to de-platform us, not to have a debate," the Portland State College Republicans told Campus Reform. "Campus security would not intervene, stating that since this was a public event, they won't end disturbances short of threats, violence, or property damage, no matter how disruptive it is. This continued for around an hour and 20 minutes, until the disrupters inexplicably left. We continued with the presentation after that point."

The College Republicans mentioned that a left-wing account called Cascadian Resistance tweeted a video of the incident.

"When an individual disrupted the event by ringing a cowbell, the officer [present] used his professional judgment and determined not to threaten or restrain the individual so as not to escalate a potentially unsafe situation," Portland State spokesman Kenny Ma told Campus Reform. "After the disruption, the meeting continued, and PSU facilities management allowed College Republicans to extend their meeting beyond the scheduled end time that night because of the disruption delay."

After initial publication of this article, PSU said in a statement via Facebook

Portland State University has guidelines for events at Smith Memorial Student Union. An event this week was sponsored by the Portland State College Republicans, a recognized student organization at PSU. Due to the nature of the event advocating gun rights, a Campus Public Safety officer monitored the event to ensure the safety of participants. When an individual disrupted the event by ringing a cowbell, the officer used his professional judgment and determined not to threaten or restrain the individual so as not to escalate a potentially unsafe situation. After the disruption, the meeting continued, and PSU facilities management allowed College Republicans to extend their meeting beyond the scheduled end time that night because of the disruption delay.

The school further linked to a document outlining the Rules of Conduct for the Smith Memorial Student Union, where the event was held.

One of those rules prohibits "exhibiting disruptive or disorderly conduct, or behavior that unreasonably disturbs patrons and staff and
interferes with use and enjoyment of the facilities including, but not limited to...Noise that is disturbing to others."

PSU commented on its own post, writing further, "Portland State University appreciates the diverse, often strong opinions expressed by our students, faculty, staff and community. A reminder that our commenting guidelines do not allow profanity, obscenities, personal attacks or threats, defamatory comments or those otherwise contrary to applicable law or PSU policy on our platforms. We encourage civil discourse. Comments that violate these guidelines or the host website's policies may be removed. PSU does not prescreen comments."