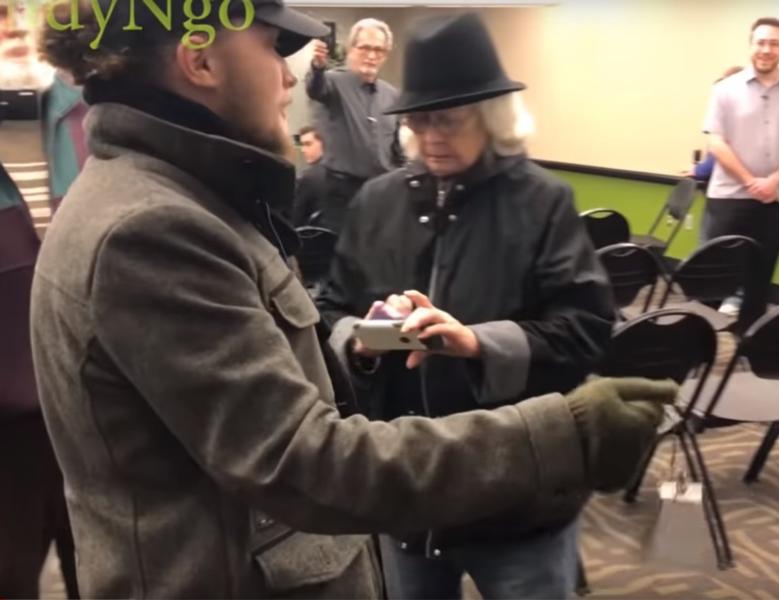 After a protester single-handedly shut down a March 5 Portland State University College Republicans speaker event, as police stood by doing nothing to intervene, the school is now doubling down in defense of the way the incident was handled.

The event was intended to be a speech by conservative blogger Michael Strickland about an incident in 2016 during which he was arrested and convicted after brandishing a gun during a Black Lives Matter protest. After PSU police stood by while a cowbell-clad protester disrupted the conservative speaker's event this month, Strickland was vocal about the fact that “campus police and security refused to intervene, despite this guy’s actions clearly meeting the statutory definition of Disorderly Conduct.”

However, the university maintains that “no crime took place” at the event, even after being presented with the Oregon State Statute defining “the crime of disorderly conduct” as committing certain acts “with intent to cause public inconvenience, annoyance or alarm, or recklessly creating a risk thereof.”

The listed acts include making “unreasonable noise” and disturbing “any lawful assembly of persons without lawful authority.”

[RELATED: VIDEO: Police do nothing as protester shuts down College Republicans event]

Portland State spokesman Chris Broderick refused to address the specific statue, telling Campus Reform, “it’s not a crime unless there are threats, assaults, destruction of property or violations of public safety."

“No crime took place at this event. No threat to persons or property occurred. It was a meeting disruption,” the PSU spokesman claimed, adding that the school made the situation right because it “extended the time of the meeting beyond its scheduled end in that campus space to accommodate the delay” caused by the “disruption.”

Although it did not address the disorderly conduct statute directly, the school rejected Strickland’s citing of the law, contending that “Strickland is not in a position to be an expert on state statutes, having been convicted of 21 felony and misdemeanor counts of threatening protesters with a gun, sentenced to jail and banned from possessing a firearm.”

“If disrupting a meeting with a cowbell is a crime, then anyone who disrupts public meetings by yelling or being an ‘annoyance’ at school boards, city councils, county commissions, legislative hearings, etc. would be guilty of a crime,” Broderick told Campus Reform. “Obviously, that happens daily in public life in Oregon. It’s not a crime unless there are threats, assaults, destruction of property or violations of public safety.”

But according to Tyson Langhofer, senior counsel and director of the Center for Academic Freedom at Alliance Defending Freedom, video of the disruption makes it “very clear that the individual committed the crime of disorderly conduct in violation of Oregon law by making unreasonable noise and disturbing a lawful assembly without lawful authority.”

[RELATED: Academic journal falls for prof’s prank...and the prof gets in trouble]

“Unfortunately, officials at Portland State University compounded this problem by refusing to enforce the law and thus allowing the protestor to engage in a heckler’s veto. Numerous courts have held that law enforcement has the duty not to ratify and effectuate a heckler’s veto nor may they join persons intent on suppressing ideas. Instead, they must take reasonable action to protect persons exercising their constitutional rights,” Lanhofer told Campus Reform. “If the University officials refused to enforce the law based on the viewpoint of the speaker’s speech, as it appears they did, then the University violated the First Amendment rights of both the speaker and the student group sponsoring the event.”

In a Monday letter to the PSU president, the Foundation for Individual Rights in Education (FIRE) tore apart the university’s public statement regarding the incident, which referred to the actions of a “Campus Public Safety officer,” rather than the police, as well as that officer’s use of “professional judgment” to decide not to intervene.

“We recognize that the First Amendment does not create an affirmative obligation on the part of law enforcement to prevent third parties from infringing the rights of others,” Steinbaugh said. “We also recognize that institutions committed to freedom of expression must anticipate and protect the rights of student and faculty members to peacefully protest disfavored speakers, whether that protest is polite and sober or vociferous and untempered.”