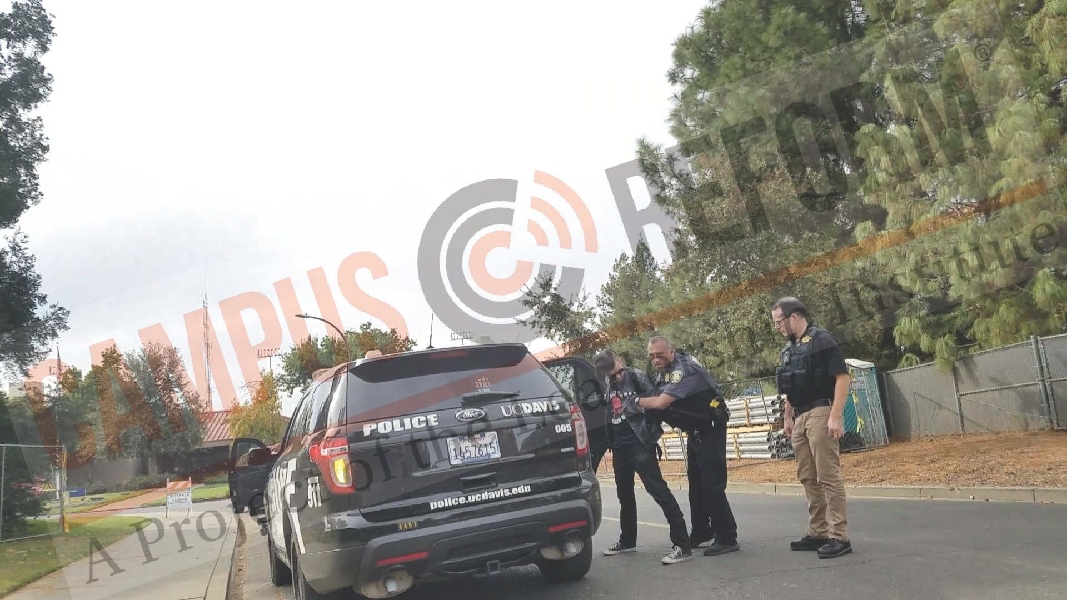 A student was arrested and charged with battery after allegedly shoving a conservative activist at the University of California-Davis.

Gabriel Nadales, who works for Campus Reform's parent organization, the Leadership Institute, was invited by the UC-Davis Turning Point USA chapter to speak at the school. Nadales was helping students table to promote the speaking engagement, which was scheduled to take place later that evening and dealt with free speech on college campuses and the use of force to stifle speech with which one disagrees.

"Then he grabs the pins and slams them on my chest"

Nadales said he had just arrived to help and sat down at the table when he saw a man and woman notice the operation and abruptly walk over to the group. Nadales says the two individuals then aggressively removed promotional items from the table and destroyed nearly all of the promotional fliers that the group was set to distribute.

"I confronted them. I said 'hey what are you doing?' I asked them to give me back all of the pins," Nadales told Campus Reform. "It wasn't like they took a flyer or just one pin. They grabbed a handful of pins and they had taken almost all of our fliers that we were supposed to pass out to people, and the girl had crumpled them up in her hand.”

Nadales can be seen on video asking the man, who has since been identified as fourth-year biotechnology student Thomas Jara, to return the items. Jara, however, repeatedly insists that the items are "free" and that he plans on wearing the buttons. Jara and the woman try to end the interaction by walking away, but Nadales follows them, demanding they return what he deems to be stolen property.

"Yeah, if you put it out for people," Jara responds.

"You stole all our posters dude, you're crumpling them up," Nadales tells them as they continue to walk away.

Nadales told Campus Reform that he stopped recording briefly to call the police to report the theft of his property. During this time, Nadales says the woman took off, but the confrontation continued between him and Jara.

"[Jara] was trying to pretend I was starting a fight with him or that I was being the aggressor," Nadales said, adding that the student caused such a large scene that a student employee tried to intervene. The employee can be seen on video trying to de-escalate the situation.

"Do I have to pay for your buttons? Yes or no?" Jara asks before returning them aggressively. "Have fun."

A thud can then be heard, which Nadales says is the result of Jara physically shoving the buttons into Nadales' chest.

"Then he grabs the pins and slams them on my chest," Nadales told Campus Reform. "At which point I'm like okay, it's no longer about the pins. Now it's about your willingness to escalate the situation into being physical."

Nadales said he continued to follow Jara, while waiting for a call back from the police, who had hung up to address a medical emergency. By the time the police called back to address Nadales’ theft report, the situation had already escalated to a physical altercation. Nadales continued to pursue Jara on foot, describing his location to police over the phone. Police eventually intercepted the foot chase.

UC-Davis Police confirmed to Campus Reform that Jara was issued a citation for battery as a result of a citizen's arrest by Nadales.

Jara can be seen in this exclusive photo being detained and put into a UC-Davis Police Car. His court date is set for Dec. 9.

"The speech was about how students seem to think that it's okay to use force to prevent people's freedom of speech, and it ended up happening," Nadales told Campus Reform. "It's ironic."

During his time at UC Davis, Jara has been active within Students for Democratic Society. In 2018, Jara spoke out in defense of a fellow UC Davis student who was arrested while protesting an appearance by conservative provocateur Milo Yiannopoulos. That student was charged with felony obstruction of an officer by use of force, felony battery of a UC Davis police officer, misdemeanor resisting arrest, and misdemeanor battery.

Jara called it "absurd" that the student was arrested, claiming that "no laws were broken."

Jara is set to speak at an event next month on "community defense and self-defense collectives," which deals with topics such as "ICE kidnapping," "toxic masculinity," and "white supremacist terrorism."  The event is a workshop demonstrating "self-defense techniques," including both "how to protect yourself online” and physically. It will also address "the definition of violence" and how to avoid "ableism" within the context of self-defense.

The first half of the workshop will focus on "de-escalation," and then Jara will move on to teaching martial arts techniques.

Davis Associate Director of News and Media Relations for STEM disciplines Andy Fell told Campus Reform that he was aware of the arrest, but that any potential disciplinary action by the school is still up in the air.

“This would first require a complaint to be filed with the Office of Student Support and Judicial Affairs,” Fell explained. “Generally speaking, when there is a criminal complaint involved, any student discipline takes place after the criminal case is resolved."

Cabot Phillips slams 'cancel culture': 'Conservative students are the ones at risk of being shut down' Shares