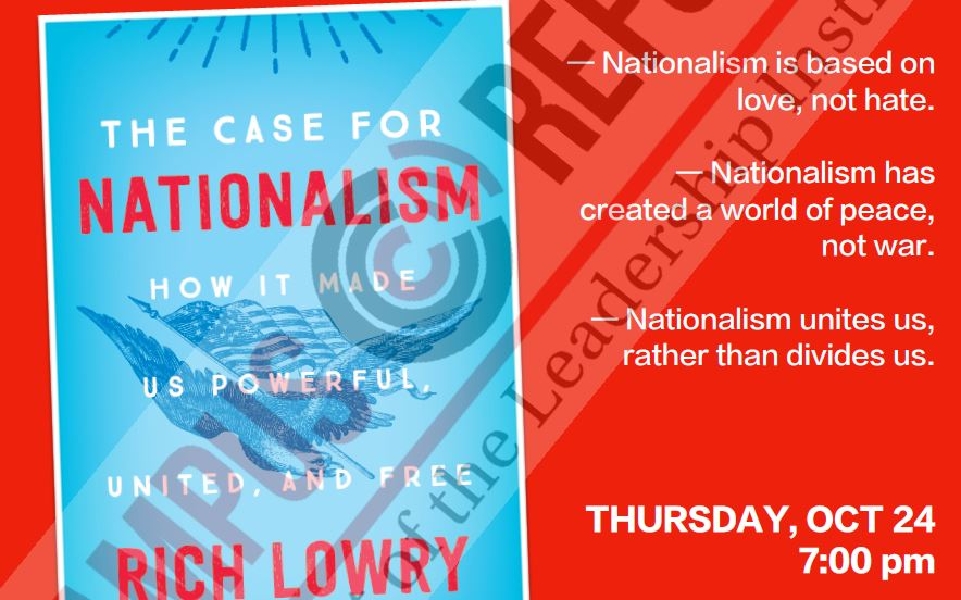 The editor-in-chief of a New York University student newspaper decided at the last minute not to publish a full-page advertisement promoting a conservative event on campus.

“The word ‘nationalism,’ as it exists in today’s political lexicon, connotes xenophobia and white supremacy"

Sakshi Venkatraman, editor-in-chief of The Washington Square News, wrote in a letter that she decided to pull the advertisement from running in print at the last minute, explaining that “the ad’s pro-nationalist message does not align with the values of our paper.”

“The word ‘nationalism,’ as it exists in today’s political lexicon, connotes xenophobia and white supremacy, and printing it in large letters on the back of our paper would have marginalized people of color on our campus and our staff,” Venkatraman contends. “I prioritized the sensibilities and trust of our audience over the ad revenue, and I stand by my decision.”

Lowry posted a response on Twitter, terming Venkatraman’s sentiment a “poisonous and lazy misunderstanding” of nationalism and positioning misunderstanding of the concept as why he wrote the book The Case for Nationalism: How It Made Us Powerful, United, and Free.

Lowry also said that “free discussion and the exchange of ideas don't marginalize people, they potentially change our minds and, at the very least, sharpen our arguments.”

According to National Review, the advertisement had been accepted by the paper’s business team and was scheduled to run on Monday, Oct. 21. Lowry learned that the advertisement would not be running but only found out because his payment was refunded.

The advertisement, obtained by Campus Reform, reads “Nationalism is a good thing,” across the top of the page, followed by a description of the event and book by Lowry.

“Rich Lowry, editor of National Review magazine and author of the new book 'The Case for Nationalism,' comes to NYU to discuss why nationalism is not the same thing as fascism, racism, or militarism. Rather, nationalism is part of the mainstream of the American tradition and has made this country great,” the advertisement reads.

The advertisement also says that “nationalism is based on love, not hate. Nationalism has created a world of peace, not war. Nationalism unites us, rather than divides us.”

Bobby Miller, vice president of the NYU College Republicans, told Campus Reform that the situation is “rich in irony.”

"The advertisement would not have 'marginalized people of color on [our] campus' in any way, as Venkatraman stated," Miller said. "In his new book, The Case for Nationalism, Lowry argues that [in] a time when we find ourselves mired in self-doubt and self-criticism, it is time to reclaim the term 'nationalism' from those who equate it with chauvinism and xenophobia to recover our lost sense of national pride, to regain our self-confidence and achieve continued greatness, and the ad reflected that."

“The beauty of American nationalism is that it is totally divorced from race and ethnicity,” he added. “In reality, nationalism and the notion of the melting pot have been central to the American project, and all people, regardless of their skin color, should embrace it.”

Miller also told Campus Reform that the decision to remove the ad is, “without a doubt,” a suppression of free speech.

“The paper prides itself on transparency and serves a platform for the contest of ideas on NYU's campus,” Miller said, noting that “in its mission statement, the paper states, ‘The editorial team has no say or sway in what advertisements run on the website or in print — and is not notified in advance of what advertisements will be running and whom they are from....The editorial team is not involved with this process in any way.’”

In Venkatraman’s letter, she admits that the call to pull the advertisement was made on her own and was done while “my colleagues on the business side of the paper were asleep.”

“WSN has the right to refuse advertisements at any time without explanation,” she wrote.

Venkatraman even appeared to joke about the situation on Twitter.

Campus Reform reached out to Sakshi Venkatraman multiple times, as well as NYU, but did not receive a response in time for publication.