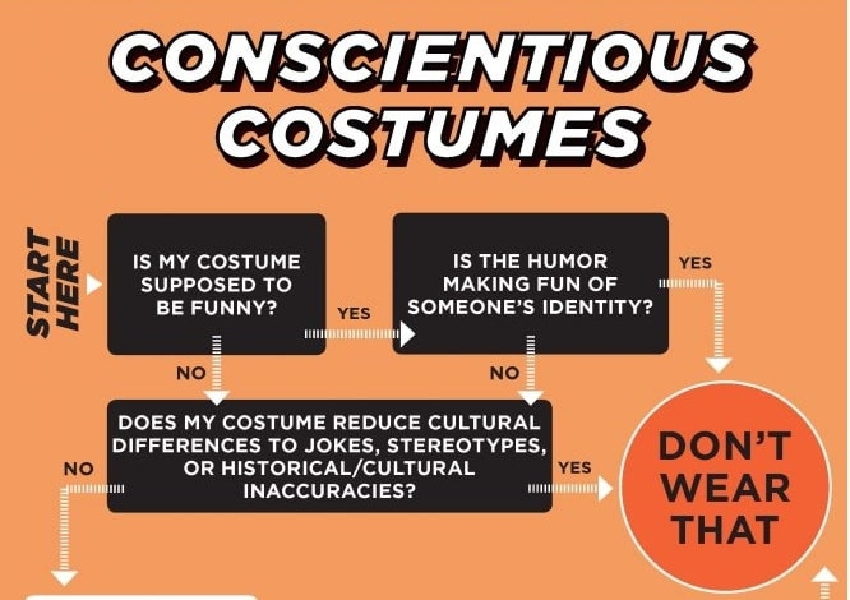 California Polytechnic State University released a guide in preparation for Halloween, advising students to remember to dress up in a “respectful manner” and ensure that every member of the community “feels safe and included.”

The university posted the guide for students choosing to dress up for Halloween to inform them which costumes are and are not considered “respectful.” The guide includes a “Conscientious Costumes” flow-chart, which guides students through the process of various considerations to take into account when choosing a Halloween costume.

“Costumes that exaggerate different body shapes and sizes for the purpose of a laugh are not ok.”

For example, if the costume packaging includes the words “traditional, cultural, ethnic, or tribal,” the graphic tells the reader “DON’T WEAR THAT." Other conditions leading to the same conclusion include the use of an afro wig and costumes that “reduce cultural differences to jokes, stereotypes, or historical/cultural inaccuracies.”

While some of the suggestions are logical means to avoid offending others, others are more unclear, like the guide’s suggestion not to wear “Fat/Body Shaming Costumes,” which can supposedly include “critiques of our own appearance,” or “Sexist Costumes” that “perpetuate stereotypes about men and women” and “position men as more dominant and successful, and women as weak and of lower status.”

“Costumes that exaggerate different body shapes and sizes for the purpose of a laugh are not ok,” the guide, which also encourages students to hold themselves and their friends “accountable” for their Halloween costumes, states.

At the end of the guide, the university encourages students to read an article on “Understanding and Avoiding Cultural Appropriation,” which lists “Buddhist tattoos” and “white gay men adopting the dialect of black women,” as examples of cultural appropriation.

Cal Poly Director of Media Relations Matt Lazier told Campus Reform that the information mentioned in the guide is not part of any official university policy, and is just a “tip sheet to help members of our campus community to be thoughtful about the potential impact of their choice of costume.”

Just last week, Cal Poly garnered criticism from the Foundation for Individual Rights in Education when the university opened an investigation into a “Cowboys and Aliens” party because of an Instagram post captioned “Cowboys vs. (Illegal) Aliens."