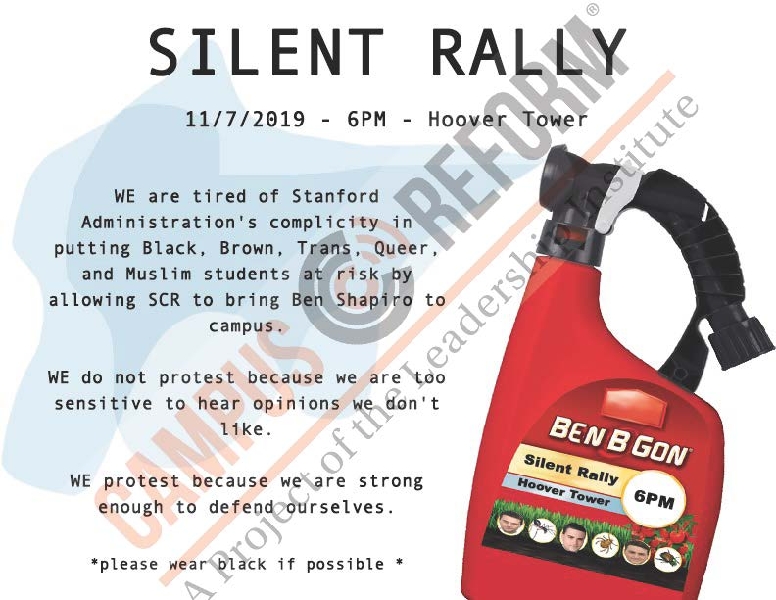 A speech by conservative author and commentator Ben Shapiro at Stanford University was met with opposition Thursday by a group's “refusal” to allow the conservative commentator to go on without consequence.

A group calling themselves the  “The Coalition of Concerned Students” penned an op-ed in The Stanford Daily lamenting “another year of white supremacy, xenophobia and bigotry on Stanford’s campus,” as evidenced by the “violence that Ben Shapiro’s hateful, dehumanizing ideas incite...” The group insisted that its protest would be a “silent protest,” but also expressed “refusal to allow Shapiro’s talk to go uninterrupted.”

“WE are tired of Stanford Administration’s complicity in putting Black, Brown, Trans, Queer, and Muslim students at risk by allowing SCR to bring Ben Shapiro to campus"

“With the signs we will hold, this op-ed, and an additional written statement, we provide language and context for our action. At the same time, our action does not need words. We place our bodies directly against this harmful event and these harmful people,” the group wrote.

The group advertised its protest with a flier that included an image of an insecticide bottle with Shapiro’s picture and the phrase “Ben B Gon."

“WE are tired of Stanford Administration’s complicity in putting Black, Brown, Trans, Queer, and Muslim students at risk by allowing SCR [Stanford College Republicans] to bring Ben Shapiro to campus,” the flyer reads.

The editorial board of The Stanford Review called on the group to cease the use of the image, and “apologize for their insensitivity,” claiming that the framing of Shapiro as an insect to be exterminated was potentially “a play on anti-Semitic tropes about extermination.”

“While defending their preferred minorities, the coalition has dehumanized Mr. Shapiro, a devout and outspoken Jew,” the Review claimed.

According to Young America's Foundation, the group did send an email apologizing for the flyer.

During his speech Thursday, Shapiro was interrupted by protesters in the audience who stood up and started chanting “Hey hey! Ho ho! Ben Shapiro has got to go!” Shapiro acknowledged the disruption and asked protesters, "are you protesting the part where I'm condemning the nazis?"

"I'm literally condemning nazis and you're telling me to leave," Shapiro added in a video posted by Shapiro's media outlet, The Daily Wire.