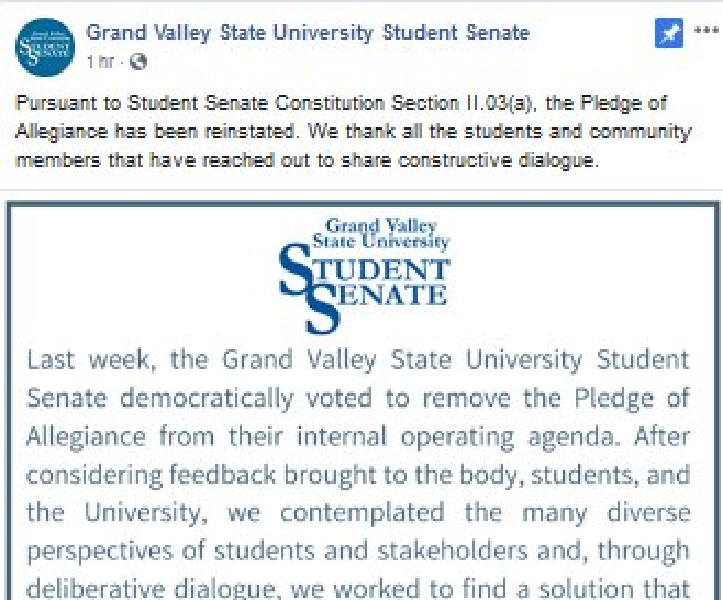 After backlash from students and community members, the student government at one Michigan university is walking back its decision to ban the Pledge of Allegiance at meetings.

Just days after making headlines for voting to remove the Pledge of Allegiance from its meetings, the student government at Grand Valley State University is reversing its decision in light of "diverse perspectives."

Just days after making headlines for voting to remove the Pledge of Allegiance from its meetings, the student government at Grand Valley State University is reversing its decision in light of "diverse perspectives."

At a Thursday night meeting, the GVSU Student Senate voted to remove the Pledge from all of its meetings. Students supporting the change claimed that the Pledge of Allegiance was not inclusive and did not promote equality.

"It’s important when we’re talking equity and equality and social justice that we are having those kinds of measures taken," said Student Senator Lansing Sánchez-Castillo, adding that the language in the pledge "doesn't sit with this diverse population and fully representing them."

But less than a week later, the organization reversed the decision. In a Tuesday morning statement, the GVSU Student Senate announced that the Pledge of Allegiance "has been reinstated," citing feedback from "students and stakeholders."

"We thank all the students and community members that have reached out to share constructive dialogue," the student senate said, before explaining that it  had"contemplated the many diverse perspectives of students and stakeholders and, thorough deliberative dialogue, we worked to find a solution that we believe will meet the needs of all students."

The student government closed its statement by reassuring the community that "The Pledge of Allegiance will be included regularly on each Student Senate agenda," and that each student will have "the opportunity to stand or not stand."