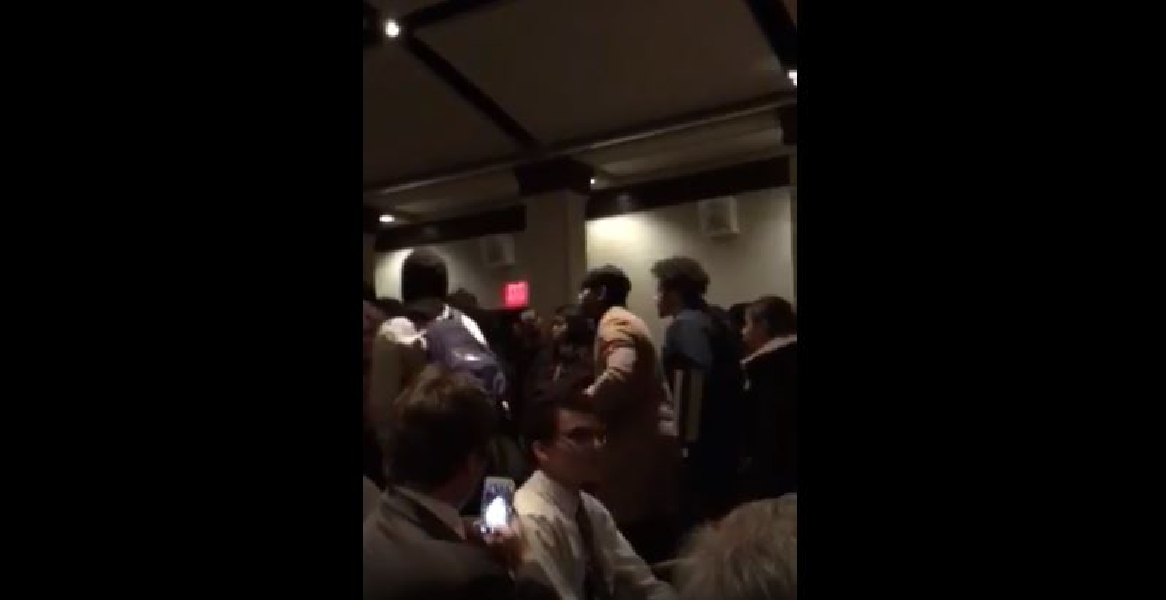 Protesters disrupted a lecture by conservative commentator Heather Mac Donald at a Massachusetts Jesuit college, shouting phrases like “my oppression is not a delusion” and “your sexism is not welcome.”

The Fenwick Review, the independent student newspaper of The College of the Holy Cross in Worcester, Mass., hosted Mac Donald on Nov. 18 to discuss her new book “The Diversity Delusion.”

“My oppression is not a delusion."

Video and audio obtained by Campus Reform, captures protesters trying to shout down Mac Donald while she is speaking, but according to a spokesperson from The Fenwick Review, the event was not canceled and Mac Donald carried on.

Mac Donald attempted to address the protesters but was again drowned out by the same chants.

“It is a sad admission that, again, of impotence, that we do not believe in the power of language and discourse,” Mac Donald said. “It’s a shame, I would have really enjoyed the opportunity to hear about the oppression at Holy Cross, and to be able to debate whether the perception of oppression is valid or not.”

Following the disruption, some students walked out of the event.

Holy Cross Media Relations Director John Hill told Campus Reform that there were no arrests made and that no one was removed from the event.

“A recognized student group invited Heather MacDonald to speak on campus Monday. About 15 minutes into her talk, a group of students engaged in a walkout,” Hill said. “After the handful of minutes it took the students to file out, Ms. MacDonald finished the rest of her talk and a question and answer session uneventfully.”

Hill did not respond to questions regarding whether or not the students had committed any college policy violations during their disruption.

Co-editor-in-chief for The Fenwick Review Seamus Brennan told Campus Reform that the group is disappointed that the event was disrupted, but are optimistic that this event can be used for learning purposes.

“Though The Fenwick Review was disappointed by the disruptions caused during Ms. Mac Donald’s lecture on Monday – especially given that they were staged in the name of tolerance and diversity, yet demonstrated a blatant intolerance for difference of opinion and diversity of thought – it is our sincere hope that we can use the occasion for continued dialogue and understanding in the wake of heightened emotions and polarization on campus,” he said.

In an op-ed published in student newspaper The Spire, student Johanna Mackin said she attended the lecture in protest and accused Mac Donald of attempting to “humiliate” minority students.

“Moreover, she did not come with the intention of starting any open dialogue from which anyone could benefit. Ms. Mac Donald made her purpose known when she began her speech with immediate attempts to discredit, humiliate, and deny the existence of minority students,” Mackin added.