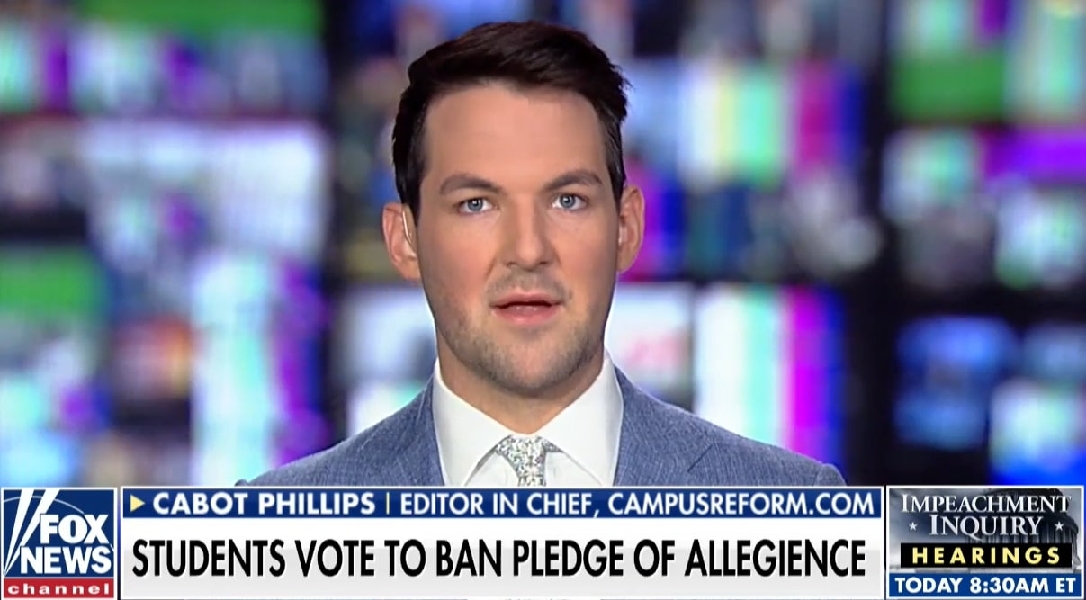 Campus Reform Editor-In-Chief Cabot Phillips sounded off in a recent FoxNews.com op-ed over the growing opposition on college campuses to reciting the Pledge of Allegiance. The most recent example, as Campus Reform reported in November, happened at Grand Valley State University in Michigan, where the student government voted to ban the pledge, only to reinstate it days later due to backlash.

At least one of the supporters of the Pledge of Allegiance ban said one of the reasons they favored doing away with it had to do with the "oppressive" federal government. However, as Campus Reform's Phillips has pointed out in television interviews and, now, in his most recent op-ed, it's "ironic" for anyone to claim that they live under an "oppressive" government while simultaneously speaking out against it.

"Soon the idea of being proud of such a country, let alone pledging allegiance to it, becomes unconscionable"

"The same students accusing others of being blinded by privilege fail to observe the glaringly obvious privilege they themselves enjoy: American Privilege. That is, the unique privilege of living in a country that actively protects the rights of its people to criticize their government without fear of repercussions," Phillips wrote.

"The growing idea that America is a land of oppression rather than freedom is the symptom of a culture that incentivizes victimhood by bowing down to anyone claiming to be disadvantaged...That victim status offers immunity from foes, praise from peers, and garners special treatment from those in authority, namely school administrators. Oppression is the currency in today’s social economy, and business is booming," Phillips continued.

"The ultimate praise on campus is reserved for those who can claim oppression while simultaneously combating it themselves. The role of 'social justice warrior' is now a tantalizing one for a young student looking to fit in," Phillips added. "The only thing missing is often the social injustice itself. Thankfully for these self-identified warriors, the actual presence of oppression and injustice isn’t necessary to receive validation — all that’s needed is the claim that it exists."

In a previous television interview, Phillips pointed out, "no one is saying that you should be forced to say the pledge," adding that "mandatory patriotism is not something that's patriotic at all, but you should be able to take at least a few seconds out of the day to look back and to realize just how special our country is."

"Every superhero needs a villain, and upon hearing each day in class that the United States is a genocidal country with a predominant legacy of racism and bigotry, it’s easy for these young, passionate minds to settle on America itself as their foe of choice," Phillips wrote in his op-ed.

"Soon the idea of being proud of such a country, let alone pledging allegiance to it, becomes unconscionable," he added.