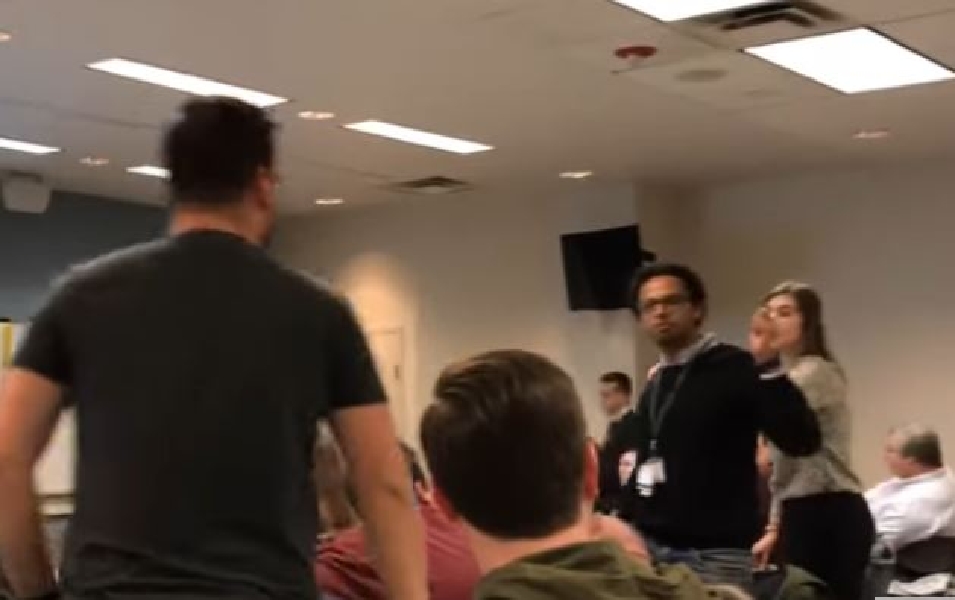 The Federalist Society chapter at George Mason University's Antonin Scalia Law School in Virginia hosted Nigel Farage Thursday, but the Brexit leader's speech was disrupted by a heckler who was then escorted out of the room.

Campus Reform obtained exclusive video footage of the disruption, which lasted about one minute.

"You're grown up. Why don't you listen and ask questions?"

In the video, the disruptive protester stands and holds up his laptop, but what exactly he said is unclear.

"You're grown up. Why don't you listen and ask questions?" Farage tells the protester.

The unidentified heckler then says "I will leave" as student Sean MacDonald approaches him.

"I'm a larger guy, and as someone who's pretty involved in FedSoc and in setting up the event I took it upon myself to escort the protester out of the room," MacDonald told Campus Reform. "Once I walked up, he quickly grabbed his things, but continued to scream and shout the entire time I was escorting him out."

[RELATED: VIDEO: Sheriff Joe Arpaio event 'disrupted' by 'Antifa,' 'one of whom drew a knife']

"It's too bad he decided to conduct himself that way, he may have had the opportunity to ask a question at the end that challenged Mr. Farage's record on whatever issue about which he was upset," MacDonald added.

MacDonald said the protester is not a law student.

Campus Reform reached out to GMU for comment and to ask if the protester is a student but did not receive a response in time for publication.

Federalist Society member Jameson Broggi also reacted to the disruption in a statement to Campus Reform.

"Mr. Farage was willing to let the heckler ask questions during the Q&A. But the heckler had no interest in civilized conversation and only wanted to engage in a rude diatribe talking over Mr. Farage," Broggi said.

MacDonald echoed Broggi, saying that, "Federalist Society events are an opportunity to hear points of view with which one may or may not agree. Mr. Farage is not the first 'controversial' speaker who has come to our school, nor will he be the last."

Farage commented as the protester left the room, "three and a half years of these people in Britain and in America."

"These people are so driven mad that they actually think they are morally superior to those that have a different point of view," Farage added.

Farage, the leader of Britain's Brexit Party, made his appearance at GMU just days after Britain formally withdrew from the European Union.