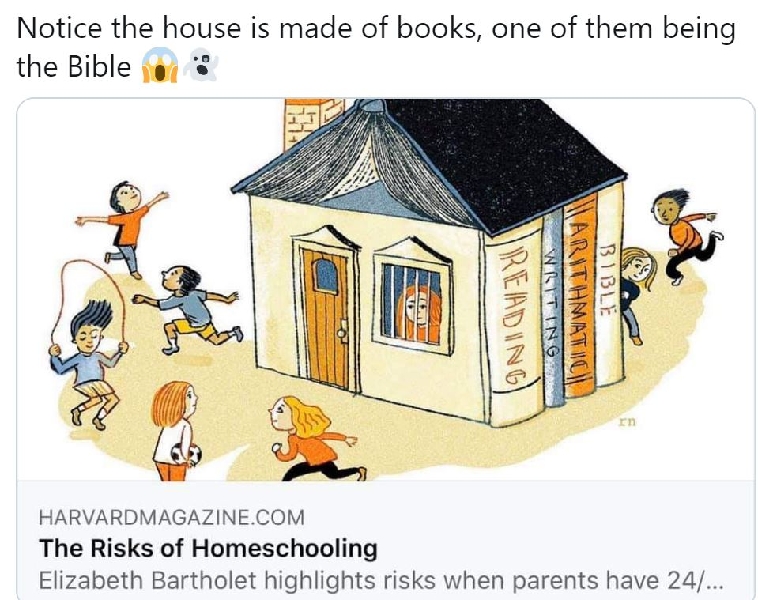 "full of fear-mongering and propaganda against homeschooling"

The event, as well as the hosts, have come under fire, most notably on Twitter by the Reason Foundation's Director of School Choice Corey A. DeAngelis, as “an unfounded attack on homeschooling” and “beyond parody”. Others, such as Ethics and Public Policy Center Visiting Fellow Alexandria DeSanctis and the Young American’s Foundation also tweeted criticism.

This is evil and antithetical to freedom. There are few things more terrifying than a society full of people who would rather see children indoctrinated by the government than educated by their own parents. https://t.co/AeSRkLlwwb

God forbid some parents would prefer to educate their children themselves instead of the government doing it for them.

Children are not the property of the state, they are the responsibility of parents. https://t.co/l19Awxza8a

As Campus Reform previously reported, summit co-host Harvard Law Professor Elizabeth Bartholet expressed in "The Risks of Homeschooling" that homeschooling should be “banned presumptively," which DeAngelis told Campus Reform was “just full of fear-mongering and propaganda against homeschooling” and “didn’t draw a lot of research or scientific evidence or data points or statistics.”

Bartholet told Harvard Magazine that homeschooling violates children's rights to a “meaningful education," exposes them to a greater risk of child abuse and may even limit them in how they are able to contribute positively to society. College of William and Mary Professor James Dwyer also appears to carry a negative view on homeschooling. DeAngelis dug up video he later tweeted out showing Dwyer appearing to say that "the reason parent-child relationships exist is because the state confers legal parenthood."

He claims "The reason parent-child relationships exist is because the State confers legal parenthood." pic.twitter.com/ZdeztqCxWl

Now, a student group at Harvard's business school called Ideological Diversity is set to host a counter-event, “The Disinformation Campaign Against Homeschooling” on May 1  to “address hostility in academia and the media towards children learning outside of the schoolhouse.” President of the Ideological Diversity Club Cevin Soling is the host and fellow panelist. Soling is a Harvard Kennedy School Freedman Martins fellow and Harvard Graduate School of Education student.

Soling told Campus Reform “When I heard about Elizabeth Bartholet’s summit I was very disturbed by the comments she made that were published in an article in The Harvard Magazine. They were just rife with just gross inaccuracies about homeschooling and she was calling for policy change which made it more problematic. It’s one thing to have bad information and to spread it is another thing and to recommend and to be in a position which one can call for policy change. She wants regulation and possibly the banning of the practice. Her rationales are very poor. I decided I was going to form the student organization and host the conference.”

“We each have different things to bring to the table as far as our analysis of the summit and of the movement itself. The problem is more than just the summit, it's in the media as well with the difficulty with what they perceive to be homeschooling," Soling said.

While Harvard Law’s Summit is invite-only in June, Soling’s event will be virtual and open to the public on May 1.

“It’s ineffective in education or at least very bad at it. It causes grief and psychological harm...Public schools are compulsory. Compulsory means people are forced to attend," he said.

Campus Reform reached out to fellow panelist Corey DeAngelis, who pointed out the private invite status of Harvard Law School versus the public conference he is co-hosting “shows a lot in of itself”. DeAngelis plans to speak about “the risk of government schooling” and “compare homeschooling to a realistic counterfactual, which is not perfection, its the government school systems.”

“Our event is public and virtual. We’re not trying to block out people who disagree with us to listen to our viewpoints. That is not the case with the Harvard law school conference that is an anti- homeschooling conference. They made it invite-only and it’s private. I don’t know if any of my colleagues who support homeschooling have been invited to the Harvard Law School event. It seems they are shutting out people who disagree with them. That shows a lot in and of itself. I believe that our event is public and theirs is almost completely closed off to the public and is private. We want to show the other side of the story.”

“We’re going to focus and compare differences and outcomes for both sectors. We’re not going to pretend the other sector doesn’t exist, that’s unscientific to pretend the counterfactual is perfection. We don’t live in a fairytale system of perfection. We have to weigh trade-offs between different systems and it shows our conference is going to be more intellectually honest and more intellectually rigorous.”