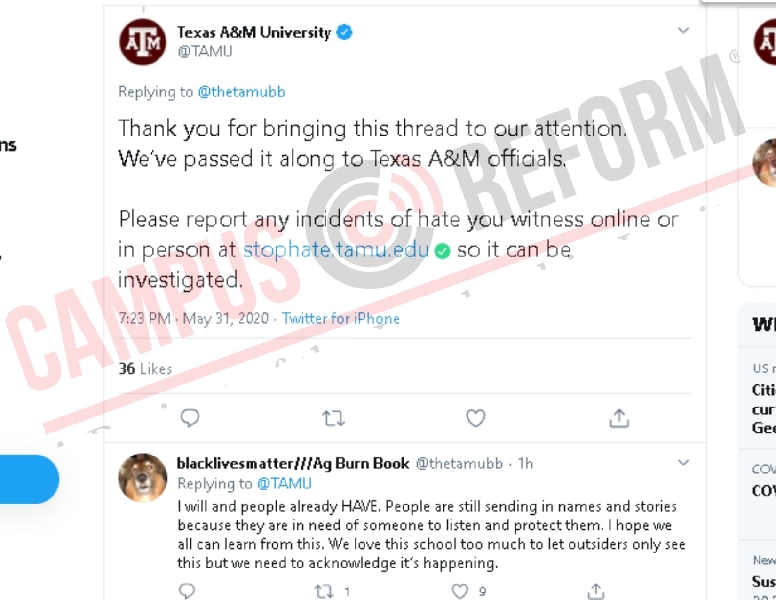 Texas A&M University publicly collaborated with an anonymous Twitter account creating a “burn book” of conservative students at the university.

Conservative Texas A&M students were recently targeted by a since-deleted Twitter account attempting to notify the university of all "hateful" students on campus. The university responded on Twitter by stating that it would contact Texas A&M officials and issuing a reminder to report any “incidents of hate” to be investigated.

"Thank you for bringing this thread to our attention. We've passed it along to Texas A&M officials."

Before starting the Twitter thread, the account remarked on how freedom of speech is “a bitch when it’s against you." The Twitter account released students' names, identifying pictures, and an explanation or retweet about why each individual is deserving of scorn. 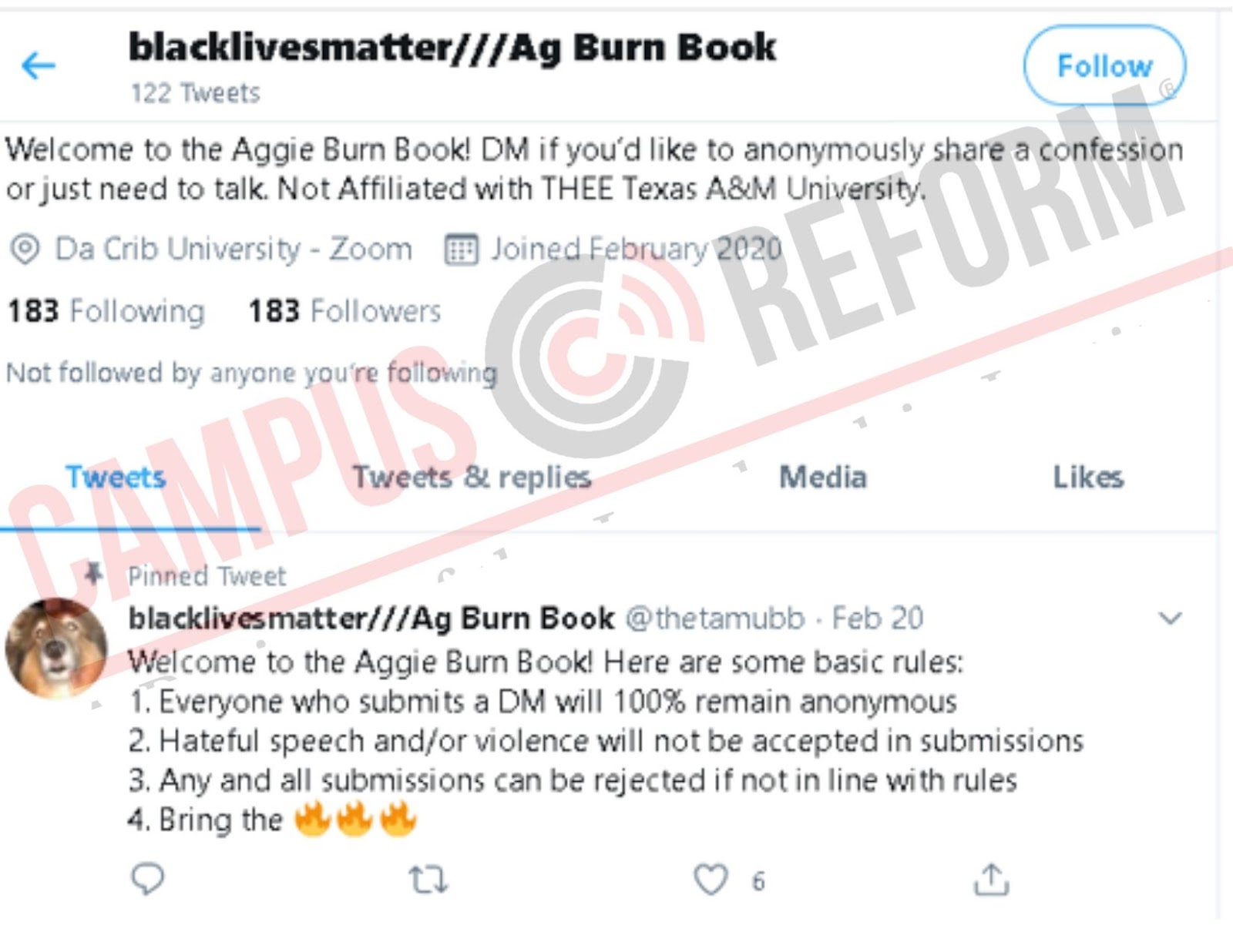 Students were added to the Twitter thread for various reasons, including being conservative, being affiliated with Turning Point USA, having retweeted tweets from other conservatives, and denouncing the violent riots currently spreading across America.

After the account listed several conservative students along with their pictures, the official Texas A&M Twitter account responded, thanking the account for calling attention to these students, and reassuring that university staff would be looking into the situation.

"Thank you for bringing this thread to our attention. We've passed it along to Texas A&M officials." 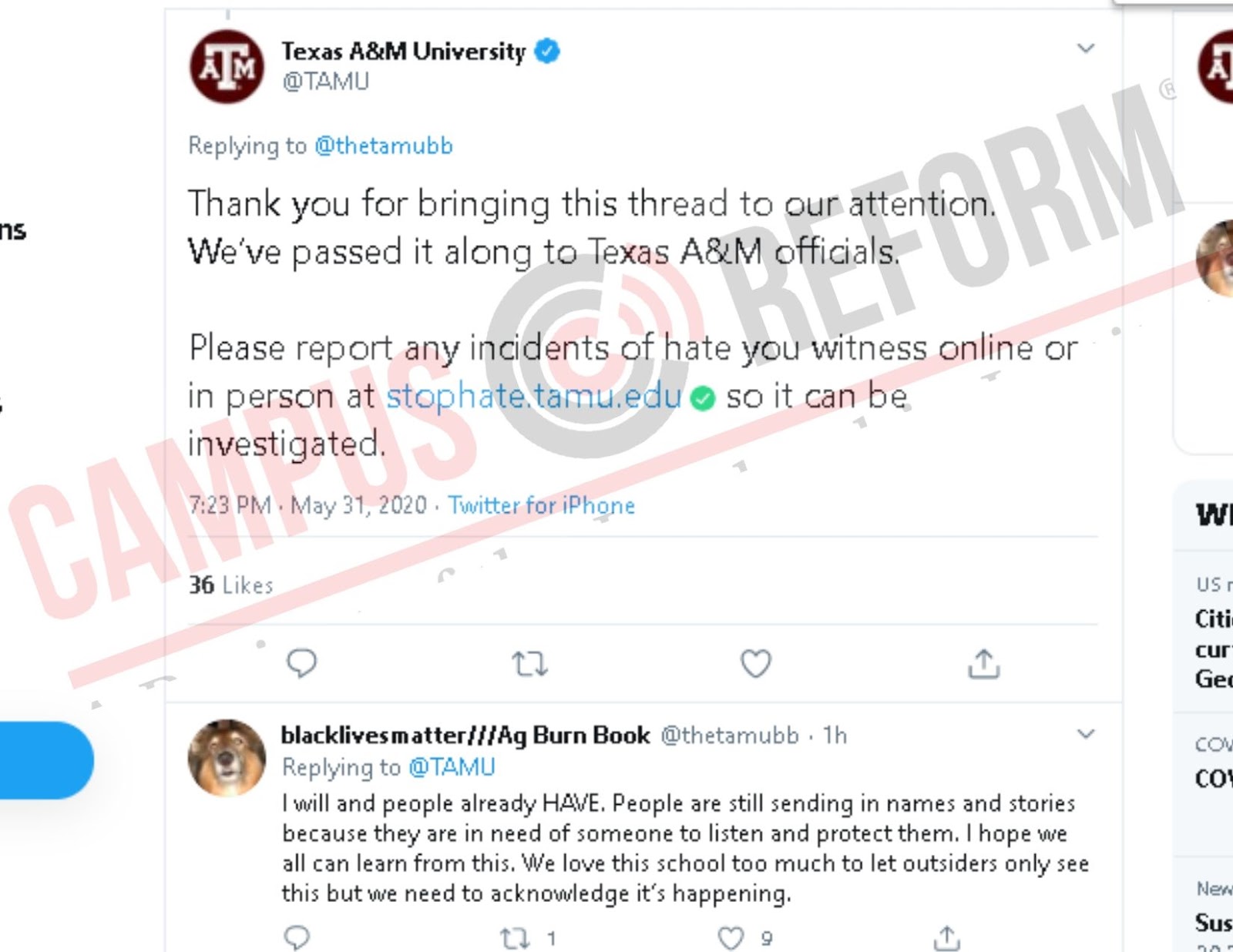 “It is common for Texas A&M to target conservatives,” Dallmeyer told Campus Reform. The harassment of conservatives comes at no surprise for her. “Texas A&M claims to operate under core values; however the University's actions prove otherwise. This incident is just the latest release of Aggie Twitter: the term for the leftists on campus who call out and harass conservative students on social media."

“Texas A&M has long held the reputation as one of the last conservative higher education institutions in America; however, that notoriety is quickly dissipating,” added Dallmeyer.

At the end of the thread, the account promoted the university’s official bias reporting program, where students can report instances of “hate” directly to the university.  The account claimed that it would “not continue to add to the thread, only update if allegations or information is incorrect,” in order to give the university time to “work on each incident and hopefully update in a timely manner."

In 2019, Campus Reform reported on the doxxing of conservative students at the University of Texas, before they ever stepped foot on campus.

The leftist group threatened any students seeking to join conservative campus groups as freshmen with doxing, the public release of their personal information, such as phone numbers and addresses.