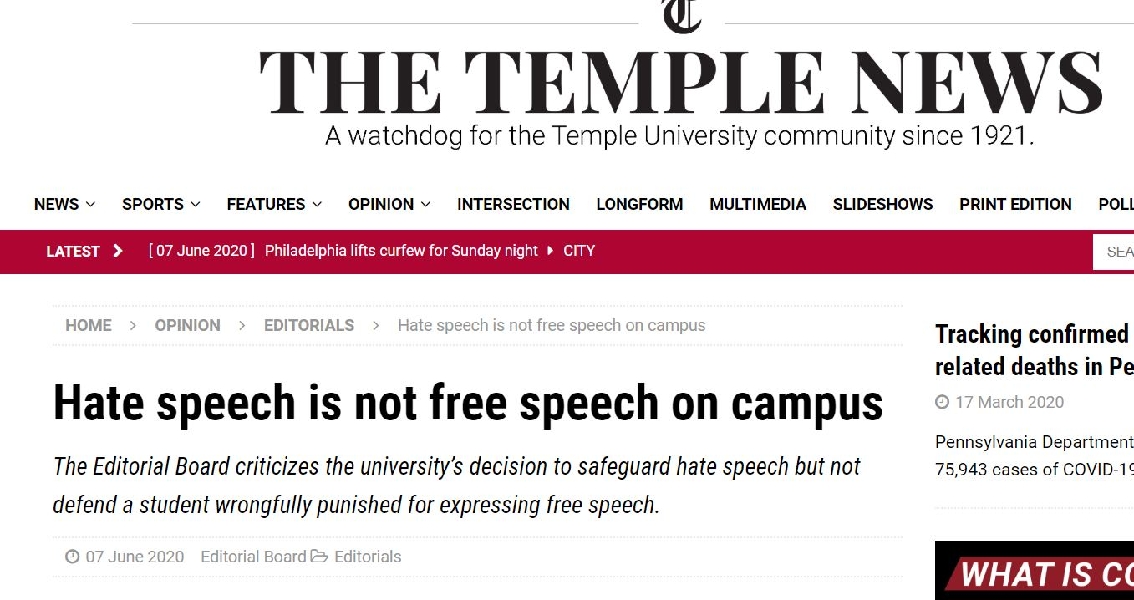 Temple University’s student newspaper editorial board published an editorial criticizing the school's administration for not denouncing hate speech. The piece came in response to a thread of tweets on the official university Twitter account defending the First Amendment after another Twitter account reported allegedly racist students on the social media platform.

“Temple respects the first amendment rights of all, including those that express unpopular and even hateful speech that is antithetical to the university's mission. Temple’s Conduct Code is in accord with the First Amendment and students are not disciplined solely for speech unless circumstances indicate there is a violation under the Code," Temple tweeted Friday.

"take a step back and consider: who will have the authority to decide what's hateful and offensive, and what isn't?"

(2/2) Temple’s Conduct Code is in accord with the First Amendment and students are not disciplined solely for speech unless circumstances indicate there is a violation under the Code.

An editorial published Sunday by The Temple News pointed out that the Student Conduct Code doesn’t mention either hate or racist speech, specifically, writing that all members of the community should be respectful of one another despite any of their differences. The student newspaper editorial board claimed that Temple cannot allow speech that “threatens the physical and emotional security of its students."

It further claims that “hate speech...is disruptive to the learning process for people of color" and that “not condemning hate speech is tolerating it." The board writes that the university must acknowledge “the violent nature of hate speech."

The proposed solution to recognizing hate speech and denouncing it is to change the “language in the Student Conduct Code to actively speak out against racism, racist speech and racist acts in the Temple community." Before any changes are finalized, the editorial board recommends that the university “consult with multicultural student groups and community members."

Nicole Neily, president of Speech First, told Campus Reform that Temple University “cannot discriminate against students based on the content of their speech. The sentiments expressed by Temple students may be ugly, and they may be unwelcome - but they are very clearly constitutionally-protected."

“The statement 'hate speech is not free speech' is both factually incorrect (because the Supreme Court has never created such a carve-out, despite 48 percent of college students believing that it is not protected), and deeply ignorant," Neily added.

“On its face, banning or punishing 'hate speech' might seem like a good idea - who's in favor of 'hate," after all? But take a step back and consider: who will have the authority to decide what's hateful and offensive, and what isn't? Throughout history, majorities tried to silence minority viewpoints by deeming them 'hateful' - minority viewpoints such as support for women's suffrage, opposition to Jim Crow-era segregation, and gay rights. The editorial board assumes that the powers that be will always be on their side - and that's a very dangerous assumption to make," she continued.