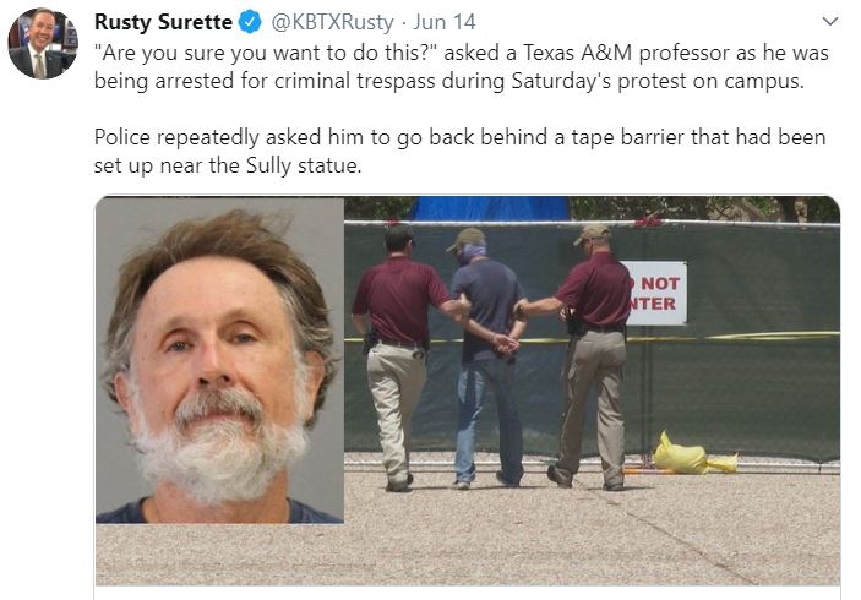 A Texas A&M associate professor was arrested for "criminal trespassing" at a protest against a campus statue.

Texas A&M associate professor of anthropology Michael Alvard was arrested during a protest in favor of removing the statue of a former university president. Details of that demonstration, which involved the vandalization of the statue, were previously reported by Campus Reform.

"I knew that the police would not kill me or throw me to the ground or stomp on my neck."

Two opposing groups, each consisting of students, alumni, and faculty, gathered in front of the Sul Ross Statue in the middle of the Texas A&M campus. One side demonstrated for the removal of the statue and the other side against the removal.

Dion Okeke, a Texas A&M junior who attended the protest, described the event to Campus Reform, saying, "people from both sides willingly expressed their opinions across the rope."

According to the police report, Alvard crossed a barrier intended by police to keep the opposing groups of protestors separated. After Alvard allegedly refused to comply with officers’ warnings to return to his side of the tape, he was placed under arrest, KBTX-TV reported.

Blake Martin, a Texas A&M student who advocated against the statue’s removal at the demonstration, told Campus Reform, “This moron broke the perimeter that was set up by police. They asked him to stop and go back to their side, but he refused and then got arrested.”

In a video purporting to show the arrest, students are heard loudly chanting “let him speak."

TAMU Professor and Leader of the Cultural Anthropology Program, Michael Alvard, was arrested at the Sully Statue protest for trying to speak to both sides of the protest. Yes, one side is counter protesting racism. pic.twitter.com/jQIbwnkzN3

“It seemed as if these ‘protestors’ were trying to start a scuffle as soon after the rest of them broke the police perimeter,” Martin added. “While none of our guys did the same.”

According to KBTX-TV, Alvard was charged with one count of criminal trespassing.  He was released the day he was booked on a bond of $2000.

Alvard sent Campus Reform his official statement on the incident. He said that he decided to cross the barrier because he is a “white male of privilege: "I knew that the police would not kill me or throw me to the ground or stomp on my neck.  I can afford to post bail."

If given the opportunity to speak, Alvard told Campus Reform that his plan was to speak directly to the leadership of Texas A&M.

“I had planned to ask those men, and the one woman, to think about the Aggie values that we are reminded of so frequently,  and to try to understand that the values of excellence, integrity, leadership, loyalty and especially respect are NOT consistent with a life of ethnic cleansing, violence,  slavery, segregation, and the Jim Crow racism that featured so conspicuously in the life of Sullivan Ross,” Alvard told Campus Reform.

In an effort to remind Texas A&M University president Michael Young of a message he sent to students following George Floyd’s murder, Alvard said, “As a university, as a community and as a nation, we must remember that our history and our future are informed by the values that guide us and the ideals that shape us.”

“I’m not the story. The story is the lives of black people and other people of color in our community who must suffer day-in and day-out with the institutional racism that the Ross statue represents,” Alvard explained. “The real heroes are the young people that organized the rally and marched to demand change. They are the future, and the A&M administration is going to have to confront that reality very soon,” Alvard said.

According to a Texas A&M Young Democratic Socialists tweet, $3,000 was raised to cover the cost of Alvard’s bail. All excess funds are being donated to The Bail Project, “a non-profit organization designed to combat mass incarceration by disrupting the money bail system.”

We are happy to announce that we have reached our goal of $3000 in bail funds for the professor who was wrongly arrested for speaking out for us today!! Please continue to donate just in case so that we have a buffer to support him after his arrest https://t.co/3TGAoS6tgA