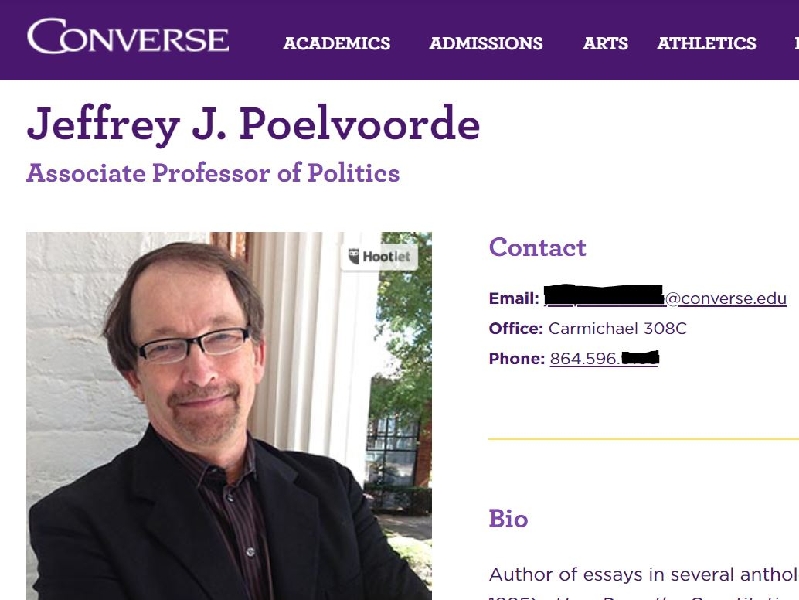 An associate professor at Converse College has publicly refused to take university-sponsored diversity and anti-bias training and wrote that the school's administration intended to fire him as a result. The school told Campus Reform that the professor is still employed - for now.

Converse College in South Carolina is undergoing several changes on campus. Currently, the institution is a private women’s college but will transition to becoming a co-ed university in fall 2021. The college will also change its name to Converse University in July 2021 to reflect the existence of its graduate program. As part of the reformation, it will institute new “required” anti-bias and diversity training for faculty.

Converse President Krista Newkirk sent a notice to faculty in June instructing them to complete mandatory diversity and anti-bias training. Faculty were instructed to complete the "required" training by 5 p.m. Monday, August 3.

Staff members were instructed in March to complete the training, while faculty members were given the assignment in June.

The email did not state what would happen if faculty did not complete the training.

"Will it prohibit me from assuming my teaching duties? Will it ban me from Converse’s administrative structures or its public ceremonies? Will it bar my access to the internal means of communication of the College? Will it attach a reprimand to my professional record? Will it lower or cut off my salary? Will it terminate my position? Whatever comes, I believe that I have done the proper and correct thing..." Converse College Associate Professor of History and Politics Jeffrey Poelvoorde  wrote in an open letter, published by the National Association of Scholars, explaining why he "cannot and will not comply with this mandate."

According to an email obtained by Campus Reform, faculty were instructed to complete two, one-hour trainings. The first, called “Diversity and Inclusion Edu," “explores power, communication, identity, and privilege through the unique experiences of real people."

"The course will help you think about the importance of a respectful working environment and the barriers that prevent full participation," readd the email.

The second one-hour training, “Managing Bias,” “defines bias, describes how it affects the workplace, and encourages employees to use that knowledge to reduce the negative effects of bias." After completing the course, "Employees will understand that biases can affect our actions, which can have real impacts on people, and that if left unchecked, biases can create an unhealthy workplace culture.”

Poelvoorde sounded off against the mandated training by writing the open letter, questioning the genuineness of the Black Lives Matter movement, arguing that it seems that its leaders are “only concerned about the loss of the Black Lives that confirms their political narrative and supports their progressive ideology.”

The associate professor pointed out that Converse College’s “statements are strangely silent on the horrors that engulfed and continue to engulf innumerable African-American communities and the scores of American cities that lay in ruins after the violence and chaos took their toll.”  He said that his issue with the training is not the training itself but rather the “coercive imposition itself.”

“Does the urge to impose upon us this material derive from a sincere desire to free the College and its members from bigotry...or from a felt need on the part of our leadership (and throughout the academic world) to impose an ideological conformity which masks itself as an embrace of ‘diversity?’” he questioned.

Poelvoorde proposed a different solution that would help students “overcome the challenges of religious and racial bigotry.” Instead of the required training, the college should “provide for them a genuine and rigorous liberal education which would equip them with the intellectual depth and spiritual fortitude to follow the lead of Booker T. Washington.”

Pooelverde stated that he is the only orthodox Jew on campus and is a Republican. He asked where the college’s “embrace of ‘diversity and inclusion’” was when he was the victim of antisemitism and “intolerance” at Converse College.

“I do not tell President Newkirk or Provost Barker what to read or watch or think. I demand the same respect from them,” Poelvoorde said.

The associate professor encouraged the administration to rid the campus of “racial bigotry” however it wishes and urged students and faculty to “engage in debates and discussions" throughout the course of doing so. However, he urged the college to “see beyond ideology and embrace the complexity and diversity of opinions and interpretations that these events require.”

“And, finally, let them check their coercive impulses at the front gate of the College,” he concluded.

Following the publication of the letter, Poelvoorde said told Inside Higher Ed, "My department chairman has informed me that the administration intends to dismiss me for insubordination and other reasons. I’m going to the mat on this one.”

However, the college told Campus Reform that it has not taken action against Poelvoorde.

“Converse remains optimistic that all faculty and staff will complete this very reasonable and legitimate obligation by the applicable deadline for doing so,” Converse College Chief Communications Officer Holly Duncan told Campus Reform.

When asked if Poelvoorde is facing termination because of his refusal, Duncan said, "any situations involving non-compliance are confidential personnel matters on which Converse will not issue any statements.”

However, Duncan confirmed in a later email that Poelvoorde is still employed by the college.

"The deadline is 5:00 p.m. today," Poelvoorde told Campus Reform Monday morning. "They did not respond to my attorney's letter of last week.  After consulting with my attorney, we have decided to see how the College responds after 5:00 p.m. today. Then, we'll take it from there...including legal action and the court of public opinion, if necessary, and for that matter, likely."