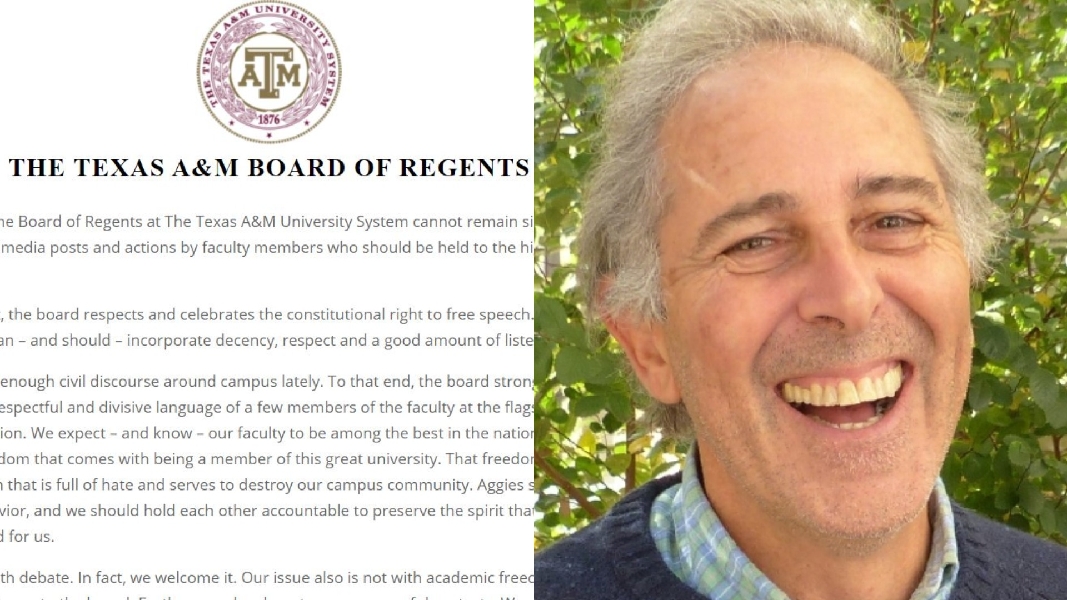 In an email to Campus Reform, Dean of the College of Liberal Arts Pamela R. Matthews confirmed that the university is "looking into" the matter. In a separate but unconfirmed email obtained by Campus Reform, Matthews allegedly said that the Texas A&M Office of Risk, Ethics, and Compliance has begun an investigation into Castro.

The Texas A&M Board of Regents issued a statement regarding the “recent social media posts and actions by faculty members who should be held to the highest standard of our core values,” because it could not “remain silent or inactive” any longer. The Board of Regents' statement came just four days after Campus Reform's exclusive reporting on the professor's posts.

The statement praised the First Amendment and added that it “should incorporate decency, respect and a good amount of listening.”

“To that end, the board strongly condemns the recent vulgar, disrespectful and divisive language of a few members of the faculty at the flagship university in Bryan-College Station,” the statement read. “We expect – and know – our faculty to be among the best in the nation and to exercise the academic freedom that comes with being a member of this great university. That freedom, however, does not include speech that is full of hate and serves to destroy our campus community. Aggies should not tolerate such divisive behavior, and we should hold each other accountable to preserve the spirit that generations of Aggies have forged for us.”

“If Texas A&M wants the financial support of its Alumnis then the University needs to uphold our values in exchange. If they don't, people will vote with their feet."

In addition to making political comments, Castro also expressed his disdain for religion on his Facebook page, stating that evangelicals want to “execute” non-evangelicals “in the public squares.”

“We all would prefer if there were no mosques, no churches, no synagogues, just libraries and museums. And ethnic restaurants,” Castro stated.

Castro's Facebook profile was public at the time of Campus Reform's initial reporting. Since then, the profile has been made private, or has been deleted. Campus Reform obtained screenshots of the posts, viewable below.

Both alumni and students said they have noticed a change in the university’s culture and value system in recent years and cite the incident with Castro as just one example.

Alumna Emily Fontano echoed this sentiment when she told Campus Reform that the university may risk future donations if the university's values are not upheld.

“If Texas A&M wants the financial support of its Alumnis [sic] then the University needs to uphold our values in exchange. If they don't, people will vote with their feet," Fontano said.

Upon reading Campus Reform’s article regarding Castro, many Aggies were, as current student Lauren Porter put it, “shocked and disgusted.”

Lauren Porter also said it “embarrasses” her that Castro is “representing” her university and told Campus Reform that “A&M absolutely needs to take action against this behavior.”

“A classroom is not an indoctrination camp. A classroom is a place to teach the subject you have been hired to teach. [Professor Michael] Alvard and Castro have no place in this university. It truly hurts me knowing the damage they are doing to our school and our students each and every day,” Lauren Porter continued.

“I thought College Station was one of the last few places where conversations could be had and arguments made without fear of being canceled...I have been disappointed in what is supposed to be a place of true academic discourse. It is becoming unacceptable to disagree,” said her sister, Abby Porter, who also goes to Texas A&M.

Texas A&M alumnus Matt Poling gave a hopeful message about the future of the university when he spoke to Campus Reform.

“Campus radicals have awoken a sleeping giant. I believe Texas A&M is going to make a stand for our common values and against the tribalism and racial conflict that’s causing so much damage to higher education elsewhere. We will show the way out of this death spiral for other institutions  All students will be the beneficiaries as they learn to practice tolerance, reason and personal responsibility. Values which will prepare them for service to our state and nation and for success in life rather than failure,” Poling said.