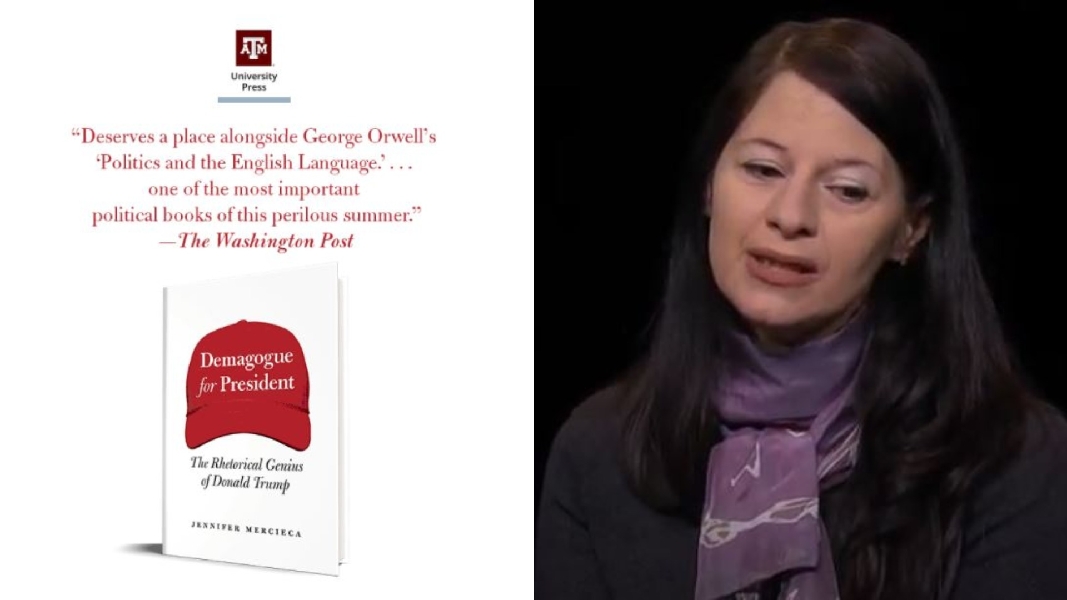 Texas A&M University Press sent an email to all faculty and students promoting a professor's newly published book, Demagogue for President. The author is a self-proclaimed “expert on Trump’s demagoguery,” who is also a Texas A&M professor.

Texas A&M University Press is the “book publishing arm” of the university. Its mission is to be the “preeminent academic press in selected fields by publishing high-quality books and other works that educate readers and advance knowledge in the most technologically and fiscally responsible way possible.”

“At a time when conservative voices are being silenced across this country, our university has decided to take a stance on who they are siding with..."

Quoting a review from the Washington Post, the subject line of the email to students read, "One of the most important political books of this perilous summer.” The cover of the book displays a red hat mimicking a MAGA hat but containing the book's title, Demagogue for President.

[RELATED: Universities across America want students to read this book. We did it for you.]

The email also included a description of the book, which characterized President Donald Trump’s rhetoric and campaign speeches as “simplistic, repetitive, and disorganized to many.” It also says that the Trump campaign exercised “rhetorical techniques of a demagogue.”

Mercieca described the campaign as “morally repugnant to some but to others a brilliant appeal to American exceptionalism.”

She highlighted the “two contradictory definitions” of a demagogue by contrasting “a leader who makes use of popular prejudices and false claims and promises in order to gain power” with “a leader championing the cause of the common people in ancient times.” Mercieca said this strategy was “effective” because of America’s “distrustful electorate.”

According to the associate professor’s website, Demagogue for President “shows how Trump took advantage of pre-existing distrust, polarization, and frustration to attack America.” She claimed that his rhetorical strategies are “dangerous for democratic stability.”

“I call him a dangerous demagogue because he uses weaponized communication strategies, which deny consent. And he does that through provoking outrage,” Merceica said in a discussion with the City University of New York's TV channel.

The book is one of Literary Hub's "Most Anticipated Books of 2020” and has been reviewed and lauded by Politico, CNN, and Salon.

Jonathan Tilove of the Austin-American Statesman said Mercieca is “probably the leading authority on Trump’s rhetoric."

“What he does that I’ve noticed that is authoritarian and is demagoguery is using the tu quoque, but also he uses ad baculum, which are threats of force or intimidation. And he’s just a master at wielding communication as force,” she continued.

Mercieca accused Trump of “violating the constitution” and “democratic norms,” “de-legitimizing political opposition” and “condoning violence.” In the context of these allegations, Mercieca referenced Yale University professor Jason Stanley, noting that "Stanley would say that it's fascist."

The associate professor extended her criticisms beyond Trump to his base.

“Everyone who attends a Trump rally enjoys the pleasure of violating the norms of political correctness. When you see the things that people are saying, wearing on their shirts, it’s really toxic and there’s a pleasure in that. It might be a sadistic pleasure, but you know, people really are seeing Trump as a vehicle for breaking the rules,” Mercieca stated.

The associate professor also co-authored a book on the Obama presidency called The Rhetoric of Heroic Expectations: Establishing the Obama Presidency in which she took a different tone.  The book questions if the “high expectations” Obama campaigned upon “hindered his ability to enact his agenda.”

“At a time when conservative voices are being silenced across this country, our university has decided to take a stance on who they are siding with. An email was sent to all of us students promoting a book that pictures the president and his supporters as bad people. As a senior and proud Latino Trump supporter I stand for what I believe in and know that my independent thought is not welcomed by this university's administration much,” he said.

Another student claimed that this is the only book promotion she has ever received from the university.

“While one might think that receiving emails from their university promoting certain books would be praised and accepted, the fact that Texas A&M has never sent me even one email regarding a book promotion but sent this out to other students suggests a very biased and pre-disposed message. This suggests that students who do support their President are not held in high esteem and should agree with the politics of those who wrote this book,” Gabby Sells, a junior at Texas A&M, told Campus Reform.

“I’m disappointed that the politics of the current political climate have permeated into the culture of Texas A&M which is supposed to remain unbiased and promote critical thinking and free speech. I don’t believe that any university but especially A&M should be promoting one political view over the other,” Sells continued.

Texas A&M University and Mercieca did not respond to a request for comment in time for publication.