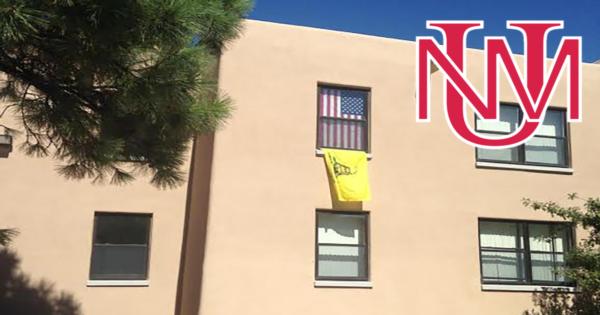 A student at the University of New Mexico was told to remove an American flag from his dorm room window over the weekend, ostensibly because the school doesn’t want other students to hang Confederate or Nazi flags.

Several students expressed outrage at the policy in interviews with ABC affiliate KOAT Friday after resident advisors told UNM student Bobby Schofield to remove an American flag from his dorm room window. Schofield said he was instructed that he is allowed to hang the flag in his room, but that school policy prohibits room decorations in “public spaces” such as windows and the hallway side of doors.

“It's a First Amendment violation for them to have to take down any kind of flag.”

“UNM didn’t want to start drawing a line between what you can hang in public spaces [and what you can’t], because you can see the flag from my window,” Schofield claims he was told by an RA. “He told me that if someone were to hang, say, the Confederate flag or a Third Reich flag, they didn’t want to have that showing, and so to make it easier on them, they said no flags.”

UNM student Ryan Taylor told KOAT that while he understands the school’s concerns, he doesn’t think a sweeping ban is the appropriate solution.

“There are probably some things that cross the line somewhere, but in general yeah what’s wrong with it,” he remarked. “It's definitely a First Amendment violation for them to have to take down any kind of flag.”

The school’s Residence Hall Handbook stipulates that “room decorations are to be in the interior of your room and may not extend into public spaces, including the hallway side of your room door,” but does not provide any rationale for the policy. UNM’s Housing Guide further specifies that “banners or signs hung from your exterior windows are prohibited.”

Anderson also provided a photograph of the window in question intended to show the isolated nature of the incident, which depicts an American flag hung on the inside of the glass, with a “Don’t Tread on Me” flag draped below it on the outside of the building. All of the surrounding windows are bare.

However, UNM student Michael Aguilar, who is also president of the school’s Young Americans for Liberty chapter, told Campus Reform that the recent enforcement effort is not consistent with his general experience.

“I lived in the dorms; I had a flag up and nobody ever told me anything,” Aguilar said, adding that he considers flags a frequent sight in windows on campus.

Saying that the only word for the policy is “ridiculous,” Aguilar also argued that he considers it a violation of First Amendment rights.

“Personally I think you have freedom of speech, and that extends to expression,” he explained. “I think you should be able to hang any flag that you want, as long as it doesn’t incite violence.”

Anderson referred Campus Reform to two other UNM officials for an explanation of the university’s rationale for banning all decorations from dorm room windows, but neither had responded by press time.

UPDATE: UNM Residence Life Manager Megan Chibanga told Campus Reform that while she was not present for the interaction between Schofield and his RA, she “can fully understand why the RA might explain the policy by referencing other flags,” though “it is not a specific concern that these flags might be shown.”

Suggesting that the RA may have been attempting “to explain the policy rational[ly] via an example instead of merely outlining the specific wording in the policy itself,” she noted that the description was nonetheless incomplete.

“The rational[e] behind the policy is first and primarily to prevent damage to our rooms, including the doors and windows,” she explained, observing that less damage to rooms allows both students and the university to save money.

“Secondly, the subjectivity of any one person's perspective about what is or is not offensive when it is displayed within the public spaces of the residence halls could create an environment where students, faculty, and staff are subjected to what they consider offensive materials on a regular basis, instead of an environment which is supportive of the academic mission of the university,” she continued.

“I hope to make it clear, we are in no way saying that students cannot hang an American Flag, or any flag for that matter, in their rooms, but as it is a personal room decoration, it simply needs to remain on the interior of their space, not in a shared public space such as a window.”