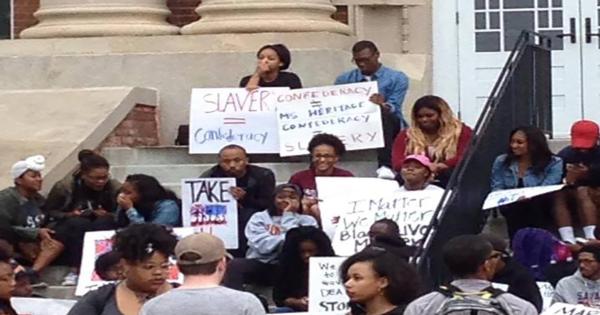 Students at Mississippi State University (MSU) protested outside of the president’s office Wednesday, demanding the state flag be taken down from its post on campus because of its depiction of the confederacy’s saltire.

“Take it down! Take it down!” protesters shouted while simultaneously chanting the battle cry of Black Lives Matter: “No justice! No peace!”

“It’s offensive to minorities and African-Americans...."

Although the primary goal of the protest was to combat some of the historical connotations of Mississippi’s state flag, students promised to submit a list of several other demands to MSU’s president.

“It’s offensive to minorities and African-Americans but it states in the secession letter that they fought in the war and that the flag represents slavery, oppression to African Americans and minorities, and it does not represent us as a whole," NAACP chapter president Wilbern Smith explained in a video obtained by Campus Reform.

He added that he and his fellow protesters plan to submit a list of demands to his school’s president once the flag is removed from campus.

“Our goal is to remove the flags off campus and then we’ll send a list of demands to our president and other administrators on campus,” Smith said. Among the demands, Smith explained, will be calls for “equal funding,” “equal housing,” and “just equal rights in general.”

Andrew Word, president of the Young Americans for Liberty (YAL) chapter on his campus, explained that although his peers have the right to peaceful assembly, there are several other issues worthy of a protest.

“One interesting point, though, I think is that in the cafeteria they have the flags of several countries, including Saudi Arabia, which is responsible for terrible human rights violations but nobody is saying anything about that,” he said.

Word also addressed the demands protesters promise to submit to the president, saying he’s confused by their requests for equal funding and housing.

“If you’re an official student organization then you get the same amount of funding so I’m not really sure what they mean by that” he said.

He also explained that all students have equal access to all dorms on campus so long as they complete the required application process.

“Yeah, I’m not really sure what they mean by that either,” he concluded.