Anthony Gockowski Contributing Editor/Investigative Reporter @AGockowski on May 11, 2016 at 9:52 AM EDT 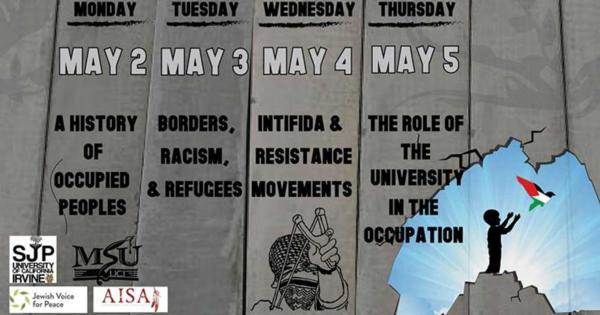 Students for Justice in Palestine (SJP) partnered with the Muslim Student Union (MSU) to host a week-long celebration of “anti-Zionism,” which coincided with Holocaust Remembrance Day.

The main feature of the event was a mock apartheid wall erected in the center of campus with a picture of convicted hijacker Leila Khaled, who is popularly credited as the first female to hijack an airplane.

"These people are Jew-haters. It’s disgusting."

“Women leading resistance,” a caption under her photo read in celebration of her accomplishments.

A separate image on the apartheid wall showed a tank under the caption “Expect resistance” and “Resistance is justified when people are occupied.”

Another photo depicted all of Israel as “occupied territory” and called on the university to divest from any companies associated with the Jewish nation.

Meanwhile, members of the school’s Students Supporting Israel (SSI) chapter were honoring their deceased ancestors on Holocaust Remembrance Day, but described the experience as a “fire of hate.”

In response, SSI built a bridge in front of the apartheid wall, saying “they build walls; we build bridges.”

The AMCHA Initiative, an anti-Semitism watchdog organization, condemned the anti-Zionism event and continues to track the high rates of anti-Semitic activity within the UC system.

“Once again, the anti-Israel students at UC Irvine are attacking Israel and its supporters through extremist voices like Netura Karta, a Jewish group that rejects the existence of the state of Israel and has been excommunicated by similar religious authorities and the greater Jewish community,” Roz Rothstein CEO of another Israeli advocacy group known as StandWithUs, told the Observer. “It is particularly heinous to ask for the destruction of Israel during Holocaust Remembrance Day, but is a common tactic of these anti-Israel groups to hold events during Jewish holidays and days such as these.”

The College Republicans at UCI also responded to the incident by inviting popular conservative pundit Daniel Horowitz to speak on campus.

“These people are Jew-haters. It’s disgusting. They hold it deliberately to humiliate Jews. The fact that Irvine is funding them is a disgrace,” Horowitz said.

Additionally, Horowitz argued that SJP and MSU are blatantly calling for “the destruction of the Jewish state” under the guise of “occupied Palestine,” the New University reports.

“[Israel] was created on land that belonged to the Turks who are not Palestinians or even Arabs,” he added. “The University of California, Irvine deserves its reputation as a campus that is friendly to anti-Israel terrorists.”

A spokesman for MSU, however, insisted on the contrary, saying the purpose of the anti-Zionism week was to promote the “recognition of native land.”

SJP and MSU then criticized the administration for even allowing Horowitz to speak on campus and ridiculed the College Republicans for favoring Horowitz’s opinion on the Israel-Palestine conflict.

“There are a number of speakers who could have been invited to provide a different perspective. It is not necessary for the College Republicans to incited polarization and hostility by inviting a renowned Islamophobe on campus,” said Falmata Mohamed, a public relations representative for MSU.

“We hold UCI accountable for allowing such harmful, violent people, who vehemently support genocide and settler colonialism on our campus, and will not engage in any commentary aside from condemnation,” SJP echoed in a statement released to the school’s newspaper.

Notably, the UC Board of Regents voted earlier this year to “condemn anti-Semitic form of anti-Zionism” but has remained mostly quiet about the latest incident on campus.