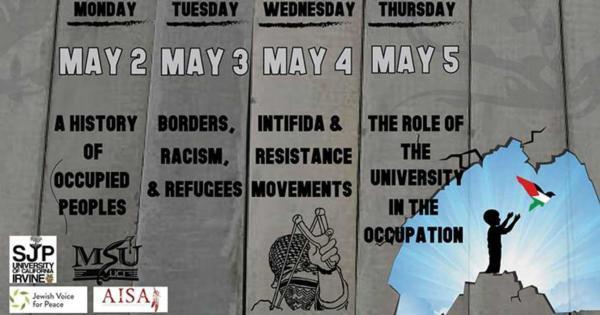 Dozens of civil rights groups are demanding a response from the University of California, Irvine administration for its failure to address a pattern of hostility and aggression against Jewish students.

“We are 36 Jewish and civil rights organizations representing hundreds of thousands of supporters who are deeply concerned about the long-standing and pervasive problem of anti-Semitic anti-Zionism that has incited hatred of Jews and acts of aggression and violence against Jewish and pro-Israel students on your campus,” the AMCHA Initiative wrote in a letter to the school’s administrators that was co-signed by the other advocacy groups.

“Jewish students report that UCI administrators have consistently turned a blind eye to acts of anti-Semitism that would have been promptly and vigorously condemned were they directed against any other racial, ethnic, or gender minority."

In the letter, the groups call on Chancellor Howard Gillman to “immediately implement” a recently-passed statement against intolerance—a motion approved by the Board of Regents in March, which, for the first time in UCI’s history, explicitly condemns anti-Semitic forms of anti-Zionism.

The passage of the resolution thus far appears to have had little effect on UCI’s campus, as Jewish students continue to report instances of blatant anti-Semitism.

“Jewish students report that UCI administrators have consistently turned a blind eye to acts of anti-Semitism that would have been promptly and vigorously condemned were they directed against any other racial, ethnic, or gender minority,” the letter continues.

Just last week, the groups note, UCI’s Students for Justice in Palestine (SJP) group “carried out a premeditated and violent disruption of an event hosted by Jewish and pro-Israel student groups.” Video footage obtained by Campus Reform shows a mob of angry SJP members attempting to forcibly enter a room where students were watching a film about the “Israeli Defense Forces.”

“Understandably terrified and fearing for their safety, Jewish and pro-Israel students who were at the film screening held the door shut to prevent aggressive protesters from entering the room, whereupon protesters pounded on the room’s door and windows and, for about an hour, screamed slogans that demonized and delegitimized Israel and called for and condoned terrorism against Jews,” the letter recounts, concluding that these Jewish students were “effectively held hostage.”

One student even reported to Campus Reform that she had to hide out in a nearby building while the mob passed, spending nearly an hour alone in the dark before she could return to her friends at the film screening.

Earlier this month, SJP partnered with the Muslim Student Union to host an anti-Zionism week, which featured a mock apartheid wall erected in the center of campus containing pictures of convicted terrorists. Meanwhile, members of the school’s Students Supporting Israel chapter who were honoring their deceased ancestors on Holocaust Remembrance Day, described the experience as a “fire of hate.”

Unfortunately, however, the AMCHA Initiative reports that these are not isolated events, but have been perpetuated over the last several years by a passive administration.

“A Jewish student leader reported to us that these recent acts of anti-Jewish bigotry at UCI are by no means exceptional,” the letter remarks. “Rather, they are wholly consistent with the long-standing and pervasive pattern of anti-Semitic and anti-Zionist behavior perpetrated by members of SJP and MSU, which, over the last several years, has created a toxic and hostile environment for many Jewish students. Nevertheless, according to the student leader, much of the blame rests with UCI administrators, who have acted with a discriminatory double standard when it comes to addressing Jewish student concerns.”

The letter concludes by calling on the administration to explicitly address how it plans to actively prevent instances of this kind in the future, demanding a response to several specific questions.

“How do you plan to implement the Regents statement in addressing the alarming problem of anti-Semitic anti-Zionism that has created an intolerable campus climate for Jewish students at UC Irvine?” the letter asks. “Specifically, what rules, policies and procedures will you invoke or enact, and what educational initiatives will you establish, to ensure that anti-Jewish bigotry will be treated as promptly and vigorously as all other racial, ethnic, or gender bigotry, and to guarantee the safety and well-being of Jewish students, and all students, at UC Irvine?”

The AMCHA Initiative says it has not yet received a reply from UCI, but a spokesperson for the school told Campus Reform that a statement is being composed. This story will be updated once that response is received.