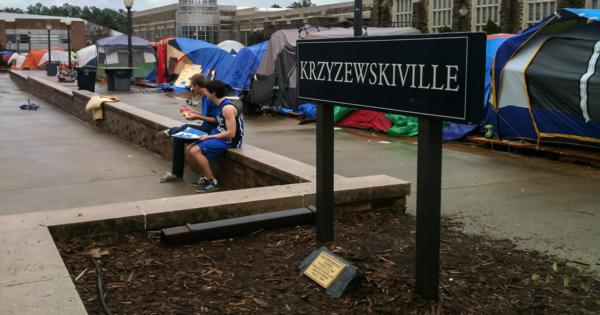 College hoops is getting political and student activists are feeling nervous in response to a North Carolina law requiring people to use the public restroom assigned to their gender at birth.

Duke men’s basketball coach Mike Kryzyzewski denounced HB2 Wednesday, less than a week after the University at Albany’s team announced it was pulling out of a preseason tournament held at Duke University because of a ban on state-sponsored travel to North Carolina that was instituted to protest the law.

“My friend who is the same gender they were at birth will check the bathrooms first.”

“It’s most unfortunate,” White noted. “As an institution, if not personally, we have gone on the record indicating that our state position on this is very troubling, if not embarrassing.”

Mark Gottfried, head coach for the North Carolina State men’s basketball program, says he was appalled by the passage of HB2, and that it has been awkward for him to explain it to recruits’ parents on scouting trips.

“I’m against any law that allows discrimination, whether that’s based on race, gender, sexual orientation,” Gottfried told USA TODAY Sports. “I don’t understand how someone can support this. I think the people at NC State, we believe in inclusion. Being a resident of this state, for me and my family, it’s been frustrating.”

Shane Windmeyer, executive director of Campus Pride, an LGBT activism group based in Charlotte, described Albany’s refusal to play Duke a step in the right direction, though he also indicated that he believes more can be done.

“Albany not playing Duke, that’s the kind of activism we need to create change with this bill,” Windmeyer opined. “The NCAA talks a lot about inclusion and diversity but just waffles through statements without any actions.”

The National Collegiate Athletic Association (NCAA), which oversees most college sports, is hinting at punishing North Carolina over HB2, because as ESPN explains, cities hosting tournaments must prove to the league that arenas are discrimination-free zones.”

The discomfort over HB2 extends beyond college basketball, though.

Students attending Campus Pride’s annual LGBT student leadership training in Charlotte, called Camp Pride, said they were hesitant about coming to North Carolina because of the law, WSOC-TV reports, and organizers estimate that attendance was down 31 percent this year due to concerns related to bathroom safety.

Rain Garant, a transgender student leader from James Madison University, went to extreme measures to avoid using a public restroom while travelling to and participating in Camp Pride, saying he avoided salty foods that would make him thirsty and cause him to drink too much fluid, hoping he wouldn’t have to go to the bathroom.

Inevitably, the call of nature struck, but Garant said he had a strategy to deal with it.

“My friend who is the same gender they were at birth will check the bathrooms first,” Garant explained. “I was just really afraid somebody might say something.”

Camp Pride was held at the University of North Carolina at Charlotte, which has said it will not uphold the law despite instructions to the contrary that were issued in April by the UNC system’s president.

Students were happy to hear that the university conference center in which Camp Pride was held boasts multiple gender-neutral restrooms, though attendee Juniper Cordova-Goff did remark that “transgender people are more than just people who have to pee.”