Will Rierson North Carolina Campus Correspondent @RiersonNC on Aug 08, 2016 at 11:26 AM EDT 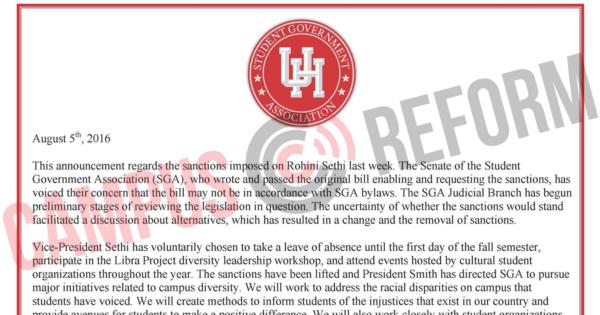 Rohini Sethi, the University of Houston (UH) student body vice president who denounced Black Lives Matter, has seen the sanctions against her removed.

UH president Shane Smith released a joint statement Friday with vice president Rohini Sethi, explaining that the sanctions may not have been allowed under student government rules, though Sethi agreed to punish herself, The Daily Cougar reports.

"I may have had the right to post what I did, but I still should not have."

Smith and Sethi said they hope to unify the campus and increase cultural appreciation.

Sethi posted “Forget #BlackLivesMatter; more like #AllLivesMatter” on Facebook hours after a gunman killed five police officers at a Black Lives Matter-inspired July protest in Dallas, Texas. Students, thinking that Sethi was ignoring racial inequities suffered in the black community, began using #RemoveRohini on Twitter, calling on student government officials to force her out of office.

“We will work to address the racial disparities on campus that students have voiced,” the executives promised. “We will create methods to inform students of the injustices that exist in our country and provide avenues for students to make a positive difference.”

The UH student senate, which originally gave Smith the one-time power to put Sethi on a 50-day leave and require that she attend diversity training, later became concerned that its bill punishing Sethi was unconstitutional. The student government’s judicial branch will review the legislation, but the sanctions were removed and a compromise reached for now.

Sethi voluntarily chose to place herself on a leave of absence until the fall semester begins and she will attend the diversity trainings previously required by the sanctions. Her unpaid leave will last 15 business days.

A critical difference in the sanctions and her self-imposed punishment is that she can no longer be removed from office for failing to reform herself to the student senate’s standards.

Sethi blamed herself for causing division amongst the student body.

“I may have had the right to post what I did, but I still should not have,” Sethi said. “My words at the time didn’t accurately convey my feelings and caused many students to lose their faith in me to advocate for them. I take my responsibility seriously and want to re-earn their trust. I will always continue to learn and be ready to discuss these issues. When I return from my leave of absence, I will be prepared to place my full efforts into serving the students of UH.”

Smith defended his actions as well-meaning, despite the disagreement over their constitutionality.

“For those who were upset due to what they considered a violation of the first amendment, that was never my intention and I apologize for that impression,” Smith wrote. “I have tremendous respect for freedom of speech as a core American value. For those that are disappointed by the change, this is a compromise based in the reality of the situation. My stance on racial injustice has always been clear. For all involved, this is truly the best outcome.”

Smith continued, calling for the student body to forget the Sethi controversy and move forward, toward a vision of racial equality.

“As an organization, we will continue to make campus inclusivity a priority,” Smith wrote. “We will learn from this experience, but it is absolutely essential that we put the situation behind us and return to work. Our positions have only one responsibility—to improve the daily lives of our students. For the last few weeks, we have failed. We must promise to use the remainder of our terms to honor the faith our students placed in us.”

The UH NAACP chapter president said he thinks that the issue is not coming to a neat end.

“The reduction is disappointing to hear, but I’m personally past this Rohini situation,” Wesley Okereke said. “We, as the Black Caucus, are going to be focusing our energy into other pressing issues. I don’t think the reduced sanctions will quell anything, in fact, I think tensions have a possibility of escalating, seeing as how this whole situation transpired over a very long period of time.”