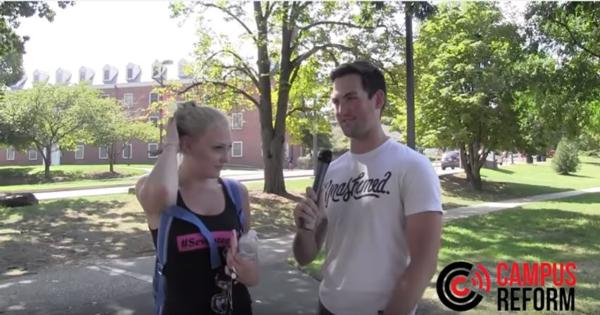 Last week, San Francisco 49ers Quarterback Colin Kaepernick refused to stand during the playing of the National Anthem before his team’s preseason game, saying “I am not going to stand up to show pride in a flag for a country that oppresses Black people.”

Kaepernick was quickly trending on social media, with the majority of Americans expressing their displeasure with his actions, accusing him of protesting in a disrespectful manner.

“I know the tune, I just don’t know the words…”

Campus Reform went to the University of Maryland to find out what college students thought of the situation and if they viewed Kaepernick any differently than the average American.

“I think what he did was great, it’s heroic, it’s sending a message…” platitudinized one student.

“I would say it’s pretty heroic,” reiterated another. “I respect people who stand up for what they believe in.”

Kaepernick’s protest has also sparked a national conversation about the role and importance of the Star Spangled Banner in today’s society, and while many of the students who spoke with Campus Reform expressed an admiration for the anthem, the majority of them could not recite the lyrics when given the opportunity.

“I know the tune, I just don’t know the words…” said one student, while another admitted outright, “Yeah, no… I don’t know it.”

Over the course of the day, just two students were able to successfully recite the anthem in its entirety.

Watch the full video to see the rest of the student’s responses: https://youtu.be/_fY0gsoSEPA

Cabot Phillips is the Editor-In-Chief for Campus Reform. Prior to joining Campus Reform he spent time working on numerous campaigns—most recently as the Digital Grassroots Director for Marco Rubio’s Presidential bid. Phillips is also a YouTube Partner, creating and starring in numerous videos which have amassed over 70 million views across varying online platforms.  In 2016, Phillips was named to Red Alert Politics "30 Under 30" list of the nation's most influential young conservatives.