Peter Van Voorhis Contributor at The Washington Examiner @RepublicanPeter on Sep 09, 2016 at 10:43 AM EDT 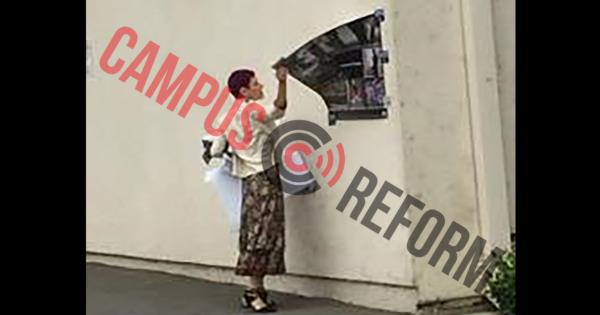 Members of the Young Americans for Freedom chapter at Saddleback College had their 9/11 memorial posters ripped down and shredded by the chair of the school’s History department.

According to The New Guard, the students were participating in the Young America’s Foundation “9/11: Never Forget” project, which involves planting 2,977 American flags to remember the lives lost 15 years ago on 9/11, when they were accosted by the professor, who proceeded to rip down their posters and direct them to confine their activities to one of the “free speech areas” on campus.

Lovett “blatantly infringed on our First Amendment rights by ripping down the posters.”

Prior to that altercation, The New Guard reported Wednesday that the school administration had cancelled the planned memorial service, prompting the YAF members to defy the prohibition by waking up before dawn to plant the flags and hang posters.

The students told Campus Reform that the perpetrator was Margot Lovett, a gender studies and humanities professor who has a history of controversial actions on campus. Notably, OC Weekly reported in 2001 that she had promulgated a statement by the Black Radical Congress to her colleagues blaming “U.S. Imperialism” for the 9/11 attacks.

After ripping down the posters, video footage of the incident reveals that the professor came over to tell the students that they were not allowed to put up posters on that part of campus, because it was not a free speech zone.

“I was absolutely amazed that a professor believed that they had the authority to tear down posters put up by students in remembrance of the terrorist attacks,” Audra Leslie, the president of the Saddleback’s YAF chapter, told Campus Reform. “Instead of going to a higher level student office she took it upon herself to rid a student organization's right to free speech on campus.”

After the incident, the students talked with the campus police department, student government, and school administration. All of them were unsure of the legality of the professor’s actions and the way she approached the students.

Thomas Columbus, the club’s spokesman and Treasurer, told Campus Reform that Professor Lovett “blatantly infringed on our First Amendment rights by ripping down the posters.”

He also vowed that the club “will be taking this issue up with the school and her department,” noting that “tomorrow we will be speaking to the chair of the humanities department about Margot Lovett’s blatantly hostile actions towards our YAF chapter, the First Amendment, and the victims of the 9/11 terrorist attacks.”