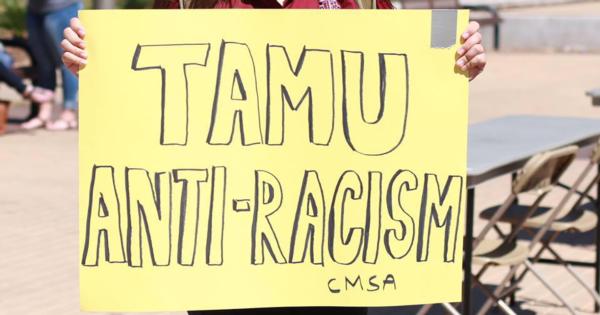 A group of students at Texas A&M is pushing for a mandatory “Racial Justice” class, citing the “historical racism” of their university as the reason such a class is necessary.

Emilio Bernal, a member of TAMU Anti-Racism, told Campus Reform that the group’s recent protests, which have included a Trump pinata, are intended to increase its profile in hopes of forcing the university to act on its demands.

The Trump pinata is meant to show “that we’re not all racist here.”

Bernal told Campus Reform the Trump pinata was partially in response to the existence of another student group, Aggies for Trump, and was meant to show others “that we’re not all racist here.”

Bernal noted that TAMU is predominantly white and predominantly conservative, but said that because the pinata is part of Mexican culture, the group decided to play Mexican music during the event, though he added that the students did not destroy the pinata because they “didn’t want to be compared to” a 2009 anti-Obama event put on by TAMU’s Young Conservatives of Texas student group.

Instead, they allowed “students of color” to write down their experiences with racism on campus and stick the pieces of paper through a hole in the Trump pinata’s head.

“We consider this a small event. We have things coming up that are bigger than what we’ve done before,” Bernal told Campus Reform. “We have this problem at the university of racism. We just hated the way the administration dealt with things, so we created all these ideas, push for this or that, and decided the best thing we could push for, and most probable thing to achieve was this course.”

He believes that if all undergraduate students are required to take an anti-racism course just like English or math, “that it would begin to create, or further the culture of anti-racism."

Following an incident earlier this year in which a group of mostly-black high school students were subjected to verbal abuse while touring campus, KBTX reports that Bernal and a number of fellow activists held a demonstration in April to demand such a course.

Specifically, the group wants the university to expand its “Community of Respect” workshop, which is currently required for incoming freshmen, into a full-blown general education course, though Bernal clarified that he would prefer that it replace an existing course rather than an addition to the gen-ed requirements.

According to Bernal, the university originally agreed to begin offering the course during the Fall 2017 semester, but has continually pushed the date back while debating whether to make the course optional and how to address the concerns of white students who may not agree with the ideology of the class.

He also said the group draws inspiration from Concerned Students 1950, an informal student organization that held protests at the University of Missouri last fall after one member led a hunger strike in a successful effort to get UM System president Tim Wolfe fired.

“What we saw with the University of Missouri is universities generally, just like other institutions, guard their reputation,” Bernal said. “The only way we could make [Texas A&M] pay attention to us is to put their reputation at stake.”

Campus Reform reached out to Texas A&M for confirmation of Bernal’s claim regarding implementation of the Racial Justice course, but had not received a response by press time.