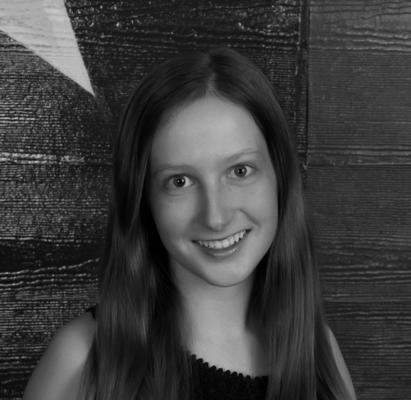 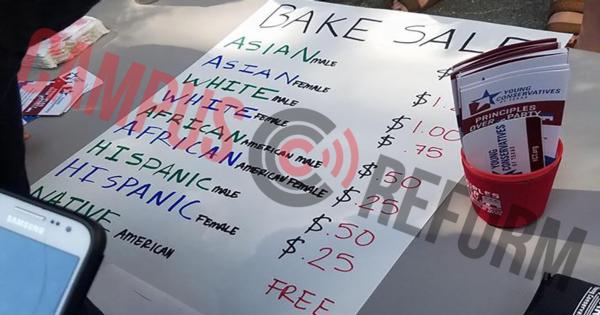 Liberal students at the University of Texas at Austin violently disrupted an “affirmative action bake sale” Wednesday, and now want to ban the conservative student group that hosted the event.

The school’s Young Conservatives of Texas chapter organized the on-campus display in an effort to highlight the inequalities of affirmative action policies by charging people different prices based on their race and gender, but many of their classmates apparently failed to find the humor in the stunt, and reacted by tearing up the sign and stealing the baked goods.

“[We] will not be deterred by liberal elites that would love nothing more than to silence conservative...voices.”

The bake sale “was designed to highlight the insanity of assigning our lives value based on our race and ethnicity, rather than our talents, work ethic, and intelligence,” explained YCT Chairman Vidal Castañeda. “It is insane that institutional racism, such as affirmative action, continues to allow for universities to judge me by the color of my skin rather than my actions.”

YCT mimicked the standard affirmative action process of giving highly preferential treatment to minority groups simply because they are minorities, yet it was largely students belonging to those minority groups who became angered by the lower prices being offered to them on the basis of their race.

YCT manfully endeavored to continue its demonstration in the face of fierce opposition from the large crowd of apoplectic protesters, who vehemently chanted slogans such as “hey hey, ho ho! These racist orgs have got to go!” and “racists go home!”

The conservative students were ultimately overwhelmed, and not only was their bake sale menu stolen and publicly torn up by an outraged male student, individuals wearing black masks even made off with the actual baked goods.

Apparently unsatisfied with merely vandalizing the display, the club’s antagonists followed up by starting a petition to ban YCT from UT, claiming that “this type of behavior should not be tolerated on a campus where a significant populous does not identify as white,” and that YCT should be stripped of its official status on the grounds of “bigotry, encouraging systematic racism, and promoting oppression.”

At press time, the petition had collected 709 signatures out of its goal of 1,000.

As a Hispanic conservative student and supporter of free speech, YCT member Al Uranga spots contradiction in the way his peers present their arguments, telling Campus Reform that he “witnessed an angry mob complaining about the negative effects of institutional discrimination of minorities while simultaneously and wholeheartedly defending the expansion of institutional discrimination via affirmative action. Hypocrisy is what I witnessed.”

At least one university administrator, however, resorted to victim-blaming, asserting that YCT bears full responsibility for the excesses of its assailants because, after all, there would have been no protest had there not been an affirmative action bake sale.

Vice President for Diversity and Community Engagement Dr. Gregory J. Vincent released an official statement in response to the incident, but rather than condemn the vandals, he chose instead to rebuke YCT for its “inflammatory and demeaning” methods.

Even while acknowledging that “the West Mall is a place where free speech is exercised by all students” and is “meant to be a space where students exhibit respect for each other,” Vincent still blamed YCT for the breakdown of civility, saying the group’s actions “create an environment of exclusion and disrespect among our students, faculty, and staff,” and are “counterproductive to true dialogue on our campus.”

Vincent’s deputy, Helen Wormington, offered a somewhat different appraisal, telling Campus Reform that “99 percent of [this bake sale event] was actual, respectful conversations” and that “these students came out and were able to explain their side of the story, regardless of how it started, and that’s why free speech exists.”

Despite the angry protest, online petition to ban YCT, and distinct lack of institutional support, Castañeda pledged that “YCT-UT will not be deterred by liberal elites that would love nothing more than to silence conservative, common sense voices on campus.”

Although conservative voices are the minority, he added, “[YCT] will continue to speak out against policies that are harmful or give preferential treatment based on nothing more than immutable characteristics.”

Jackie Rosenthal is a Texas Campus Correspondent, and reports liberal bias and abuse on campus for Campus Reform. She is a freshman business major at Texas A&M University. Jackie is involved with Turning Point USA, College Republicans, and formerly High School Republicans of Texas. She loves country and classic rock, shopping, animals, and baking.