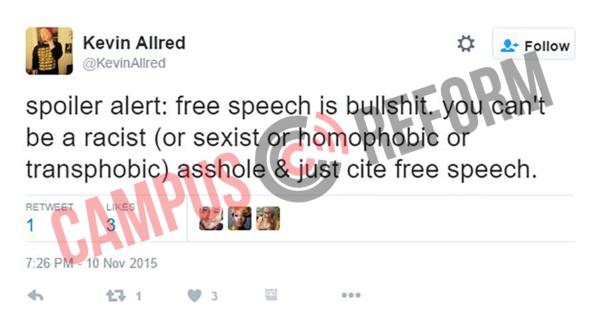 A Rutgers University professor was forced to undergo psychological evaluation after he threatened to murder white Americans as a way of testing their affinity for the Second Amendment.

In a Tweet written shortly after election day, adjunct professor Kevin Allred, who is apparently known for his “politicizing Beyonce” course, threatened to shoot white Second Amendment supporters to test their commitment to the tenet.

“Will the Second Amendment be as cool when I buy a gun and start shooting at random white people or no?”

“Will the Second Amendment be as cool when I buy a gun and start shooting at random white people or no?” he apparently wrote, though he was since forced to delete the tweet after Twitter, in an unprecedented crackdown on anti-Trump propaganda, temporarily suspended his account.

Allred, though, has since claimed that he “didn’t want to delete it” because he stands by “the fact [that] it’s protected speech.”

Consequently, after multiple complaints were filed about Allred’s behavior to Rutgers’ police department, local New Jersey authorities escorted him from his home to a nearby psych ward where he was required to submit to a psychological evaluation.

Although he was ultimately cleared by doctors, he continues to defend his actions as in accordance with his “fucking First Amendment rights” and attributes the fallout to President-elect Donald Trump’s apparent crackdown on free speech.

“This is a shitshow and is proof positive that Trump’s crackdown on free speech has absolutely begun,” he suggested in a later Tweet. 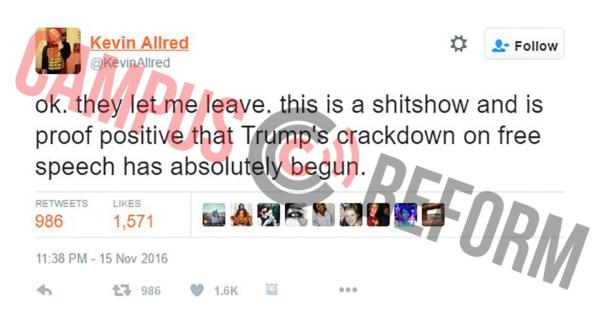 He has since clarified the intention of the initial Tweet, saying he was simply trying to show the “double standard,” and was merely “posing a rhetorical question.”

Ironically, Allred himself brashly proclaimed that “free speech is bullshit” in a Nov. 10 Tweet, elaborating that “you can’t be a racist (or sexist or homophobic or transphobic) asshole & just cite free speech.”

Allred’s future at the school remains unclear, which he has acknowledge on his Twitter, but continues to insist that he isn’t worried about his job prospects because he is used to working “each semester from the position of being fired” and has “never had job security” as an adjunct professor. He has event hinted at potentially working with the ACLU on bringing a case against the school, but has made no further official statement about the matter.

Rutgers insisted in a statement that the school simply “responded to a complaint from a student and took all appropriate action,” adding that it has “no further comment.”