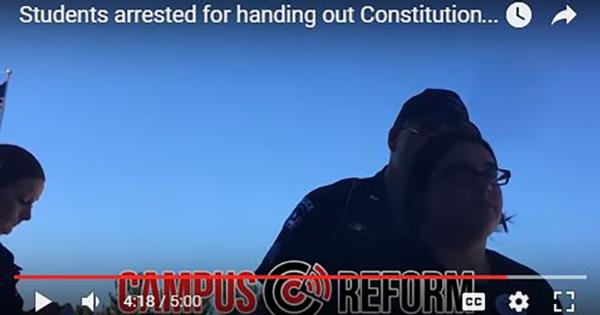 Kellogg Community College is being sued after campus police arrested three conservative activists and college students while they were handing out pocket Constitutions and signing students up for a conservative student organization.

[RELATED: Students threatened with arrest for handing out Constitutions]

“I’m digging myself into a hole here!”

As detailed in video footage obtained exclusively by Campus Reform, a KCC student and two fellow conservative activists spent two to three hours handing out Constitutions and recruiting for a Young Americans for Liberty (YAL) chapter on campus in September before they were accosted by administrators and ultimately arrested for trespassing.

The three activists in the video are Nathan Berning, a Stanford student and employee of the Leadership Institute; Isaac Edikauskas, vice president of Michigan State YAL; and Shelly Gregoire, president of Kellogg YAL.

They were first stopped by Drew Hutchinson, the manager of Student Life at KCC, who told them they couldn’t approach students outside or engage them in conversation because it could “obstruct the student’s ability to get an education.”

“We ask that you don’t do it in the middle of everything, and part of that is because if we obstruct the student’s ability to get an education then it kind of becomes counterintuitive to the whole, um, right to speak, kind of Second Amendment rights [sic],” Hutchinson explained, intending to cite the First Amendment.

The activists explained that they weren’t physically stopping students, and were allowing students to decide whether to stop and talk, with Gregorie stating that “[when] we’ve had people who have said they’re not interested, we don’t go after them.”

Hutchinson denied that students could make the decision not to stop, asserting that “these students also don’t know that they can say ‘see ya later.’”

Edikauskas then asked a student walking by if he “likes freedom and liberty.” The student replied, “sure” and stopped to talk to Edikauskas.

Hutchinson, however, declared that this action broke the Student Code of Conduct because the student was on their way to “educational places,” and the question, “Do you like freedom and liberty?” was too “provocative.”

[RELATED: Rutgers: No such thing as ‘free’ speech]

“You’re asking them a provocative question in which you are instigating whether they are American or not. It’s a very powerful question,” Hutchinson said, arguing that the “social pressures” of such a question would compel the students to stop.

The activists and Hutchinson continued to debate school policy until Hutchinson eventually exclaimed in exasperation that “I’m digging myself into a hole here!”

Berning told Campus Reform that about twenty minutes later, a security officer came up to the group and asked them why they hadn’t left campus, to which they responded that they felt as though the request violated their First Amendment rights.

Shortly thereafter, the activists were surrounded by several campus police officers and the Chief of Police, Harold West, who told them they were violating student conduct and that they would either have to leave the premises or move to a predetermined indoor location.

“Essentially what we’re asking you to do is comply and leave and get the proper permits,” West demanded. “Yes we do have civil rights, you have liberties, you have [the] First Amendment. However, when they start violating other people’s rights that’s when it starts to run into a problem.”

When Berning asked what rights they were violating, West responded, “You’re violating the school structure.”

A female police officer then explained to Gregoire that being arrested puts her academic career in jeopardy, and Gregoire responded, “I am. I’m putting my nursing degree in jeopardy.”

After the activists refused to leave the premises, the male police officer told them that they would be arrested and sent to jail for trespassing.

“I think we would be best off to handle it in court. Let the judicial system handle it,” said West.

Berning told Campus Reform that the three activists looked at each other, thinking, “I can’t believe this is happening.”

The activists were then placed under arrest and taken to jail.

Berning noted that while he was fully prepared to “stand up for the First Amendment” that day, he never expected that it would lead to an actual arrest.

“We knew what we were doing, we knew this could create change, but we didn’t go into it thinking we were going to get arrested. I thought they would just escort us off of campus,” he explained. “Once they said to us that they were going to arrest us, it just became a matter of principle that I was not going to leave”

“We were exercising our first amendment rights and they took us to jail for it and that showed me how important what we’re doing is,” Edikauskas told Campus Reform. “I would do it again in a heartbeat.”

The Alliance Defending Freedom, a legal organization that advocates for constitutional rights and religious liberty, has filed a lawsuit against KCC alleging that the actions of administrators and campus police officers violated the First and Fourteenth Amendments.

"Free speech is a right, not a privilege that can be censored by university officials on a public campus," ADF points out in a press release. "If public universities silence free speech on campus, they deny their students opportunities for engagement and learning. If public universities stifle these learning opportunities on campus, they impair a student's ability to function in the real world."