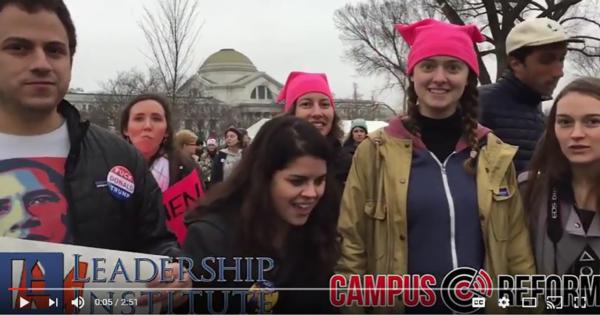 The day after Trump’s inauguration, hundreds of thousands of women descended upon D.C. for the Women’s March on Washington, an anti-Trump rally focused on women’s rights.

The March was criticized by some for disinviting a pro-life group from cosponsorship, perhaps sending a message that conservative women would not be welcome to participate.

“I don’t believe that being anti-choice is a feminist position.”

Campus Reform attended the March to find out why protesters were attending, as well as to ask their thoughts on the compatibility of pro-life ideologies with feminism.

After speaking with over 50 participants, the overall consensus was that Trump threatened women’s “reproductive rights”—i.e. abortion—and talks about women in a way that encourages “rape culture.”

“Grab her by the pussy,” one woman declared when Campus Reform asked how Trump threatened her rights.

“He is the emoji of rape culture,” another said.

Several women also mentioned equal pay, citing the debunked “77 cents” statistic, but did not know that the United States already has protections to ensure equal pay for equal work.

When the conversation moved to pro-life women, marchers overwhelmingly believed that pro-life women could not be feminist because feminism relies on “women’s right to choose.”

“I think pro-life women can be feminists as long as they don’t try to tell me what to do with my body,” one participant said.

“I don’t believe that being anti-choice is a feminist position,” another said, refusing to use the term “pro-life.”

While most marchers claimed to respect women’s choices, one woman interviewed by Campus Reform seemed most baffled by the fact that 42 percent of women chose to vote for Trump, “I guess because a lot of women want, uh, they want easy lives and the men they live with support Trump.”