Peter Van Voorhis Contributor at The Washington Examiner @RepublicanPeter on Mar 03, 2017 at 9:53 AM EDT 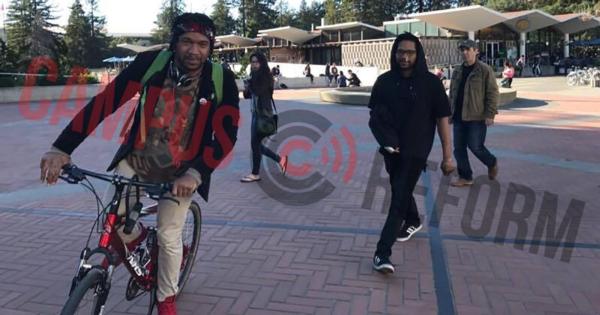 Hundreds of flyers appeared Thursday at the University of California, Berkeley claiming that the College Republicans “have been known to intimidate and physically attack activists.”

The posters, which referred to members of the College Republicans as “local baby fascists,” also claim that the CRs are white supremacists and that the group “invited armed militias” to a Trump rally scheduled for Saturday.

“Ultimately, they fear to have their beliefs challenged.”

According to the CRs, however, one of the individuals featured in the poster is not even a student at Berkeley, and another is not a member of the Berkeley College Republicans. 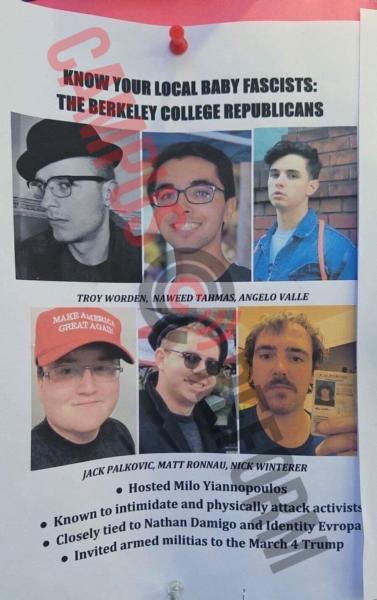 On the same day that the flyers appeared, campus leftists destroyed another one of the College Republicans’ signs right in front of them, less than 24 hours after another student perpetrated a similar attack that was caught on video.

“An individual approached our table at 3:40 and began to stomp on our sign and completely tore it apart,” CR member Naweed Tahmas told Campus Reform. “The (person) on the bike attempted to ram into me with it, but I was able to dodge it. The initial attacker began approaching me and that's when I began to back away.”

Later in the day, a member of the Berkeley College Republicans spotted the attackers and contacted the police. Police documents state the attacker’s name is Harlan Suashunn La Wade, according to Tahmas, who added that La Wade was charged with a misdemeanor for the altercation.

“[The attackers] continue to portray their intellectual laziness by referring to anyone and everyone they disagree with as fascists instead of engaging in an open debate,” argued Tahmas, who was among those featured on the campus flyers. “Ultimately, they fear to have their beliefs challenged.”

This week’s incidents “further prove the consequences of the one-sided political echo chamber that UC Berkeley inculcates,” Tahmas continued. “For two days in a row, back-to-back, we have been physically and verbally harassed. We've had two signs destroyed and now, have our faces posted around campus.”

The university administration is apparently inclined to agree with that interpretation, releasing a statement from Associate Chancellor Nils Gilman roundly condemning “all acts of vandalism and attempted intimidation” of Berkeley students. 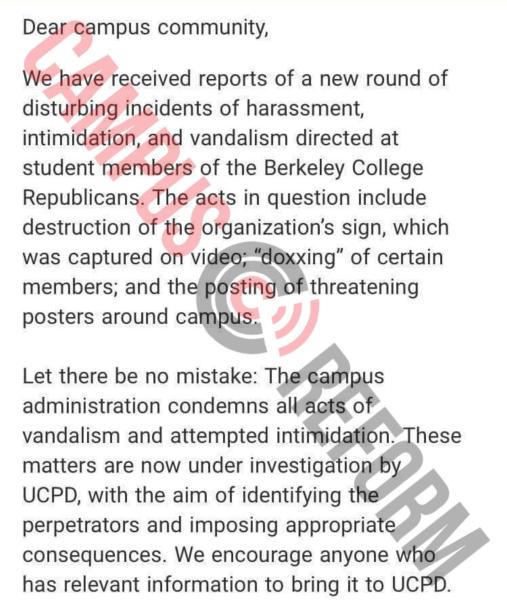 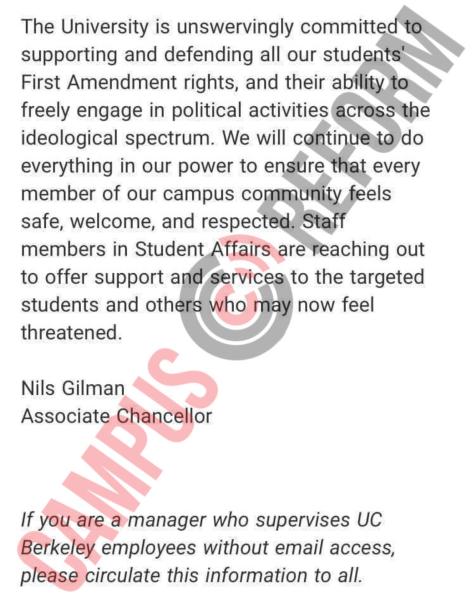 “We have received reports of a new round of disturbing incidents of harassment, intimidation, and vandalism directed at members of the Berkeley College Republicans,” Gilman informed the campus community, noting that campus police are investigating the incidents and encouraging anyone with relevant information to come forward.

“The university is unswervingly committed to supporting and defending all our students’ First Amendment rights, and their ability to freely engage in political activities across the ideological spectrum,” he concluded, vowing that “we will do everything in our power to ensure that every member of our campus community feels safe, welcome, and respected.”