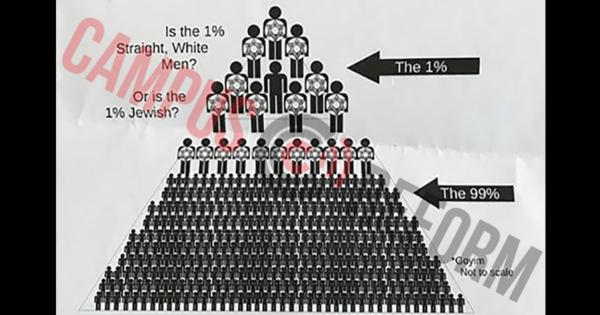 The “Jewish Privilege” posters that appeared at the University of Illinois at Chicago last month didn’t even use accurate statistics, according to the group whose research the flyers cited.

“The poster’s claims about income distribution among American Jews are groundless.”

To illustrate the point further, a pyramid diagram is included below the bulleted list with stick figures used to represent “the 99%” and “the 1%,” the latter being distinguished by the Stars of David imposed over all but one of the figures. 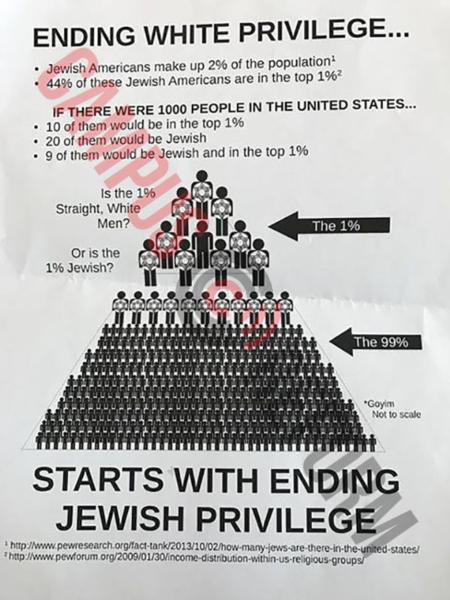 While this was only one of the many anti-Semitic posters put up around the campus—subsequent variations questioned the propriety of accepting donations from Jewish donors and complained about the percentage of Jewish students at several universities—the original had one particular flaw that made it stand out from the others.

According to the Pew Research Center, the claims made in that poster are not actually supported by the organization’s research.

“While it is true that Jews are roughly 2% of the U.S. population and that 44% of U.S. Jews report a household income of $100,000 or more, the poster’s claims about income distribution among American Jews are groundless and should not be attributed to the Pew Research Center,” Director of Religion Research Alan Cooperman told Campus Reform. “We do not know what share of Jews are in the top 1% U.S. of individual income earners and have never reported such a figure.”

In reality, the poster’s implicit assumption that a household income of $100,000 or more places it in the top one-percent of earners is outdated, according to Bankrate.com, which reports that roughly 20 percent of U.S. households hit that mark.

Cooperman also clarified that “our surveys ask about total household income,” and simply found that “44% of Jews have a household income—that is, the combined income of family members—of $100,000 or more.”

“We do not know what share of Jews are in the top 1% of individual income earners,” he added, “but it stands to reason that it is considerably less than the share who have household income of $100,000 or more.”