Prof: 'To save American democracy, Trump must hang' 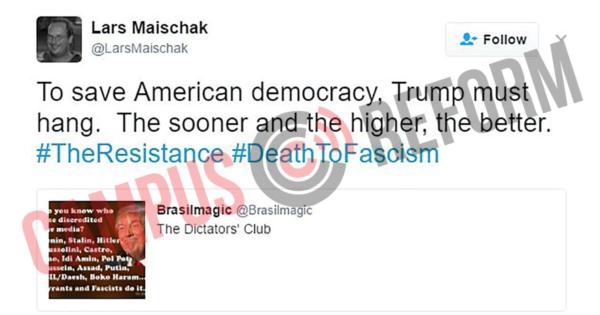 A California State University, Fresno professor who recently tweeted about executing Republicans has followed up by suggesting that Donald Trump should be sentenced to death.

Professor Lars Maischak tweeted on Sunday that he is “convinced, given the nature of his regime, that [Trump] will be held accountable for his crimes in a court...and that historical precedent suggests that a death sentence is inevitable, if democracy prevails.”

“I believe there is a correlation [between] his Twitter statements and his classroom behavior.”

[RELATED: Prof: ‘people are going to die’ because of white Trump voters]

The American history professor had already come under fire during the previous weekend for an earlier tweet that he made claiming that “Justice = The execution of two Republicans for each deported immigrant.” 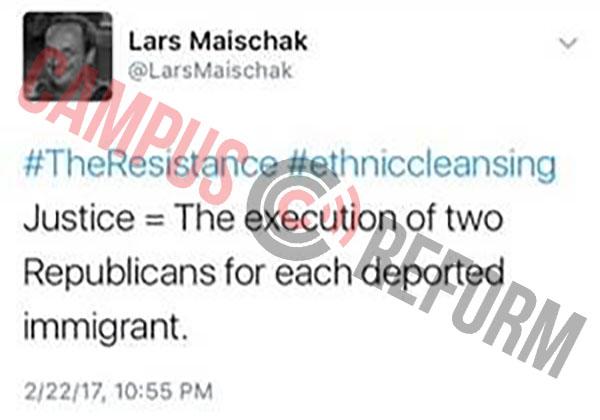 In addition to that February 22 tweet, Maischak has made numerous other statements promoting violence against Republicans, even claiming that “Trump’s Republicanism stands in a continuity with Fascism,” and that “to save American Democracy, Trump must hang.” 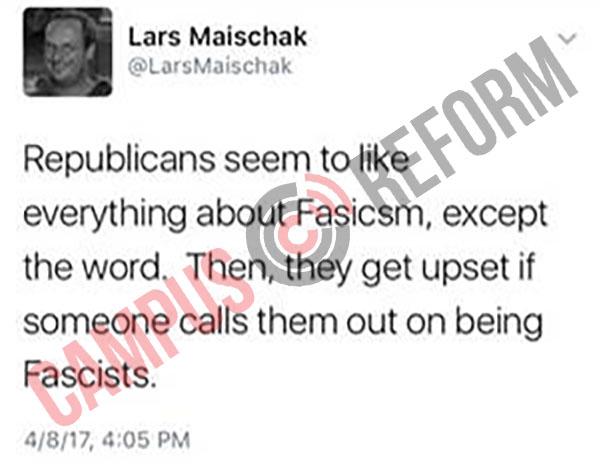 “I do not intend to harm Mr. Trump, nor do I wish for anyone else to harm Mr. Trump by way of an assassination!” Maischak subsequently clarified. “I am, however, convinced, given the nature of his regime, that he will be held accountable for his crimes in a court, and that historical precedent suggests that a death sentence is inevitable, if democracy prevails.” 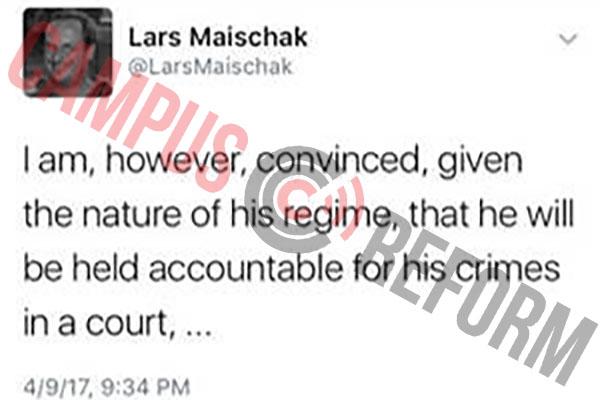 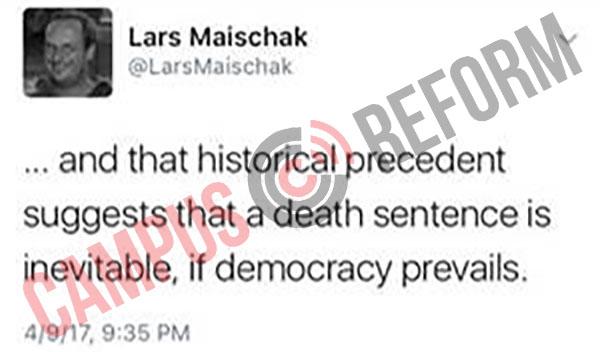 In response to the public outcry over the tweets, Fresno State President Joseph Castro released a statement acknowledging the “deep concerns” over Maishak’s comments, but saying that a preliminary review had determined that the statements were made in his capacity as a private citizen, not as a Fresno State professor.

“Professor Maischak’s personal views and commentary, with its inclusion of violent and threatening language, is obviously inconsistent with the core values of our University,” Castro declared. “We acknowledge that our faculty have an obligation to establish and maintain an ethical and professional conduct, inside and outside of the classroom.”

“While Fresno State is committed to state and federal constitutional rights of free speech, the content of statements by Dr. Maischak warrants further review and consideration,” he added. “The review of these and any other statements will be conducted in the context of rights of free expression, but also for potential direct threats of violence that may violate the law.”

Zachary Hill, a political science major at Fresno State, told Campus Reform that he found the lack of intellectual rigor underlying Maischak’s tweets “embarrassing,” but that he is also encouraged by the negative reaction to them.

“It's not embarrassing that a professor made an argument that the majority of people don't agree with, it's embarrassing that he hasn't elaborated on his argument,” Hill said. “It's also enlightening to know that our student body does not accept that sort of dialogue from someone representing us.”

Hill went on to remark that the incident “shows the level of aggression seen in classrooms taught by liberal professors,” saying, “I think a lot of my professors were expecting a lot of negative content from Trump, but have been forced to abandon fact-based thinking to avoid sounding like they were wrong about Trump.”

With respect to Maischak, specifically, Hill opined that “there is a correlation [between] his Twitter statements and his classroom behavior,” claiming that Maischak “is a classic socialist ideologue attempting to appeal to emotion rather than provide factual information.”

FSU student Kevin Balbuena, conversely, told Campus Reform that he does not think Maischak should be censured or otherwise punished for the tweets, saying they were clearly not intended as legitimate threats.

“I don't see the harm. He is expressing his opinion in a place made to express yourself,” Balbuena remarked. “The fact remains that only a fool would take his tweets serious[ly] and go about such actions.”

Maischak did not respond to requests for comment from Campus Reform, but told ABC that he was speaking of the “logical necessity” that Trump must hang, rather than expressing a desire to see that outcome effected.

“At the moment, based on my conviction that a majority of Americans are committed to Democracy, it, therefore, follows that ‘Trump must hang…,’” he explained, adding that “the word ‘must’” was intended to convey “a logical necessity rather than a demand or wish.”