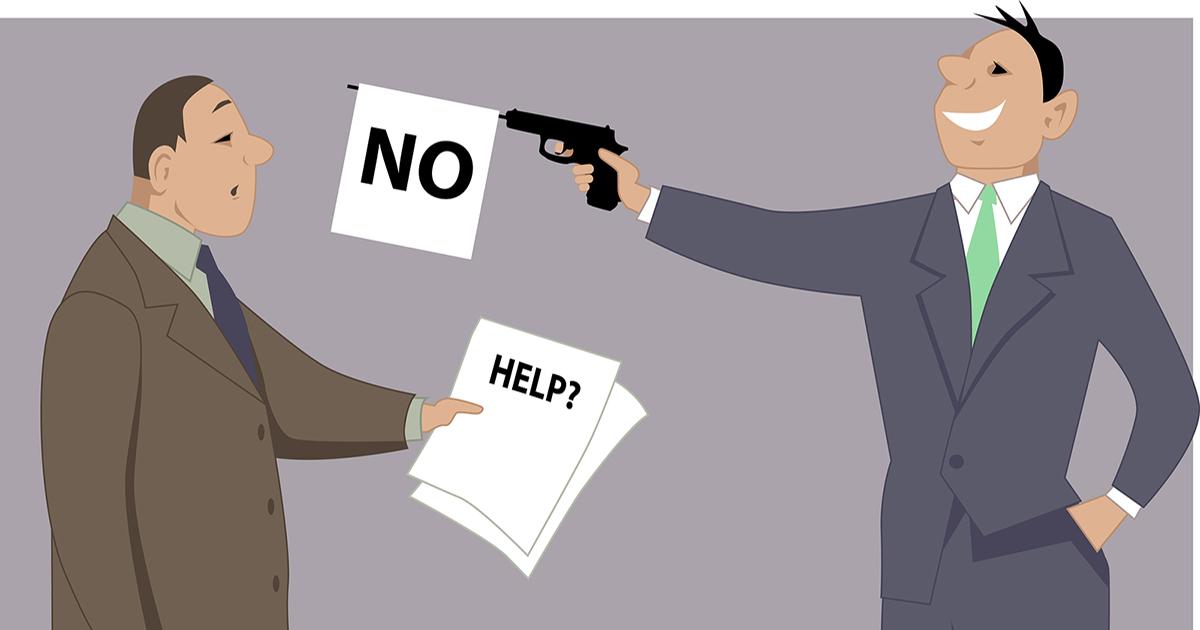 The American Association of University Professors claims to champion academic freedom, but many conservative (or just non-liberal) professors say the organization has ignored their plights.

The AAUP, founded in 1915 and now one of the most prominent higher-ed trade associations, boasts that it has a tradition of challenging institutions that “violate norms of academic freedom,” even offering a series of grants for professors impacted by “threats to academic freedom.”

"The AAUP should be regarded as a politicized guild, and not as disinterested partisans of academic freedom."

“In the aftermath of [Trump’s] election, it has become evident that his election poses a grave threat to the principles that lie at the very heart of the AAUP: academic freedom, shared governance, and economic security for those engaged in teaching and research in higher education,” AAUP President Rudy Fichtenbaum declared at his organization’s 2017 annual meeting.

And while the AAUP has lent a helping hand to conservative professors such as Mike Adams, who successfully sued his employer after being denied a promotion on the basis of his political views, such cases appear to fall few and far between, so much so that some scholars have dubbed the organization a “politicized guild.”

In fact, during one high-profile campus outburst, when Yale University Professor Nicholas Christakis was publicly berated by a hoard of raucous students upset with an email critical of Halloween-costume guidelines his wife had sent a few days prior, the AAUP remained all but silent as Christakis stepped down from a senior position and his wife, Erika, resigned under pressure.

Mr. Christakis, able to speak only briefly with Campus Reform, confirmed that he is “unaware of any public or private statements that the AAUP may have made” on their behalf.

Meanwhile, the academic organization has issued several recent statements in defense of liberal-leaning professors like Trinity College Professor Johnny Eric Williams, who was exposed by Campus Reform for labeling white people “inhuman assholes” followed by a hashtag of “let them fucking die,” which subsequently resulted in his agreeing to a leave of absence pending an investigation.

Shortly after, the AAUP released a statement to express concern that the “administration’s actions may have violated William's academic freedom,” and later praised his exoneration by the university as a “victory for academic freedom.”

Similarly, the organization issued a statement demanding that Princeton University “speak out clearly and forcefully in defense of the rights of faculty and students, generally, and Professor [Keeanga-Yamahtta] Taylor, specifically” after Campus Reform reported that Taylor had referred to President Trump as a “racist, sexist megalomaniac” during a commencement address at Hampshire College.

Even more recently, the AAUP touted another “victory for academic freedom” after a California State University-Fullerton lecturer, Eric Canin, was reinstated despite allegations that he assaulted a College Republicans member on campus.

Yet when conservative professors such as Anthony Esolen, Keith Fink, Robert Oscar Lopez, and John McAdams are on the chopping block, the AAUP is generally nowhere to be found.

The same goes for more politically-neutral professors who simply challenge campus orthodoxy, like the Christakis's and, even more recently, Evergreen State College Professor Bret Weinstein, who was forced to hold classes off-campus after campus police were unable to protect him from a mob of students who had angrily confronted him for questioning the legitimacy of an event in which white people were requested to leave campus for a day.

The AAUP did not release a single statement in support of Weinstein’s “academic freedom,” even after the student protesters held the school’s president hostage in his own office to demand, among other things, that Weinstein be summarily suspended without pay.

“My thoughts regarding the AAUP are much like my thoughts about the ACLU,” said George Leef, director of research for the John William Pope Center for Higher Education Policy. “It avoids battles where it doesn’t like one of the combatants, principle be damned.”

David Randall, director of communication for the National Association of Scholars (NAS), expressed similar sentiments, acknowledging that while the AAUP did play an instrumental role in Adams’ lawsuit, “it is easy to find cases in which conservatives on campus have suffered significant infringements of their academic freedom in which the AAUP has been mute.”

Indeed, the AAUP said nothing when former Providence College Professor Anthony Esolen wrote a series of articles critical of his employer’s diversity agenda, which resulted in a petition calling for his ouster, a public rebuke from the school’s president, an on-campus student protest, and Esolen’s eventual relocation.

“I suspect that the AAUP would have sold the oil for me to be boiled in,” Esolen remarked in an interview with Campus Reform. “Maybe I'm wrong about that, but we've been hearing these stories about leftist campus activists for a long time, and the AAUP seems to have done nothing.”

Then there’s the case of Professor Keith Fink, a University of California at Los Angeles (UCLA) professor acclaimed for his popular courses on free speech. Fink was recently let go after being subjected to a demonstrably biased faculty-review committee, though again the AAUP stayed quiet.

“I don't suspect the AAUP would have any interest in assisting me. If they did they would have contacted me as did FIRE [the Foundation for Individual Rights in Education], which is an organization truly devoted to fighting for principles of academic freedom and free speech,” Fink told Campus Reform, alleging that “like UCLA, the AAUP is not giving grants to those who support the travel ban, America's sovereignty, and national security.”

Following his ordeal at UCLA, in fact, Fink has indicated that he intends to start a nonprofit organization dedicated to advancing the cause of free speech on college campuses.

Similarly, former California State University-Northridge Professor Robert Oscar Lopez claims he was “blown off” by the AAUP after being hounded into early retirement for suggesting that children of same-sex marriage are discouraged by the gay community from discussing their negative experiences growing up—a subject Lopez could speak to from personal experience, being the child of a same-sex couple himself.

“I reached out to AAUP and was completely blown off,” Lopez told Campus Reform. “They are a useless organization full of bias.”

Meanwhile, Marquette University Professor John McAdams, who is at the center of a longstanding case involving threats to academic freedom, explained to Campus Reform that although the AAUP initially objected to his suspension (which he received for writing a blog post critical of a student-teacher who wouldn’t allow students to debate the propriety of gay marriage), it later “refused to support” him when the school imposed an unpaid suspension and demanded that he apologize.

“The AAUP initially supported him but abandoned the case the moment that the Marquette administration assembled a panel of liberal faculty members who supported its absurd claim that the university had an unwritten and never before disclosed rule against faculty members criticizing students by name,” Randall alleged.

McAdams agreed with Randall’s assessment, saying that when “a faculty committee gets to decide what speech from a professor can be punished, and what can’t, views unpopular with the faculty will have less protection.”

According to an email exchange obtained by Campus Reform, McAdams attempted to spell out the “procedural irregularities” surrounding his case in a letter to Gregory Scholtz, director of the AAUP’s Department of Academic Freedom, Tenure, and Governance.

In his email, McAdams pointed to six such irregularities, among which were Marquette’s refusal to hand over potentially pertinent information to his legal team and its failure to require the recusal of a hearing committee member who had previously signed a petition against McAdams.

McAdams, however, told Campus Reform that Scholtz “blew them off,” providing an email Scholtz sent him in response saying that he appreciated McAdams’ concerns “that irregularities occurred,” but then dismissed those concerns by remarking that he had “never encountered a dismissal process that all parties agreed was entirely free of irregularities.”

“Their position was that I had received ‘due process’ from the Faculty Hearing Committee, and that was all I deserved,” McAdams told Campus Reform. “They seem to view ‘academic freedom’ as a collective right the faculty have, not a right that each faculty member has. Thus, views unpopular with the faculty generally will get little support from the AAUP.”

As was the case with Fink, McAdams noted that due process—especially on a “contemporary campus”—offers “scant protection to views unpopular among the faculty,” pointing out that “in addition to ideological bias, there is the fact that campus bureaucrats can load committees with people who are keen on currying favor with the administration.”

“The real story,” according to Randall, “is that McAdams is a conservative at odds with the Marquette administration on several of its policies.”

“The AAUP to its shame sided with a university administration to suppress the legitimate academic freedom of a faculty member. McAdams’ conservatism was not incidental to the case, but its very essence,” he added, though both Randall and McAdams find that poor treatment of conservative professors is not the only issue in the AAUP’s position.

In fact, both expressed concern that the AAUP has abused the term “academic freedom” by treating it as a license for liberal professors to say whatever they please without criticism.

“The First Amendment, of course, protects freedom of speech from government interference, but academic freedom is a different idea: it is the freedom to pursue research, publish, and teach according to the standards of a scholarly discipline, and protects faculty members from academic administrators and colleagues who, out of disagreement with a faculty member’s ideas, would try to silence him,” Randall explained, saying the AAUP has expanded the definition of academic freedom to include “virtually anything a faculty member might say” and has thus “drained it of any real meaning. “

McAdams views things a similar way, saying the AAUP takes the position that academic freedom includes “not only the right of professors to teach and preach what they wish, but a right not to be criticized for doing so.”

“The negative view of the AAUP toward media outlets like Campus Reform suggests a rather parochial view of academic freedom,” he continued. “Going beyond merely defending professors’ right to express controversial opinions, they seem to believe that professors should be protected when their extreme opinions are exposed.”

Randall, in a final thought, suggested that without a “radical transformation” of the AAUP, it cannot be taken seriously as a defender of academic freedom.

“Absent radical transformation, the AAUP should be regarded as a politicized guild, and not as disinterested partisans of academic freedom,” he said. “While we cannot speak for what goes on in the minds of the AAUP's officials, their selective silence speaks volumes.”

Campus Reform reached out to the AAUP for comment on the matter, but did not receive a response.