The Union City High School students were on a class trip to Washington D.C., and decided to stop at Howard University for lunch along the way, with two of them wearing Trump’s popular MAGA hat.

"There were visitors on our campus who were wearing paraphernalia that showcased their political support."

Howard students quickly took to social media to shame the Trump-supporting high schoolers, saying, “who told these lil yt girls they could come to the HU like it was about to be some joke.”

In response, another student suggested asking the visitors to “meet you behind south” so she could “beat the f*ck out of them.”

Multiple organizations affiliated with the university eventually responded to the incident, though only to assure students that the female high schoolers had left campus.

“We will take any action necessary to ensure that HU students feel safe and comfortable in our dining spaces. This group is no longer on campus,” the school’s dining services office tweeted.

The university itself released a similar statement warning students that “there were visitors on our campus who were wearing paraphernalia that showcased their political support,” adding that while it is “an institution where of thought, choice, and expression are ever present,” it would “never compromise [its] values or allow other to convince [it] to do so.” 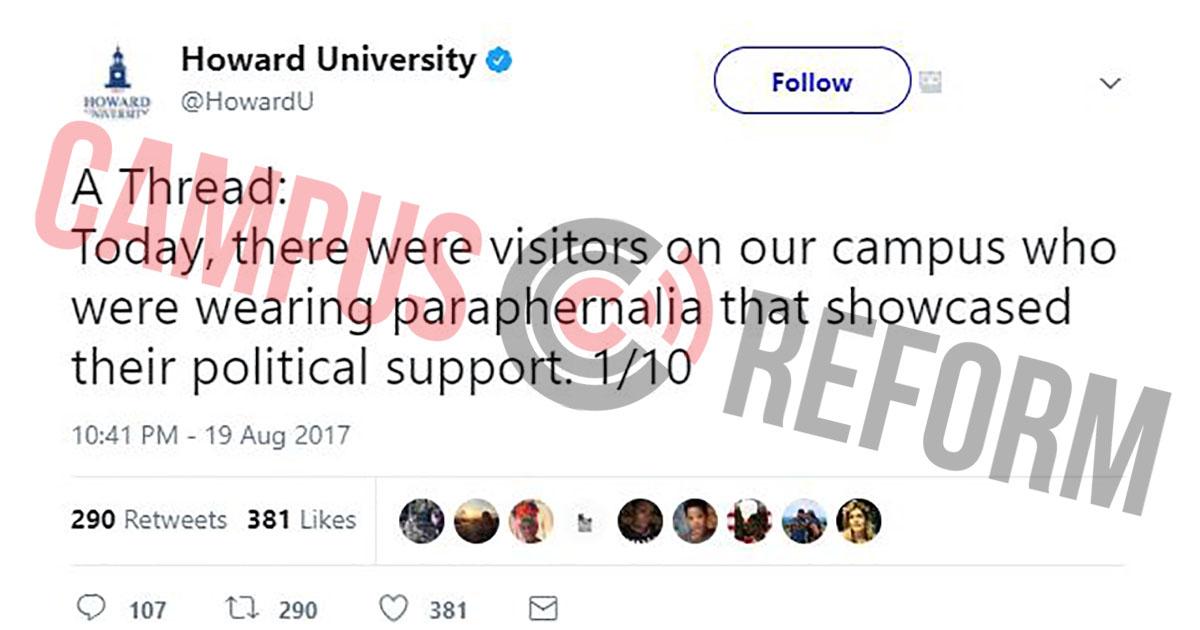 “Truth, service, and justice for all and bigotry cannot occupy the same space, so we’re glad you decided to leave. We aren’t going anywhere,” the organization added.

The two Trump supporters, however, stood by their decision to sport MAGA hats on campus, noting that while they were unaware that Howard “is a predominantly black school,” that fact should not have mattered.

“What happened to my friend and I today was absolutely pathetic,” wrote one of the students, Allie Vandee, saying she and her friend had been able to “visit many different historical places in DC without being harassed by anyone for supporting Donald Trump.”

Vandie goes on to note that one Howard student exclaimed “f*ck y’all” as he passed by, while another even stole one of their hats.

“This is America. These are the people who are racist and disrespectful,” she concluded. “I will never be embarrassed for supporting Donald Trump.”

Campus Reform reached out to the university for additional comment on the incident, but did not receive a response in time for publication.