The University of Cincinnati recently caused a stir by tweeting a link to a recent study purporting to find that “anger [is] linked to conservative economic views.”

"Insulting [alumni] leads to 100% chance of sending your fundraising appeals directly to the trash bin."

“When you make people angry, you also make them more competitive,” Salerno explained. “If you think about competition, it’s about trying to win out over someone else, and it’s usually over some type of valuable or desirable resource. By making people more competitive, we think that people become more focused on acquiring resources.”

Conversely, respondents who were prompted to reflect upon things that made them grateful were more likely to report liberal-leaning economic views, such as resource redistribution.

[RELATED: Prof tries to get conservatives fired over FB argument]

The university subsequently tweeted a link to the news release from its official Twitter account, prompting an outpouring of criticism, including several indignant responses from donors.

“Study: Needlessly insulting @uofcincyalumni (like me) leads to 100% chance of sending your fundraising appeals directly to the trash bin,” wrote one irate alum, while another conservative user declared that “The tweet's purpose was to alienate us, make no mistake. Otherwise they would have posted something more accurate like ‘competitiveness.’" 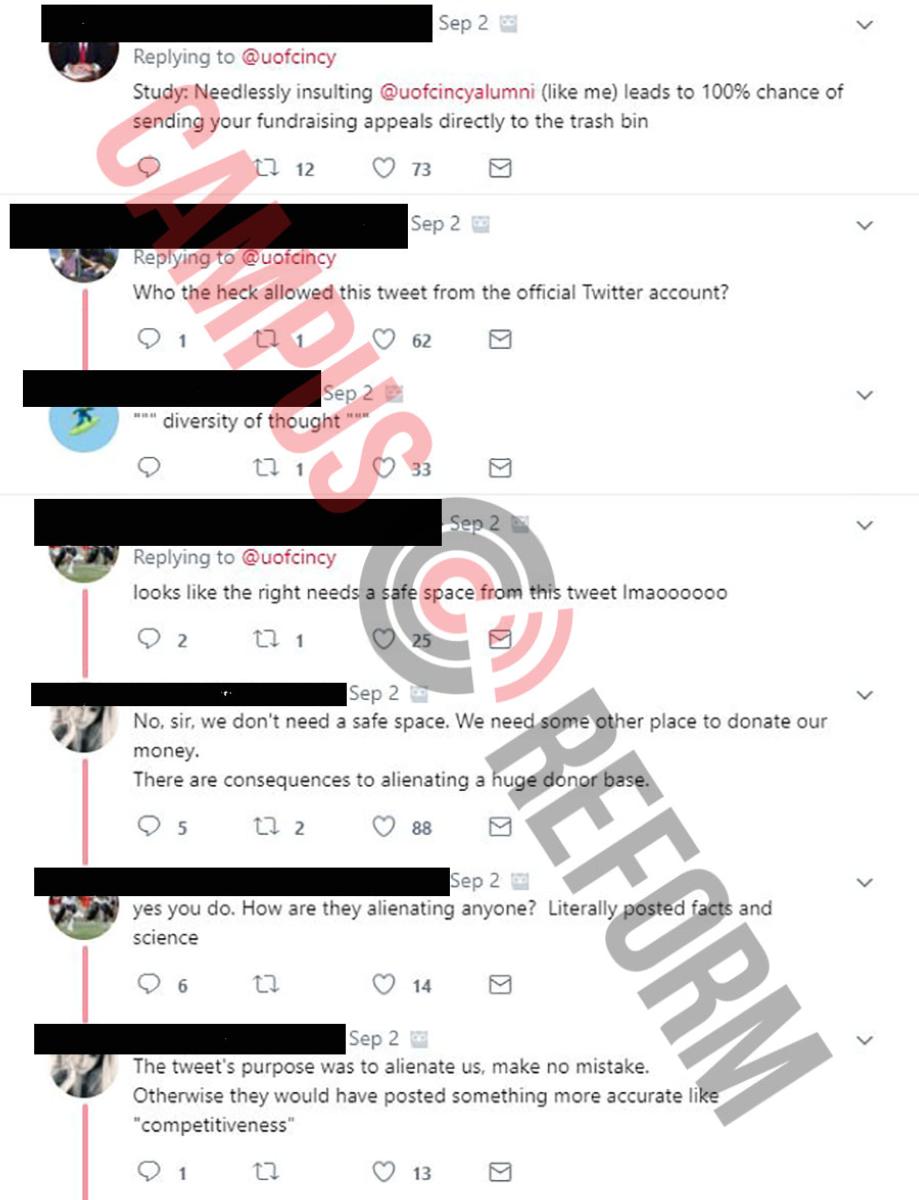 The Cincinnati Republic also took issue with the tweet, noting that apart from using “an incredibly provocative caption that does not wholly reflect the findings of the study,” the school’s Twitter account “has rarely shared any studies, but has always been used for promotional purposes.”

“By disregarding the foundational basis in reality of laissez-faire economic policy, the conductors of this study attempt to link emotion to an inherently unemotional policy,” argues Brad Johnson. “After all, it is in the name of empathy that more progressive economic policy stances find their foundation. Whereas conservative economic policy is drawn from classical liberalism, as true American Conservatism is the closest thing to it in existence today.”

The University of Cincinnati told Campus Reform that such objections are misplaced, however, noting that it used a lower-case "c" in reference to conservatism.

"The item is using the word conservative with a lower-case 'c' so to speak, in other words in the classic meaning or sense of 'cautious,' 'orthodox' or 'marked by moderation' (In fact, if you look at the body of the text, you will indeed find that the word conservative is lower cased in the second and tenth paragraphs)," Director of Public Relations M.B. Reilly asserted. "It would seem that some are perhaps perceiving the term as a capital 'c,' in other words as signifying and/or limited in meaning to a specific political party vs. the term's broader definition and connotation."